10 Words and Phrases to Never, Ever Use at Work 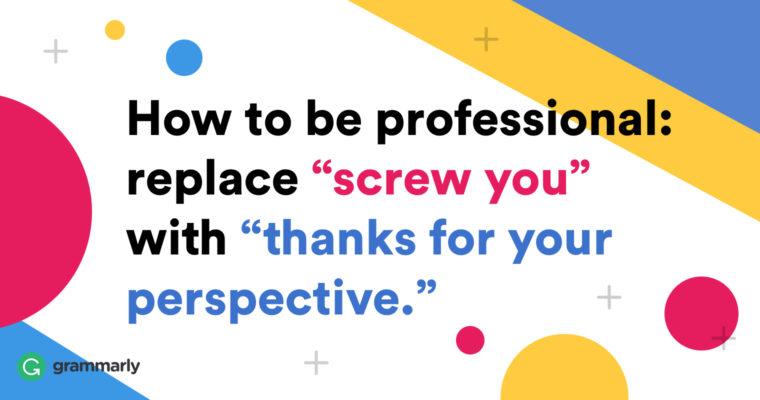 Every industry has its jargon. But some words and phrases can be unclear, unnecessary, or even offensive. Maybe some of these are phrases you like building into your business vocab, but use them with caution. If you’re going to offend or annoy someone, or if there’s a clearer way to say something, why not go the easy way?

Our little caveat: every office has different protocol. If you’re buddies with your coworkers, it’s not so strange to talk to them about personal issues. And if you’re in the thick of the consulting, tech, or business world, you might feel inclined to use the lingo and play along. But the joy of language is that there’s always another way to phrase something.

We’ve all heard it: “When you assume, you make an ass out of you and me.” Cute. But even if the catchphrase earns your eye-roll, it’s a good point: don’t accept something to be the case without proof. For example:

“I assume you finished the report?” “I assumed Bob would run that part of the presentation.” “I assume you’ll be working on Saturday?”

From a boss, “assume” is a passive-aggressive way to show authority. From an underling, it looks like ducking responsibility. In both cases, there are ways to make your point without making an ass out of you and me.

“I like these doughnuts” is fair game. But avoid using “like,” “um,” “sort of,” “basically,” and other weasel words that fill dead air. They make you sound less confident and can even sort of give the impression that you basically don’t know what you’re, like, talking about.

See what we mean?

Or, “I finally got that $10K raise,” or even “I’ve never eaten there because it’s too expensive.” Good rule of thumb: avoid stating the amount of money you make or the pile of dough you spent on your trip to Iceland. If someone makes a lot more or a lot less than you, it could lead to awkwardness.

Some business folk use this to mean “reveal information,” but it doesn’t necessarily come across that way. It’s a good idea to steer clear of words that could be misinterpreted or cause offense, even if they’re not meant that way.

Not everyone who works is a man, and even seemingly innocent phrases like “Hey, man” or “What’s up, dude,” when used between people who identify as men, can create an environment of exclusion. Nicknames in general can help build a bond of casual camaraderie—but when that bond is based on being the same sex, that means anyone who doesn’t fall under the category of “man” or “dude” is excluded from the camaraderie.

Most people who use these phrases aren’t being exclusive on purpose. But by calling out a connection based on something that other people in the office don’t share, these “dudes” might be making it harder for women to build the connections that will get them ahead.

“Talk about it”? “Discuss it”? “Have a meaningful and productive dialogue about the issue and its repercussions”?

Here’s why Grammarly doesn’t like this phrase: “talk” is not traditionally a transitive verb because it doesn’t take a direct object. You can talk about something, but that’s an intransitive verb with a prepositional phrase: a very different category.

While phrases like “we can talk it out” or “let’s talk things through” have shown the potential for talk to take on transitive qualities, “let’s talk that” is a step too far.

If you’re pointing out someone else’s mistake, you seem blaming and harsh; if you’re talking about your own, you risk undermining your coworkers’ sense of your abilities.

Here’s how to turn it around: if you messed up, find a task too tough, or aren’t sure how to address a problem, don’t start in with “I can’t,” “it’s hard,” or “I failed.” Find someone to ask for help and tell them what the problem is, what you’ve tried so far, and what you need to know or do to fix it.

On the flip side, some companies love talking about failures as opportunities for learning and growth. If you work in an environment brimming with that kind of positivity, kudos. But no matter whether your company embraces the word “failure” or avoids it like the plague, same idea goes: focus on next steps and ways to learn moving forward, not on who’s to blame.

Everyone loves kids, right? Sure, once they’re out and about in the world. The details of your experience are better kept to yourself. When it comes to labor, keep it to the kind you do with your coworkers in the office Monday to Friday.

In business, “throw it over the wall” can be translated as “send it to the client.” This is one of the cases where jargon gets in the way of clarity—and that can, in turn, lead to things not getting done. If you want to be understood, this is a phrase you can throw over the wall—as in, get rid of it.

If your goal in the office is to think outside the box, why not do the same with your well-worn clichés? There’s nothing really wrong with this phrase, but it’s been used so many times that we dare you to find new ways to express the idea. You can keep it simple, like “innovate,” “find unusual solutions,” or even “come up with creative ideas,” or you can invent something totally new like “think one galaxy over.” (Though if you’re going for clarity, you might want to stick to “brainstorm.”)

Either way, if you’re trying to find creative solutions at work, you might as well think outside the box in how you use language, too.