What Is Irony in Writing? An Unironic Guide 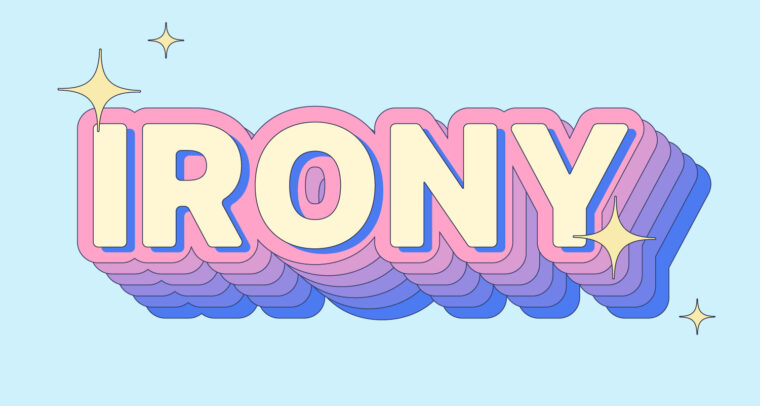 The protagonist in your story has waited all week for a check to come in the mail. Now they open up their mailbox, spy an envelope that looks promising, and eagerly tear it open to discover the exact bill they didn’t want to see. Argh and hello, cursed daggers of irony.

(Okay, maybe that last sentence is a bit dramatic, but so are many of the writerly applications of irony. Gird thyself.)

Widespread but widely misunderstood, irony turns an audience’s expectation on its face. Irony can be sad, comical, or both, and it’s commonplace in storytelling and conversation. If you’re alive to it, you can also find irony quietly running through daily life.

There are several different types of irony a crafty writer has at their disposal. Below, we’ll unpack definitions and examples of three main kinds you’re likely to come across or employ in your own writing: verbal irony, dramatic irony, and situational irony.

What is verbal irony?

Verbal irony is when what’s said and what’s clearly meant are at odds, subverting expectation.

This sometimes overlaps with sarcasm, but not always. Consider the moment in Star Wars: The Empire Strikes Back when Princess Leia and Han Solo kiss goodbye: Leia says “I love you,” only for Han to respond “I know,” tweaking the expectation he might say something more heartfelt and reassuring. It’s verbal irony, but sarcasm it ain’t.

By contrast, sarcasm is often humorous or biting, as when Helena Bonham Carter’s character in Fight Club remarks “I got this dress at a thrift store for one dollar,” and the antihero played by Edward Norton replies, “It was worth every penny.”

Other forms of verbal irony include overstatement and understatement. For instance, in Shakespeare’s Hamlet, when asked where Polonius is, Hamlet answers, “…if you find him not in this month, you shall nose him as you go up the stairs into the lobby… He will stay till ye come.” This is our sad, vengeful boy’s understated way of saying Polonius is slain.

Did we mention that irony is always fun and hilarious? (Ironic overstatement.)

One last key characteristic of verbal irony: It’s always intentional on the part of the characters. Not so with the next two types we’ll discuss.

What is situational irony?

Situational irony plays with the audience’s expectations of things either because something doesn’t end up happening or because its opposite happens.

For an illustration from Romeo and Juliet, look no further than, well, all of it. The situation at the jump concerns two families feuding so hard they literally draw swords on each other in the street. The central conflict then kicks into higher gear when our eponymous star-cross’d lovers have the ghastly misfortune to, well, notice and like each other.

Another brutal example would be Flannery O’connor’s short story “A Good Man Is Hard to Find,” in which a grandmother urges her road-tripping family to avoid Florida altogether, because a murderer known as the Misfit was last spotted there. Later the grandmother suggests a detour that, alongside an unfortunate incident involving a cat she insisted on bringing, launches the family straight into an encounter with that very same murderer.

>>READ MORE: How to Write a Persuasive Essay

What is dramatic irony?

Dramatic irony takes advantage of gaps between what the audience knows and what the characters know, so while we can recognize something said or done is mistaken, they can’t.

This can be painful to observe, as in the opening of Celeste Ng’s debut novel, Everything I Never Told You. It provides such a sad, remarkable example it’s worth block quoting:

Lydia is dead. But they don’t know this yet. 1977, May 3, six-thirty in the morning, no one knows anything but this innocuous fact: Lydia is late for breakfast. As always, next to her cereal bowl, her mother has placed a sharpened pencil and Lydia’s physics homework, six problems flagged with small ticks.

Oof. Compelling stories bear no obligation to be fun, and in this respect, dramatic irony can be a powerful instrument.

What other types of irony exist?

Escalating upon and overlapping with dramatic irony, we also have tragic irony. Returning to Romeo and Juliet, an example of this occurs near the end when, as the audience, we know Juliet is merely dozing, but Romeo does not, and the play’s signature tragedy ensues.

Lastly, we’ll cover “cosmic irony,” a flavor of situational irony. If you’ve ever felt like the universe was playing a joke on you, that’s how characters experience cosmic irony.

Consider the paleontologist at the center of Jurassic Park. His aversion to children is demonstrated early and often, only for the whims of fate (or in this case Steven Spielberg and one very large dinosaur) to later find him sweetly nestled in a tree with the two kids he’s protecting while one tells corny jokes.

So where is a writer in need of a break from irony to turn? Sincerity—when you boldly cow to expectations with no funny business or clever words that don’t mean what they say, instead simply giving the people what they want.