Uptalk? and Vocal Fry? An Epidemic?

Shundalyn Allen
Updated on May 27, 2019Lifestyle 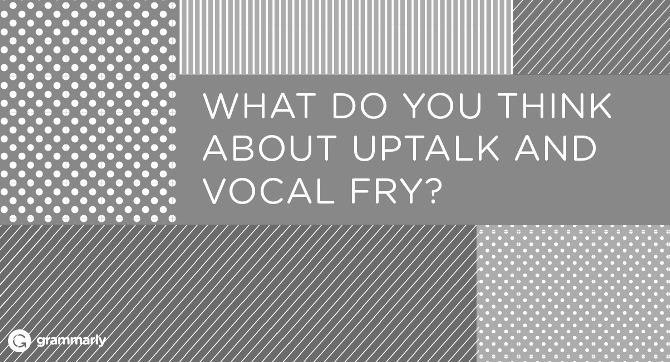 Some comedians create entire routines of celebrity impressions. Many times, the comedian doesn’t announce who he is mimicking. The audience recognizes the famous person’s voice, intonation, accent, and word choice. The better the comedian impersonates the star, the more hilarious the audience finds the routine. Other comedians imitate regional accents, like the drawl associated with southerners or the way Bostonians make Rs sound like Hs.

Comedians love to mimic Valley girls. The Valley girl dialect, Valleyspeak, began in California, but now a Valley girl is anyone—from middle-class woman to teenager to surfer—who talks in a certain way. The unfortunate stereotype is that Valleyspeakers are vapid and easily excitable. Two traits characterize their speech: uptalk and vocal fry. Let’s examine these two speech patterns one at a time.

So? What is? Uptalk?

Uptalkers put an upward inflection on the final word of a statement. In English, rising intonation indicates questions, so uptalk statements sound like questions. Some feel that uptalk is still changing and is becoming more like questioning. In addition to ending statements with interrogative intonation, some uptalkers seem to raise their voice after every couple of words. A sentence? may sound? like a series of queries? You might be thinking, so what? You can tell a statement from a question from context, can’t you? This is often true, but according to public speaking coach Diane DiResta, “This vocal pattern will not serve you well.” She explains that people should avoid uptalk because it makes the speaker sound tentative. In a business environment, halting speech can undermine your authority, making it sound as if you are not sure about the facts you present.

The FYI on Vocal Fry

Vocal fry refers to sound created by a specific movement of the vocal folds. Normally, vocal folds rapidly open and close as air passes through them. However, if vocal folds close completely for brief periods before opening, the vibration causes a strange sound. Perhaps this is how this phenomenon got its name; some describe it as similar to the sizzle of food frying in a skillet. Not everyone hears a frying sound; one article lists popcorning, croaking, and creaking among its ten alternate names.

So, why do people produce vocal fry sounds? Some illnesses affect the voice box and make vocal fry more likely to occur. A few languages, such as Zapotec Mayan, use these glottal sounds to differentiate vowel sounds. However, some perfectly healthy Americans use these low, rattling sounds in regular conversation. A famous example is Kim Kardashian. Regardless of whether her speech style is natural or contrived, many of her fans intentionally adopt her way of speaking.

If uptalk makes you sound unsure, how does vocal fry make you sound? In 2014, The Atlantic polled people to see if they preferred a normal voice to a voice with vocal fry. The listeners overwhelmingly preferred the normal voice, and more than eighty percent of them said they would be more likely to hire a person with a normal voice than a person with a “fry” voice. For “fry-voiced” women, the chances of being hired were even more negatively affected. A research article explains:

Like uptalk, it seems that vocal fry can negatively impact work relationships.

What should you do?

Does that mean you should try to eliminate vocal fry and uptalk from your vocal repertoire? Not necessarily. The study participants mentioned earlier did not have natural fry voices. They were instructed to speak in a lower than normal register, so listeners may have been responding negatively because something about the speakers rang false. Recruiters do not hire based on voice alone; they weigh your qualifications, education, and experience, along with other factors. In office interactions, you build a reputation. If your reputation is favorable, it is likely that your coworkers will respect you no matter how you talk. In reality, you are most likely to use uptalk or vocal fry with peers who speak the same way. Using one or the other may even strengthen your group identity.

Speech and intonation are important to communication, but your conversational partner will likely understand what you say as long as you use proper grammar and pronunciation. In a work environment, you may weigh the pros and cons of intentionally using uptalk or vocal fry. If you decide it’s the way you want to talk, you may find that others tease you with a little mimicking. If they do, you may want to remind them what’s been said about imitation: It’s the sincerest form of flattery.