Grammarly
Updated on
May 19, 2022Grammar 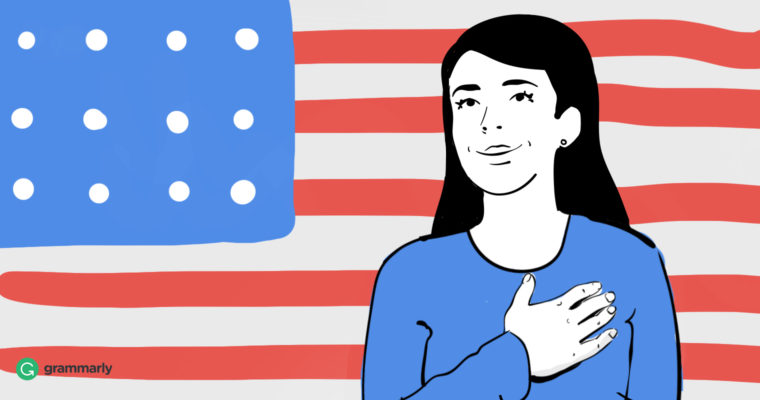 On the morning of September 14, 1814, the sun rose to reveal a surprising sight to Francis Scott Key.

Just a month after the British had burned the White House during the height of the War of 1812, Key was aboard a British vessel negotiating the release of a friend who was being held prisoner. During Key’s time aboard the vessel, the British commenced an attack on Fort McHenry and the pair was not allowed to leave. So Key and his friend watched from the ship as the British bombarded Fort McHenry.

After a day and a long night in which Key thought for certain that the American fort was doomed, he was shocked when the early morning light revealed that the American flag was still there. Still aboard the British vessel, Key began to pen the words that would later become the American national anthem.

Some time later, Key’s brother-in-law paired the poem with the tune of the English drinking song “To Anacreon in Heaven” by John Stafford Smith and began distributing the song as “Defence of Fort M’Henry.” Eventually, the song was published in the Baltimore Patriot newspaper and soon after spread across the country as “The Star-Spangled Banner.” It was played at official events across the nation, officially becoming the national anthem in 1931.

While Key penned three more verses in addition to the well-known first verse, these are the only words that most Americans know:

O say, can you see, by the dawn’s early light, What so proudly we hail’d at the twilight’s last gleaming? Whose broad stripes and bright stars, thro’ the perilous fight, O’er the ramparts we watch’d, were so gallantly streaming? And the rockets’ red glare, the bombs bursting in air, Gave proof thro’ the night that our flag was still there. O say, does that star-spangled banner yet wave O’er the land of the free and the home of the brave?

What Does the National Anthem Mean?

This is the first verse of the “Star-Spangled Banner.” Breaking it down line-by-line reveals some words and phrases that, despite being sung so often, may not make sense to most people.

“O say, can you see, by the dawn’s early light, What so proudly we hail’d at the twilight’s last gleaming?”

These lines ask listeners if they can see the American flag waving over Fort McHenry as the sun begins to rise. The flag is a symbol of how the Americans held the fort against all odds, so if the flag hadn’t been there, Key would have known the fort was defeated. Key held onto the flag as a symbol of hope as he watched from the British vessel, catching sight of it as the sun set, twelve hours after the British bombardment began.

“Whose broad stripes and bright stars, thro’ the perilous fight, O’er the ramparts we watch’d, were so gallantly streaming?”

This bit describes the American flag flying throughout the battle.

“And the rockets’ red glare, the bombs bursting in air, Gave proof thro’ the night that our flag was still there.”

There aren’t that many challenging words in this part, where Key describes how the British bombs occasionally lit up the American flag that was flying throughout the night.

“O say, does that star-spangled banner yet wave O’er the land of the free and the home of the brave?”

In this final verse, Key asks one last time if the flag is still there, waving over a country born from revolution and still fighting to maintain its hard-won freedom.

Cool Fact: March 3 is recognized in the United States as National Anthem Day.