How to Use Transition Sentences for Smoother Writing 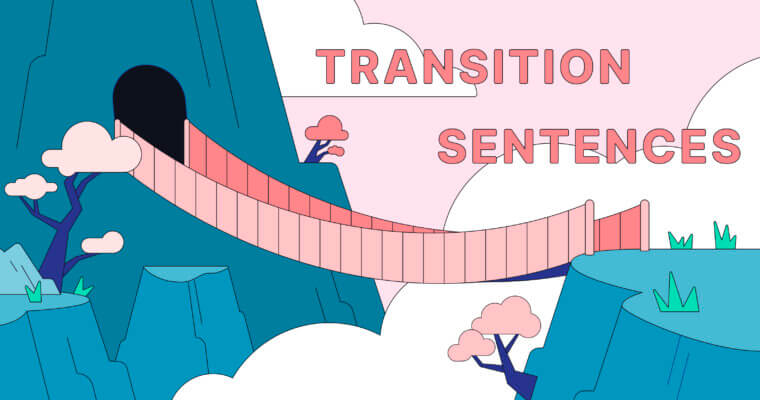 ​​In most instances, your writing follows a logical path from your introduction to your conclusion, stopping at various supporting points along the way. Transition sentences enable your writing to progress down this path in a clear, logical manner.

Transition sentences, as their name implies, express the transitions between thoughts that link them together. They’re the segues that communicate the how, when, where, why, and other relationships you explore in your writing as you move from the introduction to the conclusion, incorporating all relevant supporting points along the way.

What are transition sentences?

Transition sentences are the sentences that show the relationship between two or more ideas. Think of them as bridges, tunnels, and merges that connect different sections of your work, with specific words and phrases acting as road signs. Take a look at this example:

What makes a good transition sentence?

A good transition sentence is one that makes the relationship between the ideas it’s linking absolutely clear. It’s one of the most important tools in your writing toolkit because no matter what you’re writing—or whether you’re working on a short story, a blog post, a news article, or a lengthy academic work—being able to express your ideas in a clear way that your reader understands is key.

The best transition sentence to use in a given situation depends on what you need to communicate. For example, if you need to communicate a point that contradicts your previous statement, an effective transition sentence is one that includes a word or phrase such as however, despite this/that, in contrast, or nonetheless. Take a look at these examples:

Transition words and phrases are the road signs we mentioned earlier that direct your writing’s flow from one thought to the next. The transition word you choose for a sentence is critical to your reader’s ability to understand your writing because in many cases, otherwise identical sentences can have very different meanings if they have different transition words. Here are quick examples of how word choice can transform one idea:

Transition words and phrases to demonstrate cause and effect

Transition words and phrases to illustrate a sequence

Beyond writing strong sentences by using transition words and phrases, you can harness these valuable tools to write more effective paragraphs. Generally, the ideal place for a transition sentence is the beginning of a paragraph because this is where you explain new information’s relevance. Your transition sentence should do two things: introduce its paragraph’s topic and give it context within your piece as a whole.

Take a look at this example of a strong transition sentence between paragraphs:

We hiked all day. After a few hours, my friend, my dog, and I all started to feel weary, taking more frequent rests than we’d taken at the beginning of the hike. But once we caught a glimpse of the mountain’s peak, we felt rejuvenated and powered through the last leg of the way up. We’d spent months planning this trip, and now we were finally there.

After we reached the peak, it was time to decide the best way to go back down the mountain. Somehow, it felt anticlimactic—months and months planning this hike, visualizing ourselves standing atop the tallest mountain we’d hiked to date and now, standing in that position, all I felt was the exhaustion I knew would come with maneuvering our way back down and out of the woods as the sun set.

In the example above, the use of “after” to initiate the transition creates a contextual contrast between the general ideas in each paragraph. Keep in mind, the kinds of transition words and phrases that work within paragraphs aren’t always the ones that work best to transition between paragraphs. For example, starting off a new paragraph with a word like “therefore” or “similarly” usually can’t introduce the following information sufficiently.

Take a look at these transition sentences and how they can be used to guide a reader through large sections of your work:

By 2018, it was apparent that we lagged behind our competitors in one key area: providing self-serve checkouts. Every other big-name service center utilizes this kind of system and has seen an increase in sales and in-store efficiency once implementing it.

Now that we’ve upgraded every service center to the new, fully self-serve system, our company is weighing which large-scale project is most pressing to complete over the next year. There are a few areas with significant room for improvement, each of which comes with its own unique challenges.

One area of interest is employee retention. Currently, we have a similar turnover rate to our competitors, which costs the company millions in training and other onboarding costs every year. Lowering our turnover rate would reduce this expense, but exactly how much we can realistically lower our turnover rate is yet to be seen. Another key area our team identified as having room for improvement is our online presence. We have identified potential strategies for increasing our online presence as well as potential hurdles that could arise, which we’ll cover in detail in the following paragraphs.

As we mentioned earlier, the transition sentences you’d use to introduce new paragraphs usually aren’t the ones you use to transition from sentence to sentence within a paragraph. These sentences have a much narrower scope and work best for tighter transitions, such as comparing details about ideas rather than comparing the ideas themselves.

The best days of my childhood were the days I spent up at my grandparents’ cabin on the lake. I learned how to swim. My grandfather took me to a small, shallow cove where I practiced all the basics. I was a confident swimmer.

The best days of my childhood were the days I spent up at my grandparents’ cabin on the lake. That’s where I learned how to swim. Every afternoon, my grandfather took me to a small, shallow cove where I practiced all the basics. By the time I was eight, I was a confident swimmer.

Fit every word and phrase into your writing with ease

Transition sentences are one of the keys to smooth, flowing writing. When you’re not sure if the transition sentence you’ve chosen is the right one for your work, Grammarly can help. Our writing suggestions catch spelling and syntax mistakes and grammatical errors and can even detect the tones present in your writing. When the word you chose isn’t the right one for the point you’re making, Grammarly can suggest one that is.