The Basics of Verbing Nouns

Let’s join the nearest imaginary business meeting where a group of people is dialoguing:

“We’re all set, but we need to table that topic for next time.” “You want me to calendar that meeting?” “Yes. Prioritize this topic and action the other two. We can fast-track this project for completion.” “But not without workshopping it. We’ve got to beef it up.” “There’s no way to task anyone with this without approval.”

Are you lost or does this conversation seem familiar to you? If it’s the latter, blame your colleagues or your friends, because you’ve been desensitized to verbing. You may be a verbing perpetrator as well. Verbing, or what grammarians refer to as denominalization, is the act of converting a noun into a verb. If you can’t find an existing verb to describe what you’re doing, just verbify the nearest noun! 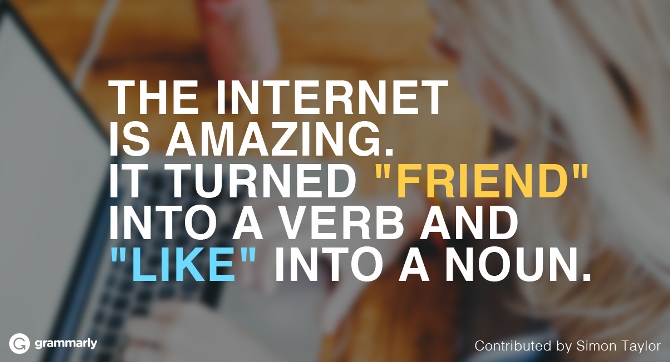 The purpose of verbing is to make what we say immediate and to-the-point. During situations in which a word is used repeatedly, as in a business meeting, verbing seems more common. In English, it’s easy to do because the base forms of verbs don’t need special endings. For example, English can use the noun action as a verb simply by using it in a verb position within a sentence. But verbing the word action in French requires you to add a special ending to the word, which would leave you with actionner. To some, verbing makes what you say sound fresher and less traditional. To others, it’s akin to workplace-appropriate slang. Benjamin Franklin said in a letter to Noah Webster that denominalization is “awkward and abominable.”

Throughout history, verbs have entered the English language through nouns; in fact, the first instance of the word verbification dates to 1871. The process follows a reliable pattern: a verbification is introduced, people use it, the media picks it up, and it becomes part of our lexicon. Today, the following verbs-born-from-nouns are commonplace:

It might be difficult to imagine these words only as nouns now, but there was a time when that was the case. For example, the earliest known usage of “to medal” appeared in a newspaper in 1966, but “medal” was first recorded as a noun in 1578. It can be argued that the time it takes to verbify a noun is becoming shorter, which causes some people to protest. For example, to Google was named “the most useful word of 2002” and entered the Oxford English Dictionary in 2006, although Google had been around since 1997. Compared to the 388 years it took for medal to be verbified, Google’s five years are meager.

If nouns become verbs so quickly, how can we adapt to sudden changes in the language? Won’t we all be verbing instead of using the perfectly good verbs we already have? Some nouns that are currently undergoing verbification are:

AirBnB: We no longer “rent a home or condo on AirBnB;” we say, “I AirBnBed.” eBay: We don’t “sell it on eBay;” rather, we “eBay it.” Coffee: We don’t “meet for coffee;” rather, “we coffee.” Beer: “Pass me a beer” has become “beer me.” Friend: “She added me as a friend online” has become “she friended me.” Heart: We no longer express that we like or love something; we “heart it.” Netflix and chill: Instead of “Do you want to come over to watch Netflix and chill?” we simply say, “We Netflixed and chilled.”

Some grammarians argue that the English language is so fluid that verbing is inevitable. However, in formal writing, you’re better off choosing an established verb to express yourself. At work, you don’t need to “incentivize” when you could simply “create incentives.” And instead of “showcasing” your work, just show it.

If you’re concerned that you may have become desensitized to verbing, use Grammarly to catch and correct verbifications in your writing. It’s just one of the many reasons to heart Grammarly.