27 Texting Abbreviations: What They Are, Why They Exist, and How to Use Them 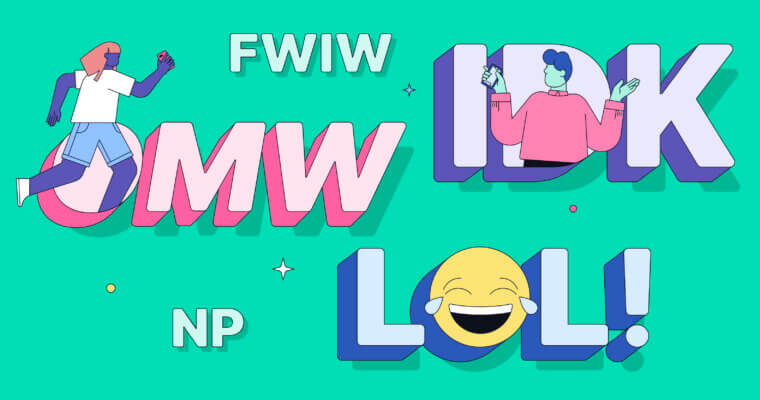 Texting has now been around for over 25 years and it’s estimated that 8 trillion text messages are sent globally every year. Like it or not, texting abbreviations (like the ubiquitous “LOL”) are very commonly used in messages—and not knowing their meaning can at best cause confusion and at worst get you in trouble.

And by the way, the correct terminology is “texting abbreviations”—you may have also seen “text abbreviations,” but this vaguer term is incorrect.

In the olden days before “unlimited talk and text” data plans, text messages were expensive to send and receive, and because they were limited to 160 characters per message, every character was precious.

Read on for our essential list of common texting abbreviations so you don’t make the mistake of sending an “LOL” when “my deepest condolences” is the appropriate response.

Tacos for lunch bc it’s Tuesday!

BTW: By the way

BTW I ate your plums in the fridge. So sweet, so cold!
Your new blog post is going viral on Twitter btw.

Thanks for responding to my “roommate wanted” ad. DM me for more info and photos of the room.

The phrase “sliding into her/his/their DMs” (which has inspired many memes) typically refers to an admirer sending a bold or suave direct message to a stranger in order to spark a flirtation.

Btw I just read this guy’s essay on the Oxford comma. Swoon! Am sliding into his DMs.

FTW: For the win

The exact origins of this phrase are debated—Hollywood Squares, rugby, and World of Warcraft have all been cited as popularizing it. It’s typically used as a rallying cry or as an exclamation of celebration, sometimes ironically.

Almost finished with my final class project. One more late night ftw!
Big client meeting this afternoon and my lunch explodes all over my white blouse. Tacos FTW.

FWIW: For what it’s worth

IDK what you mean, and IDC. Acronyms FTW.
Why does no one know what IDK means?

ILY: I love you

IMO: in my opinion

“IMHO” (“in my humble opinion”) is another common variation.

IMO that rug really tied the room together.

This phrase is typically used to differentiate between online (or media) personas, and how things are in reality.

Did you know Jon Snow and Ygritte are married IRL?
It looks big in photos, but irl the Mona Lisa is tiny.

You might genuinely use this texting abbreviation while joking around, but it’s also frequently used to indicate sarcasm.

Hey, LMK if you want pizza or tacos for dinner tonight.

Occasionally mistaken for “Lots Of Love,” LOL is one of the most widely known texting abbreviations and has been around for almost 30 years.

Originally it was used in texting and chatting to communicate that you found something so funny that you were literally moved to laughter. Over time LOL has evolved from its original meaning and is now typically used to signal that you’re amused or even just tracking with what the other person is saying (like a virtual nod).

Me: Been waiting 30 minutes for my train, but I’m so into this novel I didn’t notice it was late!

Wondered why my mac n’ cheese was bland, then realized I forgot to add the cheese packet. LOL

Can be used to genuinely say that something isn’t that important, but can also be used to downplay a brag or sarcastically to show what a big deal something actually is.

I’d like the mango mochi ice cream, but nbd if they only have strawberry.
Chatted with Neil Gaiman for 10 minutes at a book signing and by some miracle did not make a fool of myself. NBD

NP that you’re running late, I just left the house too.

NSFW: Not safe for work

Here’s the link to the music video, but wait till you get home to watch, it’s NSFW.

Can you buy more ketchup?

Oh nvm, just found the bottle in the door.

A popular and long-used abbreviation, the Oxford English Dictionary has traced usage of “OMG” back to the early 1900s, but this exclamation didn’t come into common use on the internet until the 1990s.

OMG this bookstore is having a huge sale! Let’s hope there’s also a bookshelf sale…

OTOH: On the other hand

This phrase is used to compare the two sides of an argument.

It’s midnight, I’m tired, and I should probably go to bed. OTOH I have unlimited popcorn and three more seasons of Game of Thrones to watch!

OMW: On my way

This acronym is typically used when responding to something especially funny—so funny that “LOL” and “LMAO” are not enough to convey how hilarious you think it is.

My friend just asked when the “Winds of Winter” release date is. ROFL

I’d love to get together for a game night! I’ll check the calendar with my SO and get back to you.

TBH: To be honest

This phrase is used to indicate that you’re expressing your true opinion.

I am not a fan of jello. It’s way too wiggly, TBH

Can you send me the link to the event page? THX
THX for bringing donuts for our team!

TMI: Too much information

Usually used when someone reveals information that is shocking or unpleasant in some way.

I just learned how hotdogs are made. TMI

TTYL: Talk to you later

Similar variations include “TTYT” (“talk to you tomorrow”) and “TTFN (“ta-ta for now”).

YOLO: You only live once

Life is short, so why not live it up? Seize the day. Step outside of your comfort zone. Take risks. Do what’s exciting, silly, fun, or even a little dangerous.

Splurged on tickets and am heading to Comic-Con! YOLO
Ordering the extra extra spicy wings against my better judgement. YOLO
Your writing, at its best.
Works on all your favorite websites