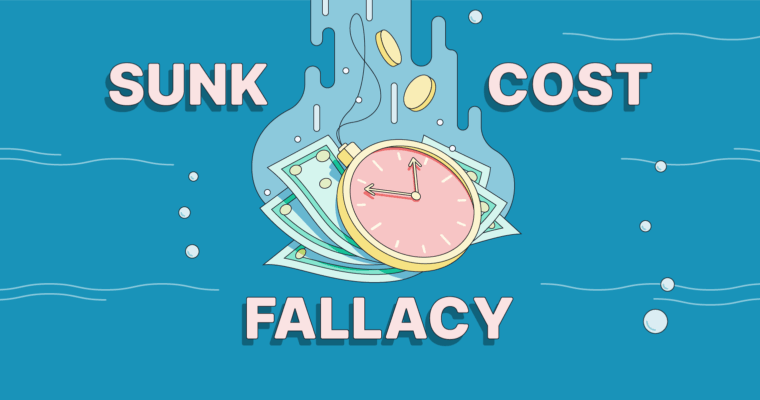 You decided to write a book, and five years later you’re still writing it. The topic that once interested you no longer does, and it’s a struggle to get yourself to sit down at your desk and start typing. But you’re two hundred pages in and have dedicated hundreds of hours to researching and writing your novel.

At this point, you’re considering abandoning the project. But something stops you—that nagging reminder that you already put so much time and effort into the work. If you don’t finish it, you think you’ll have wasted all of that energy.

That nagging reminder has a name: the sunk cost fallacy.

What is the sunk cost fallacy?

The sunk cost fallacy is a logical fallacy that entails sticking with a losing or failed venture because you’ve already invested a significant amount of time, money, or other resources that you can’t get back. It hinges on the idea that because you’ve already incurred costs, you need to stick with the endeavor in order to “get your money’s worth.”

If you’re familiar with the phrase “cut your losses,” that’s a call to avoid getting trapped by the sunk cost fallacy.

The sunk cost fallacy is unique among other logical fallacies in that it isn’t primarily a rhetorical strategy. You might run into the red herring and straw man fallacies in debates and discourse, and you might even run into the sunk cost fallacy there too. But it’s used far more frequently as a way for an individual to justify illogical choices to themselves. Take a look at these examples:

In the first example, sticking with medical school means this person will accrue two years’ worth of additional student debt and spend two years preparing for a career they don’t plan on actually pursuing. These are two years the individual could otherwise spend exploring other career options. On the flip side, sticking with medical school also means eventually graduating with an MD and, during that time, potentially finding a medical specialty that fits their career goals and needs.

So if the time they’ve spent in medical school is a sunk cost, does that mean they should stick with pursuing the degree? Ultimately, the answer depends on how they can realistically expect to benefit from doing so—and the answer to that isn’t always black and white. This is what can make identifying (and overcoming) the sunk cost fallacy challenging.

How does the sunk cost fallacy work?

Everyone falls prey to the sunk cost fallacy at some point. There are a few reasons for this. One is most people’s tendency toward risk aversion—even if something isn’t going how they’d hoped it would, it can feel safer to stick with something familiar, where they know the risks, than try something unknown that can potentially come with bigger risks. This is related to loss aversion, people’s tendency to prioritize avoiding losses over seeking gains. A loss’s impact feels more significant than a gain’s impact, and this factors into people’s decision-making when they’re facing a potential loss versus a potential gain.

Another reason is commitment bias. Commitment bias is the human tendency to stick with previous behaviors and beliefs. The sunk cost fallacy can prevent an individual or organization from acting in their own best interest.

What effects can the sunk cost fallacy have?

As we mentioned above, the sunk cost fallacy can cause an individual to act against their own best interest. It does this by clouding their judgment and making it difficult to see whether continuing with a venture is worth the additional investment it requires. Going back to our medical school example, choosing to stay in the program would mean potentially doubling one’s student debt to complete coursework they aren’t genuinely passionate about.

On a larger scale, the sunk cost fallacy can drive a company to stick with an underwhelming product or prevent them from keeping up with modern consumer demands or workplace trends. For example, a company might spend millions on a brand-new, state-of-the-art retail store, then lose market share to competitors that offer ecommerce. The sunk cost fallacy might keep the company from offering ecommerce as a way to try and force consumers into the store.

How to avoid the sunk cost fallacy

You can avoid the sunk cost fallacy by logically thinking through all of the actions you’re considering. Making a pros/cons list can help you do this. It can also be helpful to be deliberate with your word choice and avoid emotionally charged words like investment, loss, and value. Keep language concrete so you can see all the expenses associated with your decision for what they truly are.

List out all the costs you’ll incur with each course of action you’re considering. Forget about what you’ve already spent (and this includes time and effort spent). The resources you’ve already spent are gone; this is true regardless of the choice you make. To avoid the sunk cost fallacy, consider only what you have to lose and gain moving forward with each option. This gives you a clearer look at your options and will help you make a more rational choice.

The sunk cost fallacy can play out in a variety of ways. Sometimes, the consequence is expensive. In other scenarios, it can be dangerous. And in others, the only consequence is boredom.

Here’s one example of a fairly low-stakes sunk cost situation: sticking with a boring book because you feel obligated to finish it. Imagine you borrowed a book from the library, and about two chapters in, you realize you just aren’t enjoying the story. The sunk cost fallacy might drive you to finish the book anyway because you invested time in reading those first two chapters.

Here’s an example with higher stakes: the Concorde fallacy. In 1956, the British and French governments invested in the development of a new supersonic airplane, the Concorde. Initially, the estimated cost to develop the Concorde was about $100 million. However, as the project continued, it became more and more expensive, and despite this, the governments continued paying because they had already made significant investments. The Concorde never became a profitable project, and the aircraft was retired after fewer than thirty years.

The sunk cost fallacy plays out in a variety of scenarios. Think about this last example: A family purchases a new home. About a year into living there, one spouse receives an amazing job offer in another state. Despite being able to sell the home for a small amount more than they paid for it, the couple decides to remain in the home and pass on the job. In this case, the sunk cost is more than the cost of the home—the couple could sell the house at a profit. But their investment in months of house hunting, upfront purchase costs, and time spent preparing the home and moving made the new opportunity look less attractive.

What is sunk cost fallacy?

The sunk cost fallacy is the human tendency to stick with endeavors in which we’ve already invested time, money, or other resources even when changing course would be the more logical choice.

How does sunk cost fallacy work?

The sunk cost fallacy is persuasive because losses tend to feel more significant than same-size gains. For example, losing $50 generally feels like a bigger deal to your finances than gaining $50 does.

Choosing to finish a boring movie because you already paid for the ticket is an example of the sunk cost fallacy. Another example is keeping an incompetent employee on staff rather than replacing them because the company has already invested tens of thousands of dollars training them.

How to avoid the sunk cost fallacy

When you need to make a decision, you can avoid the sunk cost fallacy by considering the costs you’ll incur if you move forward with each option. Don’t think about what you’ve already spent—your investment is in the past, and no matter what you choose to do, it can’t be recovered. Focus on the future.