What Is a Straw Man Argument? Definition and Examples 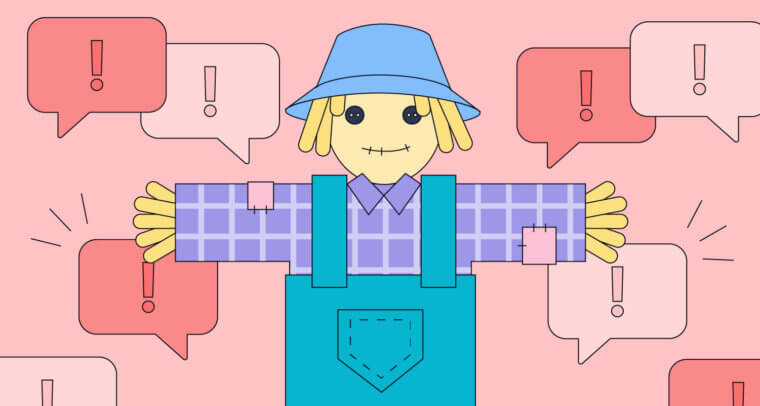 When you make a straw man argument, you’re essentially arguing against an imaginary scarecrow. It’s an easy way to make your argument sound infallible—and that’s what makes it a logical fallacy.

Your writing at its best
Grammarly helps you communicate confidently

What is a straw man argument?

Other common logical fallacies include the following:

History of the straw man fallacy

One of the earliest references to the straw man argument dates to Martin Luther. In his 1520 book On the Babylonian Captivity of the Church, he claimed that one of the church’s criticisms of him was that he argued against serving the Eucharist according to one serving practice despite his never actually making that argument. He described this criticism as “they assert the very things they assail, or they set up a man of straw whom they may attack.”

Later recognition of the straw man fallacy as a distinct logical fallacy dates to the twentieth century. Generally, scholars agree that the term originated with the idea of setting up a simplistic imagined opponent that’s easy to knock down, like a scarecrow or a military training dummy.

How does a straw man argument work?

A straw man argument is constructed by presenting an opposing position as a warped, extreme version of itself. There are a few different ways an individual might turn a reasonable argument into a straw man:

Straw man arguments are used in a few different ways. In a live debate, one might be used in an attempt to back the opposing debater into a corner and force them to defend an extreme or unpopular take on their position. In a piece of writing, a straw man argument makes it easy for the writer to make their position look rational and appealing. By doing this, though, the writer is giving readers a biased look at the issue they’re discussing. When readers aren’t familiar with the topic, this can give them the wrong idea and prevent them from developing well-reasoned opinions on it. And when readers are familiar with the topic, it can make the writer look foolish and cause readers to take their position less seriously.

When and why is the straw man fallacy used?

You’ve probably seen and heard straw man arguments in webcomics, on podcasts, on talk radio, in blog posts, and on television. They often appear in political rhetoric. You might have even used them yourself, even without realizing it.

People use straw man arguments for a variety of reasons. Sometimes, it’s to turn the opponent into a boogeyman that’s easy to rally supporters against. Other times, it’s due to a genuine misunderstanding of an opponent’s position. Keep both of these points in mind when you find yourself having to counter a straw man argument.

The easiest way to identify a straw man argument is to determine whether an argument sounds too simple or extreme to be true. Take a look at these statements:

See how all of these statements contain simple statements that lack nuance? That’s a key characteristic of a straw man argument. In reality, the opponent in the first statement might be focused on his project’s development and prioritizing it over ecological concerns, but that doesn’t mean he hates animals. The principal in the second statement might be making changes at their school, but to say they want to ban everything fun shuts down any opportunity for productive dialogue in the conversation about these changes. And in the third statement, the company being discussed very well might prioritize keeping up their shareholders’ earnings —but it’s highly unlikely that’s their only priority.

How to counter a straw man argument

To counter a straw man version of your position, restate your position in the clearest, most definitive language possible. The clearer you are, the more difficult it is for your opponent to distort your works or take them out of context. This works as a straw man prevention strategy as well as a straw man rebuttal strategy.

When you’re actively being misrepresented by a straw man, stay calm and try to avoid straw-manning your opponent in return or letting your argument devolve into other fallacies, like the tu quoque fallacy (wherein you accuse your opponent of the same wrongdoing you yourself are accused of). Regardless of what you’re responding to, using fallacies in your discourse only undermines your position. Here are more effective ways to counter a straw man argument:

Countering straw man arguments isn’t the only skill you need to develop to protect your work from being undermined this way. You also need to know how to recognize them in your own writing. When you’re writing an argumentative or persuasive essay, it can be easy to use straw man arguments—even accidentally!

Before representing an opposing argument in your writing, be sure you understand it accurately. One way you can test this is by imagining you hold the opposing point of view and writing out a well-articulated argument from that position. If possible, ask somebody who holds that opposing position if your understanding of it is accurate.

No matter how strongly you oppose another position, understanding it accurately is important for a few reasons:

Check for straw man arguments (and other logical fallacies) when you read through your first draft. Revising them could mean going back and doing more research on the issue you’re discussing—so make sure you give yourself adequate time for additional research before you start working on your assignment.

Person 1: Because of the thefts in our building, I think we should add more security cameras.

Person 2: So you’re saying you don’t trust your neighbors?

Person 1: I think we should mute debaters’ microphones when it’s their opponents’ turns to speak so they can’t interrupt each other.

Person 2: I disagree because I support free speech.

Person 1: Our restaurant’s policy is that nobody under eighteen is admitted after 8 p.m.

Person 2: Why are you against families eating dinner together?

Person 1: We welcome guests of all ages before 8 p.m., but at night, we maintain an adults-only atmosphere.

Person 2: Your restaurant discriminates against families with kids.

What is a straw man argument?

A straw man argument is the logical fallacy of distorting an opposing position into an extreme version of itself and then arguing against that extreme version.

How does it work?

A straw man argument is constructed by presenting an opposing position as a warped, extreme version of itself. By doing this, the arguer attempts to make their opponent look ridiculous and/or make their own position seem like the only rational option.

What are some examples of a straw man argument?

Person 1: Because of the thefts in our building, I think we should add more security cameras.

Person 2: So you’re saying you don’t trust your neighbors?

My opponent hates animals and doesn’t care how many will be displaced by his project.

All vegans are opposed to animal captivity, including pet ownership.