Is It Time to Phase Out Latin Abbreviations? 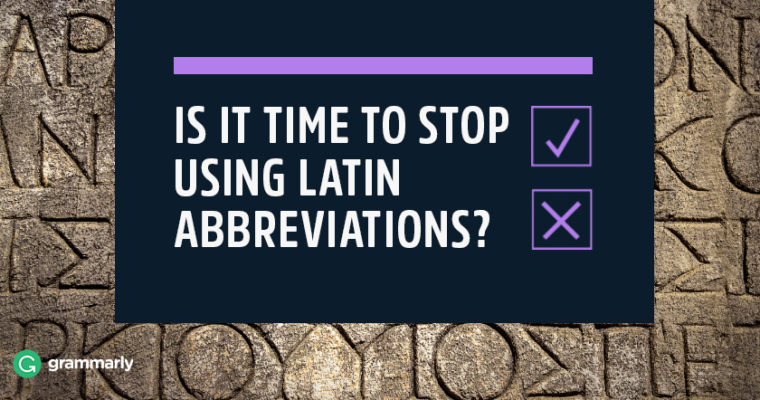 If you are writing in English, why would you use Latin abbreviations? Should these abbreviations be phased out of English writing once and for all? The government of the United Kingdom is asking these questions, but not for the reason you might imagine.

Why the UK Is Dropping Latin Abbreviations

Would you find it amusing if you went to a government website and found the word “egg” interspersed throughout the text? Why all the eggs? It seems that text-to-speech software that reads web pages aloud for the visually impaired have trouble with some Latin abbreviations. The software makes its best guess about how to read the abbreviations, and in the case of “e.g.,” the guess is “egg.” As the Guardian reports, “Clearly, in these turbulent times, it is important work to stop blind people sniggering at official documents. . .” The visually impaired visitors sometimes chuckle, but the government thinks it’s no laughing matter. They will be replacing Latin abbreviations with English equivalents.

Which abbreviations are in danger of elimination? The notorious e.g., etc., and i.e. E.g. usually introduces a list of examples. The English equivalent would be “for example” or “such as.” Et cetera (etc.) means “and the rest.” You use it when you are not listing all of the possible examples. Finally, i.e. clarifies a statement. In Latin, it literally means “it is.” Here are some examples of the abbreviations in use:

Some of the quadrennial swing states (e.g. Ohio, Florida, Pennsylvania) remain close.
RealClearPolitics.com
Use a water/fire proof box or safe to store important documents (titles, passports, birth certificates, etc.) and valuables (jewelry, cash, precious metals, etc.).
CBSNews.com
How many lives have been ruined by this need to “explain,” which usually implies that the explanation be “understood,” i.e., approved.
Erich Fromm, The Art of Being

Should the US Stop Using Latin Abbreviations?

Should the United States follow suit? Would eliminating Latin abbreviations be good for us? Some people argue that it would, because there seems to be confusion on how to use them correctly. In 1946, George Orwell published “Politics and the English Language.” In it he gives six rules to improve writing—to “[cut] out all stale or mixed images, all prefabricated phrases, needless repetitions, and humbug and vagueness generally.” One of the rules is to never use a foreign phrase, a scientific word, or a jargon word if you can think of an everyday English equivalent. Why not substitute “that is” for i.e., “such as” for e.g., and “and so on” for etc.? Well, even though Orwell encourages writers to minimize foreign words, he admits in the same essay that e.g., etc., and i.e. are “useful.” After all, they do shorten a text, clear up vagueness, and help avoid repetition. Instead of taking Latin phrases out of texts, could developers improve web page reading technology?