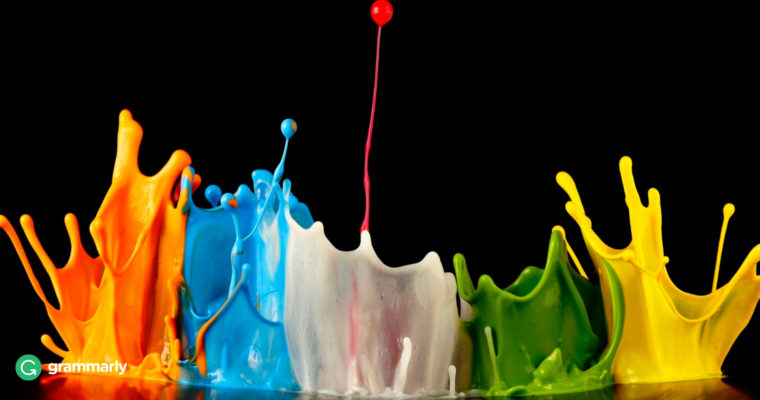 To spatter means to scatter small particles of a substance. A spatter is the pattern of drops that result from spattering.

To splatter means to scatter large particles of a substance. A splatter is the pattern of drops that result from splattering. Are you a precise person? If so, you will want to know the difference between spatter and splatter. These two words look almost the same, but they differ in a couple of interesting ways. Would you like to learn more?

Spatter has been around since the 1600s. It is likely derived from two related words—spatterje and bespatten. Spatterje, which means to send drops of liquid flying in different directions, is Frisian, a Germanic language. Bespatten, a Middle Dutch word, means “to splash.” In English, you can see the influence of both terms in how spatter is used. As a verb, it means to scatter small particles of liquid. As a noun, it refers to the splash or spot that results from something being spattered. News reporters use the word liberally, often to describe blood, oil, or some other substance found at the scene of an accident. However, spatter appears in literature too. As in the first example, it usually refers to a liquid. In the second example, the author uses it to refer to an immaterial object.

I have no doubt at all the Devil grins, As seas of ink I spatter. Ye gods, forgive my “literary” sins— The other kind don’t matter. —Robert W. Service, Rhymes of a Rolling Stone

She felt, as she felt so often with Murphy, spattered with words that went dead as soon as they sounded; each word obliterated, before it had time to make sense, by the word that came next; so that in the end she did not know what had been said. It was like difficult music heard for the first time. —Samuel Beckett, Murphy

Splatter, on the other hand, reputedly comes from blending spatter and splash. Just like spatter, the verb refers to the action of something scattering or falling in drops. The noun refers to the spot made by the thing splattered. Many people tend to think of a spatter as a smaller patch of liquid than a splatter. Here are some examples of splatter:

The Gross-out: the sight of a severed head tumbling down a flight of stairs, it’s when the lights go out and something green and slimy splatters against your arm. —Stephen King

We all have our little solipsistic delusions, ghastly intuitions of utter singularity: that we are the only one in the house who ever fills the ice-cube tray . . . that only we hear the whiny pathos in a dog’s yawn, the timeless sigh in the opening of the hermetically-sealed jar, the splattered laugh in the frying egg, the minor-D lament in the vacuum’s scream . . . ” —David Foster Wallace, Infinite Jest

Many people use the words spatter and splatter interchangeably. If you’d like to be precise, use spatter for small particles of liquid. Reserve the use of splatter for large messes. However, there’s no need to get out the tape measure! After all, one dictionary defines splatter as “to spatter.” How will you use these two look-alikes?