Slang to Standard: How Casual Language Can Become Acceptable

Grammarly
Updated on May 19, 2022Lifestyle 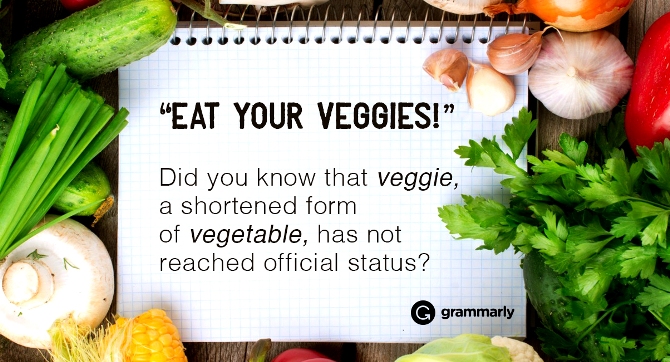 A popular teenager has a cute girlfriend named Regina. One day, a student expresses his desire for a cute girlfriend: “I want a Regina!” The expression catches on. It becomes common for boys to refer to their love interests as “Reginas.” The original couple graduates, but students at the school continue to use the term. In time, no one remembers why girlfriends are called reginas.

This fictional account illustrates how slang evolves. High schools are indeed fertile breeding grounds for colloquial speech, but slang can crop up anywhere. Let’s follow the true journeys of some of the most fascinating slang terms.

What would we do without the words breakfast, lunch, and dinner? A morning meal of eggs, toast, and orange juice; a midday sandwich, apple, and a bag of chips; an evening plate of salad and a filet of fish—each word evokes a certain time of day and set of foods. It’s not surprising, then, that special expressions developed to reflect deviations from the normal schedules or menus. Brunch, a combination of breakfast and lunch foods, is eaten in late morning or in early afternoon. A snack is a small portion of food eaten between mealtimes. Many synonyms for snack appeared over the years—a quick bite, a nibble, nunchion, rear-banquet. The last two examples didn’t survive. In sixteenth- and seventeenth-century London, nunchion was a snack between meals and a rear-banquet was a late-night snack. Europeans rarely, if ever, use these terms now. It seems they preferred their tea time!

The 1920s were a particularly rich decade for slang in the United States. Many expressions are still in use today. For instance, a wet blanket is a person who is no fun or who ruins the good times of others. Chin music, a punch on the jaw, is still used in baseball to refer to a pitch that passes very close to the batter’s face. Other expressions, though not commonly used, may at least sound familiar. It’s the bee’s knees, for example, means it’s the best. In the 1920s, to take someone for a ride meant to lure them into your car and drive off with the intent to murder! But the modern-day meaning of the idiom is less nefarious than the previous definition. It means to dupe someone, usually with a clever lie. The unfortunate majority of 1920s slang disappeared completely. Can you guess what flappers meant when they referred to orphan paper or bangtails? Bangtails are racehorses. Orphan paper is a bad check. With so many interesting terms, just imagine what conversations were like in the 1920s!

Nowadays, hussy is an offensive term for a woman who is considered immoral or ill-behaved. You might be surprised to learn that hussy was not always such a negative expression. In the 1520s, hussy simply meant housewife. Bully is another word that has shifted in meaning over the years. In the sixteenth century, it was a positive term for a loved one or brother. In the 1860s, the idiomatic phrase bully for you was used to praise someone for a courageous act. In modern times, bully refers to a person who threatens or harasses others, an act distinctly lacking in courage.

The phrase for free is also considered informal, though its many alternatives (without charge, gratis, at no additional cost) are standard English. You might have heard your mother encourage you to “Eat your veggies!” Did you know that veggie, a shortened form of vegetable, has not reached official status? If you look in a dictionary, you will likely see “informal” after the word veggie. How long does it take for a frequently used colloquialism to become a bonafide word? Bones, another name for dice, dates back to the fourteenth-century writings of Chaucer but is still considered a slang term. Crestfallen, on the other hand, comes from sixteenth-century cockfighting slang and is now perfectly acceptable. The fate of individual slang words is hard to predict.

Much of modern slang evolves from social media. Some expressions explode into existence, spread rapidly, and die out just as fast. The overuse of the expression YOLO (You Only Live Once) earned widespread disdain just months after its initial popularity. Following the historical trend, other expressions evolve to encompass wider or different meanings. Ride, which used to mean car, now includes anything that gets a person from point A to point B, whether it’s a bike, motorcycle, or even a pair of designer shoes. Still, other terms may survive far into the future.

Your school, place of employment, and even your Facebook page represent an opportunity to influence the English language. What special words do you use to communicate with your family and friends? You never know what will happen to the slang you speak today. Will it die out? Or will it evolve into the formal speech of the next generation?