Is Shakespeare the Father of the English Language? 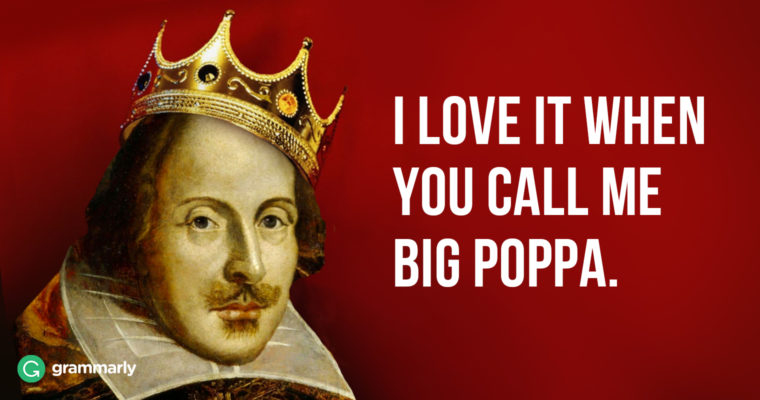 Is Shakespeare the father of the English language? Some people say he is because he coined so many new words. However, National Geographic cautions “It is almost impossible [to] say with absolutely certainty when a word or phrase was first used—or even whom to credit for creating it. In Shakespeare’s case, many of the words and phrases attributed to him merely debuted in their modern permutations in his writings and can actually be traced back to older forms. Other words and turns of phrase are indeed ‘original,’ insomuch as they are documented in the written record only as far back as Shakespeare.” Other expressions are “faux Shakespeare” phrases that, according to the evidence, did not originate with Shakespeare. Let’s look at some of Shakespeare’s most significant contributions to English as well as a couple of phrases that he definitely didn’t coin.

Arouse, which means to wake up or stir to action, appears in Henry VI, Part 2 and Hamlet. Before these two plays, the form of the word in common usage was rouse.

If he is not the father of English, perhaps he could be called the father of onomatopoeia. Onomatopoeia is the making of a word from a sound. Shakespeare did it a lot. Here’s one of his most sound-filled passages from The Tempest:

Eaten out of house and home

In Henry IV, Part 2, which was published in 1600, Mistress Quickly says, “He hath eaten me out of house and home; he hath put all my substance into that fat belly of his: but I will have some of it out again, or I will ride thee o’ nights like the mare.” According to The Phrase Finder, this expression first appeared in Thomas Cooper’s Thesaurus Linguae Romanae Britannicae almost twenty years earlier. By the way, the definition there was “to waste and consume his substance, money etc.”

Knurled was a common word that meant bumpy in Shakespeare’s day. He didn’t content himself with the norm in Measure for Measure. Instead he altered the phrase, giving us the familiar adjective that we use today—gnarled.

In The Merry Wives of Windsor, one character says: “Pray you let us not be laughing-stocks to other men’s humours; I desire you in friendship, and I will one way or other make you amends.” Though people often attribute this expression to Shakespeare, the book Brush Up Your Shakespeare informs us that he didn’t actually invent the phrase. Shakespeare wrote his play at the end of the sixteenth century and published it in 1602. At least two other references date back to 1533, one in An Other Boke Against Rastel by John Frith and another in An Apologie for Poetrie by Sir Philip Sidney. No one argues, however, that Shakespeare didn’t contribute to the expression’s popularity.

In both Love’s Labour’s Lost, one of Shakespeare’s earliest comedies, and A Midsummer Night’s Dream, Shakespeare uses the word manager. It’s the first time the word was used as a noun.

Strange bedfellows are unlikely companions—people you wouldn’t expect to associate with one another. Because there is no earlier recorded use of this phrase, Shakespeare receives credit for inventing it in this line from The Tempest: “Misery acquaints a man with strange bedfellows.” In modern times, people often apply the idea to politicians who form unexpected alliances when they say, “Politics makes strange bedfellows.”

Sweets to the Sweet

Not all of Shakespeare’s sayings retained their original sense. For example, when a husband presents his wife with a box of chocolates, he might charmingly say this cute phrase. However, in Hamlet, it’s a queen who gives sweets to the sweet. The sweets are a funeral bouquet that she presents to Ophelia, who has drowned.

Shakespeare invented and popularized more words than you will find in this article. Why not list them all? There are some 1,700 of them! According to Shakespeare-Online.com, he boldly changed nouns into verbs and verbs into adjectives. He combined words that had never been joined together before. He added new prefixes and suffixes. He even made up some words entirely. Is that enough to earn him the designation “father of the English language?” You be the judge. If you need more evidence, check out this list of words that were coined or popularized by Shakespeare.