What Is Rhetoric, and Why Is It Important? 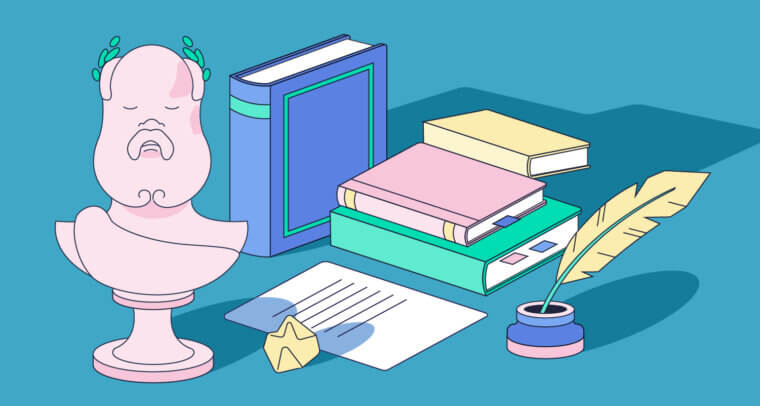 Whenever you write a persuasive essay, talking points for a debate, or an argumentative essay, you use rhetoric. Even if you aren’t familiar with the term, you’ve used rhetoric to support the points you make in your writing. Rhetoric is the language you use to communicate your writing’s core message.

Write confidently
Grammarly helps you communicate the way you intend

Rhetoric is language that’s carefully constructed to persuade, motivate, or inform the reader or listener about the speaker or writer’s position. You might have heard the term used in discussions about politicians and political goals. That’s because politicians, alongside people in other roles that involve public speaking, employ rhetoric regularly. In fact, the word “rhetoric” comes from the Greek “rhetorikos,” which means “oratory.”

Why is rhetoric important?

Rhetoric is important because it provides a framework for critical thinking. It demonstrates your thought processes as a writer and speaker. By doing this, it illustrates your arguments’ strengths.

To understand rhetoric, you need to understand the concept of heuristics. A heuristic is a practical approach to problem-solving or self-discovery. When you make an educated guess about something or use trial and error to reach a conclusion, you’ve used a heuristic. With heuristics, you don’t necessarily have to reach a precise answer; the goal is to reach an approximate or otherwise “good enough” solution.

Here’s a quick example of a heuristic in action: You throw a holiday party every December. Despite inviting about twenty people to the party, an average of six or seven people show up each year. This year, you’ve invited twenty people again, but while planning for the party, you decide to order food for a group of ten. You know, from experience, that all twenty people likely won’t show up. But to err on the side of caution, you order slightly more food than you anticipate needing, so you’ve got enough in case this year has a higher-than-average turnout (and leftovers if it doesn’t).

Heuristics play a key role in rhetoric because speakers and writers often use them to illustrate the points they’re making. You might write a persuasive essay about the value an overnight campus shuttle service would provide by calculating its approximate cost and discussing the benefits it would provide in contrast to the percentage of the campus’ operating budget it would require. In this example, your rough monetary calculations and their value compared to the shuttle’s intangible benefits are heuristics.

A brief history of rhetoric

Rhetoric is one of the three ancient arts of discourse, also known as the trivium, alongside logic and grammar. Discourse is the formal exchange of ideas in conversation, typically in an orderly way characterized by all speakers taking time to express their positions, opinions, and data on a given subject.

The trivium, along with the quadrivium, make up the seven liberal arts. These are the academic disciplines taught in medieval European universities, defined as the core of a well-rounded education by scholars of the era. But the trivium as the basis of a standard education dates back further than that, to Plato’s time. Plato explained these three areas in detail in his dialogues.

Aristotle called rhetoric “a combination of the science of logic and of the ethical branch of politics” and defined it as “the faculty of observing in any given case the available means of persuasion.” From Ancient Greece thousands of years ago to today, rhetoric has been the backbone of persuasive and motivational speaking.

In his writing on rhetoric, Aristotle defined the three distinct modes of persuasion that we still recognize and use:

Logos is language crafted to appeal to logic and reasoning. When you appeal to logos in an argument, you support your position with facts and data. Here is an example of an argument that appeals to logos:

Ethos is language whose credibility comes from its speaker’s reputation or authority. This authority can come from their credentials, like a doctor discussing the most effective means of preventing pathogen transmission, or from their position within a narrative or situation, like a car accident witness describing the collision they saw. In your writing, you might appeal to ethos like this:

Pathos is language that creates an emotional connection with the reader or listener. Pathos attempts to persuade, motivate, or inform the audience by making them empathize with the speaker. Here is an example of pathos:

The rhetorical triangle is the graphical representation of the three modes of discourse as an equilateral triangle. By showing all three concepts as equally spaced-apart points, it demonstrates their equal importance to effective communication. This doesn’t mean every piece of effective communication uses all three—pathos has no place in a lab report, for example—but that all three are equally effective when used appropriately.

Rhetoric in types of writing like narrative writing and poetry often relies on linguistic tools like figurative language and well-known figures of speech. These tools are known as rhetorical devices. Through a rhetorical device, you can make your argument feel more pressing, make it stick in listeners’ and/or readers’ minds, enable them to empathize with you or your characters, and drive them to think differently about the issue you’re presenting.

There are lots of different rhetorical devices you can employ in your writing. Here are a few common ones:

Hyperbole is an extreme exaggeration meant to highlight the issue presented:

“I deal with thousands of angry customers every day.”

With hyperbole, both the speaker and the listener know it’s an exaggeration. The goal is to demonstrate how an issue compares to the norm or to other issues by positioning it as wildly outside the norm.

The reverse of hyperbole, meiosis emphasizes how far outside the norm an issue is through extreme understatement:

“Compared to others in the area, our school was empty.”

Epistrophe is the repetition of a word through successive phrases, clauses, or sentences for the purpose of emphasizing it as a concept. Typically, parallelism is employed to underscore this repetition and give the speech a poetic quality. Abraham Lincoln used epistrophe in this famous excerpt from the Gettysburg Address:

Metaphor is a type of figurative language that compares two topics by claiming that one literally is the other:

“My mother’s cooking is heaven on earth.”

Chiasmus is the repetition of a sentence with the word order switched around. Perhaps the most famous example of chiasmus comes from President John F. Kennedy:

As we mentioned above, the kind of rhetoric a writer uses largely depends on the type of writing they’re doing. While a student writing an argumentative essay or another kind of academic writing relies on logos to communicate their work’s message, poetry is pure pathos.

You’ve encountered rhetoric in a variety of media. If you’ve ever seen one of those SPCA commercials set to the song “Angel” by Sarah McLachlan, you’ve had rhetoric tug at your heartstrings.

Here are a few more examples of rhetoric in action:

“I am assured by a very knowing American of my acquaintance in London; that a young healthy child, well nursed, is, at a year old, a most delicious, nourishing, and wholesome food; whether stewed, roasted, baked or boiled, and I make no doubt, that it will equally serve in a fricassee, or ragout.” —Jonathan Swift

Rhetoric is language used to motivate, inspire, inform, or persuade readers and/or listeners. Often, rhetoric uses figures of speech and other literary devices, which are known as rhetorical devices when used in this manner.

What is an example of rhetoric?

What are some rhetorical devices?

When your writing is strong, your rhetoric is stronger

Even if your arguments are impenetrable, you’ll have a hard time persuading your readers of anything if your writing is full of grammatical and punctuation mistakes. When it’s time to revise, Grammarly catches mistakes you might have missed and suggests ways to make your writing stronger.