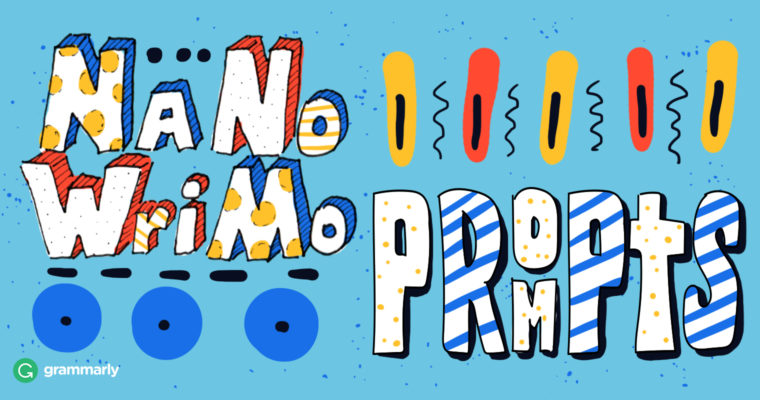 November 15 isn’t one of the predicted dates for the apocalypse, but some writers get weak in the knees at the mention of it. It’s the halfway point of NaNoWriMo, or National Novel Writing Month. Aspiring authors from around the world commit to write an entire book during November. Come November 15, writers attempting to complete their 50,000-word novel for NaNoWriMo are starting to feel the pressure, especially if they seem far away from their goal. Is this the case for you? Don’t lose momentum in the middle of the month. While you don’t want your writing to be cliche, some popular sayings can help you get your groove back.

Writing Prompts for Everyone

Throw the first punch. To knock out writer’s block before it has a chance to set in, try some preventive exercises. In his book Write Great Fiction: Revision and Self-Editing, James Scott Bell suggests practicing a free association exercise before every writing session. Set a timer for five minutes and write anything that comes to mind. It doesn’t have to be connected to your story, or connected to anything for that matter. The objective is to put your brain in a creative mode.

Every cloud has a silver lining. Think about an unpleasant aspect of life—a fight, an illness, an accident, a phobia—and write about the positive effect of it. Might your character gain an insight, learn empathy, or develop endurance that serves them at a future time? You can probably think of a positive side to anything except mange and ringworm; both of those things are just gross.

A little goes a long way. Instead of starting with a full-blown scenario, use a snippet of dialogue or a description to build a scene. Below are five short phrases to get you started.

A Writing Prompt for Science Fiction

If this world doesn’t have enough to offer, you might want to look into alternative dimensions, planets, and realities. If you want to awaken your sluggish creativity, write a new spin on one of the science fiction prompts from MandyWallace.com every day for a week. Here’s your prompt for today:

Everyone on Earth falls asleep at the same time, except one man. What adventures does he have?

If how to begin your novel is a bigger conundrum than a mystery plot, you might turn to real life for inspiration. Read the newspaper and pay attention to the details. For example, if you found an article reporting a robbery, ask yourself: Why were the robbers successful or unsuccessful? Why were they interested in the item they stole? What clues did the thieves leave? Before you know it, you will have the basis for a real whodunnit.

Love is blind, but you need vision to write about it. Go to the park, the supermarket, or any public place. Watch people. Pick someone with whom you could never see yourself having a relationship. Or is there someone who you think would never consider you as a love interest? Now write the story! How could you fall in love with each other?

The middle of November doesn’t have to be scary. If you use these writing prompts to give your novel a boost forward, it might even be exciting. Share your word count and what your most effective writing prompts are in the comments below.