Preventative and Preventive: What’s the Difference?

Shundalyn Allen
Updated on
May 21, 2019Grammar 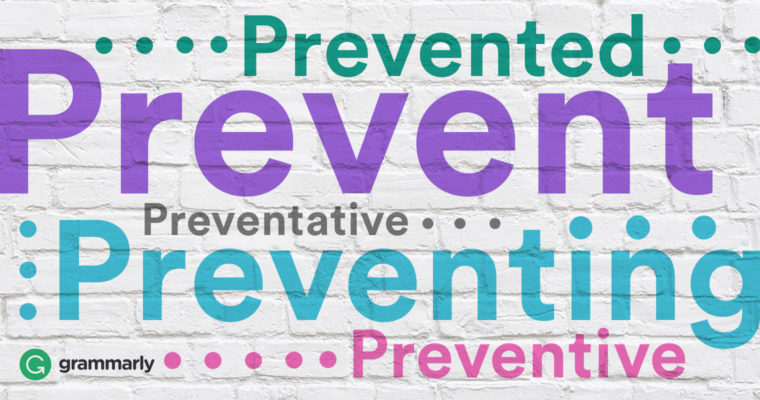 According to Language Monitor, English has over one million words. Many of them are maddeningly similar-looking! Take for instance preventative and preventive. What is the difference?

How to Use Preventive and Preventative

Let’s look at some sentences. Based on context, how would you define preventive and preventative?

An innovative program that serves low-income and uninsured children in Los Angeles, the UCLA–First 5 LA 21st Century Dental Homes Project, has more than tripled preventive dental visits for children from birth to age 5, according to a new policy brief by the UCLA Center for Health Policy Research. ―UCLA

For example, a voluntary federal jobs program for the unemployed could be established now to provide individuals and families with as-needed job assurance at a base (living) wage . . . This is a genuine preventative policy. It stops unemployment from mushrooming while maintaining tight full employment over the long run. ―NYTimes.com

The Definition of Preventive

First, let’s start with preventive. It means “helping to prevent or hinder.” As in the example above, it often refers to medicine—drugs, vaccines, procedures, etc.—that inhibits disease. If you use it as a noun, it refers to something that prevents something bad from happening.

The Definition of Preventative

Preventative means “helping to prevent or hinder.” Though it often refers to medicine, you can also use it to talk about other things that you try to stop from happening. And in noun form, it refers to something that hinders or inhibits. No, you are not experiencing déjà vu. Dictionary.com gives the same definition for both preventive and preventative. Merriam-Webster.com places a direct link to preventive instead of a separate definition for preventative. The words mean the same thing.

The Etymology of Preventive and Preventative

Around 1635, someone had the idea of adding the -ive suffix to the verb prevent. Around the same time, preventative evolved as a variant spelling. According to Google Ngram Viewer, preventive is and has always been the more popular choice.

As usual, there is a difference between American and British English. Preventative is only a little less common than preventive for the Brits, whereas Americans rarely use it. What do the style guides say? WritingExplained.org reports: “The New York Times prefers preventive, as does the AP Stylebook, The Chicago Manual of Style, and Garner’s Usage Guide.”

Preventative is a valid alternative spelling of preventive. However, some experts and style guides favor preventive. Here’s some advice from the editor of Merriam-Webster’s Learning Dictionary: “Be aware that you may encounter writers, editors, and grammarians who believe that preventive is better, older, and more correct than preventative. None of this is true, but if you want to avoid any conflict, use preventive.” Now, you must choose which one you prefer. Will you take the path of least resistance and use preventive? Or will you embrace all the freedom that English’s million-plus word lexicon offers and help launch preventative as the new favorite?