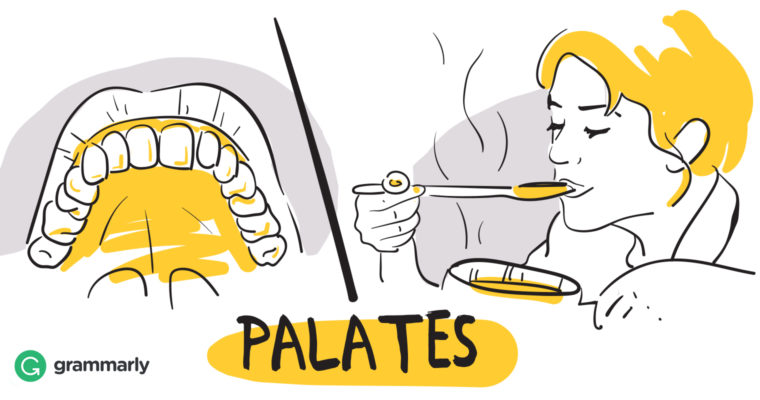 Proverbs, sayings, and phrases that advise people to respect the tastes of others can be found in many languages. In English, we have “to each his own,” “every man to his taste,” “one man’s meat is another man’s poison.” Besides advising us that tastes vary from one person to another, these proverbs also remind us of the futility of discussing something that’s simply a matter of taste. But that’s not what we’ve set out to do here, discuss taste. We will, however, discuss a word that can, in some senses, be used as a synonym for taste—palate.

What is the definition of palate?

Before we get to the tastier meaning of the word, let’s talk about another palate, which all mammals have—the one in our mouths. Our mouths have roofs—the hard bony thing that separates our oral cavities from our nasal cavities. That’s called the hard palate. We also have a soft palate, further down toward our throats. So whether it’s the hard one or the soft one, a palate is the roof of your mouth. Palatum, the Latin word from which palate is derived, had the exact same meaning.

But the Latin palatum also meant taste, and so does palate. Once upon a time, people believed that the sense of taste was located in the roof of the mouth. Today we know that our sense of taste is far more complex and has to do with the taste buds on the tongue and in the nasal cavity, but that didn’t stop the word palate from becoming synonymous with the word taste.

Palate as the synonym for taste can be used for both the physical sense of taste and the intellectual or aesthetic liking of something.

Palate vs. palette vs. pallet

There are two words that look very similar to palate. In fact, these two words are pronounced the same—[pal-it]. That makes them homophones, and homophones can sometimes lead to confusion.

One of the homophones in question is palette, which is a thin board painters use to create and mix colors when painting.

The other word is pallet, which is the wooden platform upon which goods are placed for storage or moving. So remember—the word that refers to the roof of your mouth has no double consonants. One P, one L, and one T.

Examples of the word palate

Two snaggle-toothed dogs have beaten the odds to become viral internet stars after showing off their cleft palates.

An NHS accountant has suggested on Twitter that he is in favour of closing cleftpalate surgery at NHS Lothian.

Yet, the freshness of the ingredients, the bursts of masala—the medley of chilli, cardamom and cumin- and slow-cooked stews will linger, always linger in the palate.

The Indian palate is now dominated by food flavours and taste enhancers, according to latest market reports.