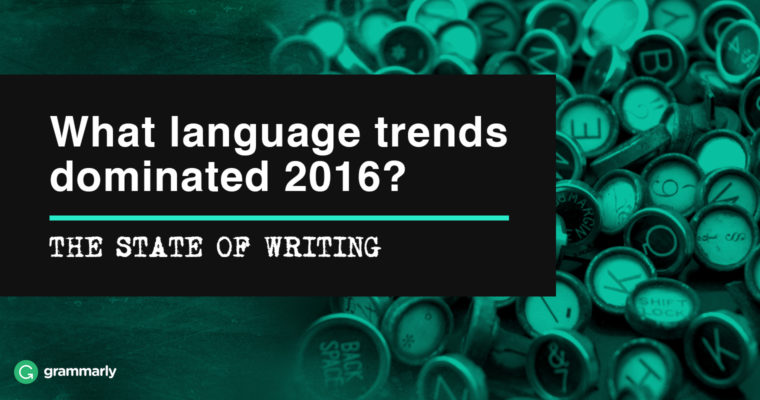 Like an unkeyboardinated tween, you can count on language for boundless creativity – and a seeming randomness that’s hard to keep up with.

We’re constantly adding new words and devising new forms and quirky mashups of old ones. But whether you’re squishing two existing words together to create a new one, or perhaps repurposing a familiar pronoun to be more inclusive, many of the ways we tinker with language follow a few well-worn patterns. Here are some that should be on your radar in 2017.

Portmanteaus occur when two words are fused into a new invention that includes sounds and meanings from both. Perhaps the most obvious example in 2016 was Brexit – shorthand for the vote by the British to exit the European Union. Other common examples likely to hold your attention include:

Other examples abound from recent years, from bromance to frenemies. A few less obvious ones we rather like include:

But while portmanteaus are a near endless source of fun new words, the concept is hardly new. For instance, the word “brunch,” that most savory of examples, was coined more than a century ago.

The very term “portmanteau” dates back as far as 1871, to Lewis Carroll’s Through the Looking Glass. At the time, the word referred to a suitcase with two sections. As Humpty Dumpty explained the matter to Alice, “You see it’s like a portmanteau—there are two meanings packed up into one word.”

While portmanteaus aren’t exactly a fresh innovation, some have argued the ever-growing churn of words and ideas on the web, combined with social-media users’ ceaseless hunger for new ways to express their thoughts, may be accelerating the drive to craft new expressions.

Another way we tend to develop new words is by taking existing nouns or adjectives and repurposing them as verbs. For instance, where a circle of professional contacts was once a “network” (a noun), now developing such connections is itself a verb: “networking.”

One current example stems from doing the basic work of being a grown-up, like paying one’s bills, making a nice home-cooked dinner, and packing the leftovers to take to the office for lunch. This, as the dag-blasted millennials now coming of age might say, is “adulting.” (By contrast, the basic pastime of leaning against walls and talking trash outside suburban movie theaters and diners might be deemed “teenaging.”)

As with portmanteaus, verbing isn’t new: that “verbing weirds language” has been a joke for decades. That said, it’s worth noting an apparent uptick in the number of companies being verbed. Here are some examples:

(That last one is fake; kudos for paying attention.)

For businesses looking to build their brand, being verbed is desireable. It’s almost as if to say, “This company is so ubiquitous, it’s its own class of activity.” Your humble servants at Grammarly, by contrast, would be satisfied with becoming a mere adverb, as in, “You’d do well to get that report edited Grammarly before handing it in.”

A-whole-’nother way to coin a new word is to jam a different word into the middle of it. This is tmesis (pronounced with an optional tuh, then MEE-sis). Think of it as the turducken of the build-your-own-vocabulary buffet.

Tmesis works well for combining colorful language with superlatives, as in “That is ri-gosh-darn-diculous,” or, “I’m fan-freaking-tastic, and yourself?” Be creative, but not too creative.

Some words just aren’t what they used to be, since language has a nasty tendency of refusing to stand still or behave as it’s told.

As an example, “literally” was once an antonym for “figuratively.” It meant something was not just a poetic turn of phrase, but actually the case in real life. But literally fell into frequent use as a term of emphasis in sentences like this: “The budget the governor inherited was a trainwreck – literally.”

This is not to say anyone was bequeathed a smoldering mess of twisted steel and debris; rather, the word literally came to mean just its opposite. The curmudgeons among us may grouse, but recent dictionaries have come to reflect this reality.

The singular “they,” as we’ve noted, is coming into vogue because it’s sometimes handy to use an all-inclusive pronoun in place of “he” or “her,” particularly when a person’s gender is unknown or irrelevant. While this usage may seem emblematic of present attitudes on gender, it’s worth noting that examples date back centuries, to the likes of Shakespeare and Chaucer.

As with the singular “they” above, the honorific Mx. (pronounced Mix) can be useful, especially when you’d like a gender-neutral alternative to Mr., Ms., Mrs., etc.

While according to Oxford Dictionaries Mx. dates back to 1977, of late the New York Times has said the term is quite ready to mainstream [another noun verbed ✓]. Still, the drive toward inclusive language is a worthy one – so you might not want to miss out.