Grammarly IRL: How Melody Wright Turned Her Debt Into Opportunity 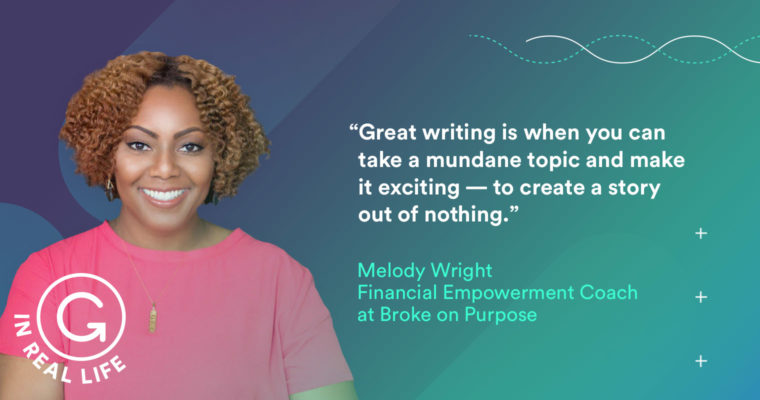 We’ve all spent a little more than we want to now and then, but in 2015, Melody Wright realized she was in over $200 thousand in debt.

Because she’s a blogger, she started sharing her experience with debt through a new blog she titled Broke on Purpose. At the time, she already had a beauty blog that she’d monetized, called Being Melody. She also had a bit of money she made through her PhD. The new challenge she set for herself was to put her money — all of it — toward paying off her debt as fast as possible. If an activity required money and wasn’t going to reduce her debt, she wasn’t doing it. “No,” she’d tell her friends who asked her to hang out, “I’m broke.” Not literally broke — she was broke on purpose.

Between her beauty blog and Broke on Purpose, Wright writes a lot. She writes to express herself, to document her journey, and most importantly, to help others.

Melody Wright is multitalented. She has a PhD in microbiology, she’s a beauty guru, and three years ago, she decided to become a savings expert focused on paying off her debt.

When she was preparing to graduate from her PhD program, she realized that she was about to lose her graduate school stipend. Upon reviewing her finances, she discovered that she and her husband could soon find themselves underwater. Together, they had $212 thousand in debt.

She first began writing about paying off her debt on her personal blog, Being Melody. She wrote about her new rule: refusing to spend money by thinking of herself as broke.

“In the first month, I paid off $2,500 in debt. I continued writing about it to a point where Broke on Purpose started to have its own identity,” Wright says. Eventually, she created her second blog, Broke on Purpose, to chronicle her efforts. Within three years, she managed to pay off over $100,000 of their debt.

It took hard work and a lot of sacrifice to pay off that much money in three years. “It was hard for me to wrap my head around the fact that I’m taking all that extra money and giving it away when I could have put a down payment on a nice house, bought a nice car, and other things. But I’m at a point where I can breathe. Paying off so much of that debt is so liberating.”

Reaching Those Who Need It

“No one ever talked to me about finances — about savings, retirement, or investments,” says Wright. Through Broke on Purpose, she wants to reach those like her, who may have money problems they don’t know how to solve.

“When I read an interesting comment on Instagram, I try to reach out to that person and dig into what they’re struggling with,” says Wright. By listening and engaging with her readers, she gets inspiration for what to blog about. “There are tons of people talking about finances, but I want to figure out what we aren’t talking about.”

As someone who’s working through debt herself, she feels it’s important to put her knowledge out there.

“I feel like I would be doing people a disservice if I just paid off a big chunk of my debt and said goodbye. I just feel it’s a calling of mine that I need to fulfill,” says Wright.

For her, the real reward comes after hitting “Publish.”

“I love it when someone emails me about how much debt they paid off or how my writing has helped them and their partner have an important conversation about debt,” she says. “No matter the amount someone pays off, I get so proud of them.”

“At first, I wasn’t really a writer, to be honest. I started off as a makeup artist, and I wanted to make a blog to talk about it,” says Wright.

Her sister introduced her to Grammarly in 2015, and through practice and technology, she’s become a much more confident writer.

“I’m focused on the things I’m writing about, and Grammarly steps in to say ‘this looks great, but here’s how we can make it look better.’”

But she doesn’t lean on it. In fact, it’s become a teacher as well as an editor.

“My writing has gotten so much better because now I catch something before Grammarly catches it,” she says.

She writes Broke on Purpose knowing that her subject matter can be dry.

“I want people to think that I’m down to earth, funny, and that I get it,” she says. Through her voice, she tries to spice up her writing about finances and live up to her idea of great writing.

“Great writing is when you can take a mundane topic and make it exciting — to create a story out of nothing.”

How Nicholas Barrett Uses Grammarly to Share His Perspective