Latin Abbreviations Every Professional Should Know 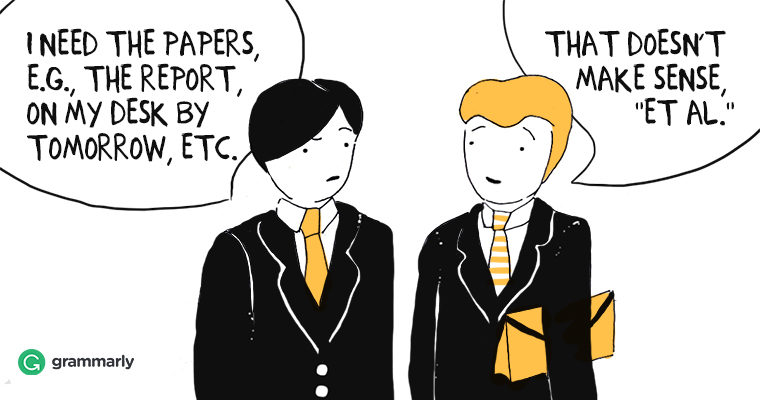 There’s a little bit of Latin in almost every European language. In Romance languages like French, Spanish, Italian, and Romanian, the presence of Latin is unsurprising because those languages developed from it. Germanic and Slavonic languages adopted words and even some grammar from the old lingua franca. In English, there are a few Latin terms that are so common we almost always abbreviate them, sometimes without even knowing what they mean. This can lead to mistakes, which can range from funny to embarrassing or even damaging, especially if they happen in professional situations. For that reason, let’s brush up on the Latin abbreviations every professional should know.

E.g. – Exempli gratia – For the sake of example (For example)

“E.g.” is very commonly confused with “i.e.” It is an abbreviation of “exempli gratia,” which translates literally into English as “for the sake of example,” but is commonly used instead of “for example.” Obviously, we use it when we want to give an incomplete list of examples for something we previously talked about. Not when we want to clarify or explain.

“Etc.,” which is short for “et cetera,” translates into English as “and the rest,” or “and so on.” That is exactly how we use it, to indicate that a list we’ve given isn’t complete and has other members which we haven’t included. “Etc.” is always written with a period after it, even when it’s found in the middle of a sentence. In that case, however, the period is usually followed by a comma.

Re – In re – In the matter of (Concerning, regarding)

“Re” is not an actual abbreviation for “in re.” Its full form stands for “in the matter of,” and as such it is usually seen at the top of legal documents. The short form, in which the “in” is dropped, is the “re:” we use when we respond to emails.

M.O. – Modus operandi – Method of operating (The usual way of doing something)

You’ve probably heard this Latin abbreviation in plenty of crime TV shows. M.O., the abbreviation of “modus operandi,” means “method of operating” and we use it in that sense. Although the term is most popular because of its use in criminology, methods of operating are not limited to criminals, nor is the use of the abbreviation “M.O.”

“P.a.,” the abbreviation for the Latin phrase “per annum,” is most often used in financial contexts to refer to something that happens each year. So if we were to say that a business has a profit of $10 million p.a., for example, we would be saying that its profit per year is $10 million.

A.m. and p.m. – Ante meridiem and post meridiem – Before noon and after noon

We all know what a.m. and p.m. stand for—the former refers to the time of day between midnight and noon, and the latter to the time of day between noon and midnight. The Latin abbreviations for “ante meridiem” and “post meridiem” are used when referring to time in a twelve-hour format instead of a twenty-four-hour format. While their use is pretty straightforward, the correct way of writing these abbreviations is not. Depending on the style guide, it can be a.m. and p.m., AM and PM, or am and pm.