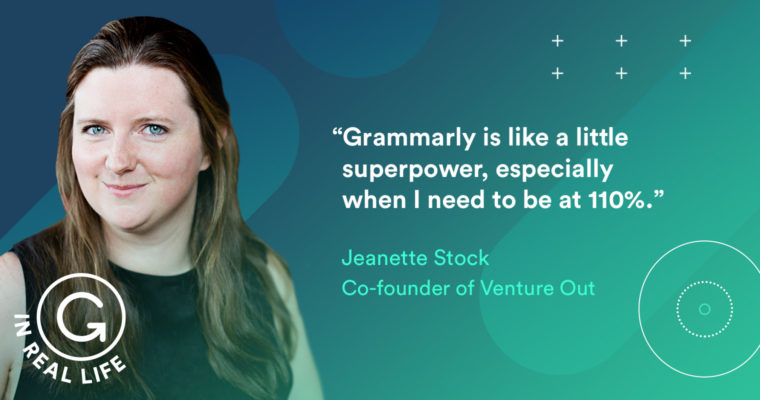 Grammarly wouldn’t exist without our users. That’s why we’re starting an ongoing series to highlight users who do great things with communication — with Grammarly by their side.

This month, as part of #writeproud, we’re highlighting Jeanette Stock, founder of Venture Out.

“Grammarly allows me to get those communications out and feel confident that I’m putting my best foot forward. Grammarly is like a little superpower, especially when I need to be at 110%.”

In 2016, Jeanette Stock started Venture Out: Canada’s first conference for LGBTQIA+ students and young professionals interested in careers in tech and entrepreneurship. What started on the back of a napkin in 2016 has grown into a 1,500-person community supported by volunteers from Canada’s tech industry. Jeanette and her team’s goal is to build an LGBTQIA+ tech and entrepreneurship community and create a more diverse and inclusive future.

Jeanette loves hearing people’s stories, and it has been a guiding passion in her career. She was quick to quote a Canadian author Thomas King: “The truth about stories is that is all we are.”

In university, she switched from human biology to an English major, wanting to learn more about people than what’s inside of them. After university, Jeanette worked for a nonprofit that grew from six to 13 people. She then joined Pressly, a content SaaS product, and developed their marketing and customer storytelling initiatives. Today, she works at Highline, a corporate innovation consultancy looking to help companies build innovative teams. But she wanted to find, or create if necessary, a community of folks like her. Venture Out was born.

As a queer woman in Canada’s tech scene, Jeanette had a hard time finding role models like her. It wasn’t until she attended a LGBTQIA+ tech conference in New York that Jeanette began to discover a variety of LGBTQIA+ people who created cornerstone technologies — like Alan Turing, often known as the father of modern computing, and Sophie Wilson, creator of the ARM processor that 95% of smartphones are built around today. Both of these prolific innovators faced incredible barriers because of their identity.

Jeanette wanted to build a supportive community in Canada like the one she saw in New York — to elevate and celebrate stories from LGBTQIA+ tech innovators that inspire and encourage other people in the community.

“We’re at a moment in history where stories are more acceptable than ever before. We’re trying to encourage more LGBTQ people to look at tech as a career path. It’s going to take a while for the community to change. I want to help build confidence that companies that will accept people from the community are there, and that they will help those career paths.” 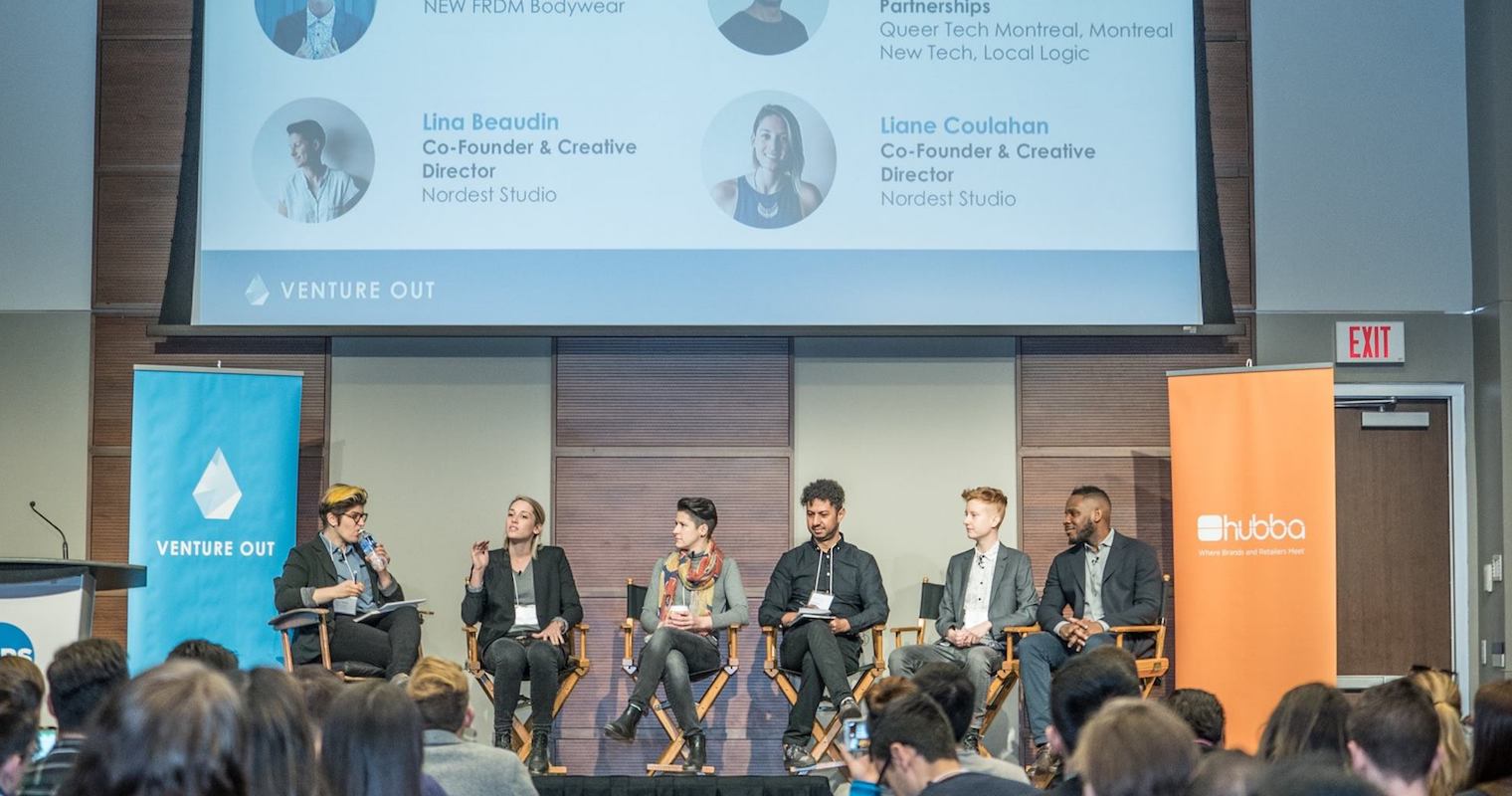 Making Venture Out a reality

When first starting Venture Out, Jeanette was already working a full-time tech job, which meant a 50-60 hour work week. Creating this new community and launching the event meant putting in an additional 20 hours per week. Jeanette worked with 13 other volunteers, all of whom had similar busy tech jobs. Jeanette often wrote sponsorship proposals, coordinated with speakers and companies, and developed marketing materials on the go.

“My work like Venture Out is done just in time. It’s the nature of events, starting something new, and having a volunteer team.”

Although Jeanette is a confident writer, she only had so many hours in the day. This is where Grammarly comes in.

“Grammarly allows me to get those communications out and feel confident that I’m putting my best foot forward. Grammarly is like a little superpower, especially when I need to be at 110%.”

In 2017, Venture Out hosted its second conference, with over 500 attendees, 30 speakers, and 30 sponsors, including big names like Hubba, Kik, Fundserv, CapitalOne, the City of Toronto, Facebook, and TWG.

“When I graduated, I wasn’t out yet. I didn’t have role models. I only knew two or three other LGBTQ people and no one that was my age.”

It was hard to know what her career could look like. That’s been flipped on its head, with the help of Venture Out. What started as an idea has grown bigger than Jeanette and the team that started it.

“I’ve gotten to meet people who have really impacted the tech community and Canada as a whole who are out. It’s shown me what being out and successful looks like and that the two aren’t mutually exclusive.”

Since then, Jeanette’s ambition has evolved. Now, she’s focused on ensuring that Venture Out can sustain itself without her. The stories she’s heard have shown what successful careers for LGBTQIA+ people in tech can look like and how she can be a role model for others like her.

“The biggest compliment I can get is when someone says they can hear my voice in what I’ve written. I like to write the way I speak which is pretty informal. Don’t be afraid to share what makes you different or interesting—whether it’s your writing style, perspective, or personality. If you are able, safe, and comfortable with sharing, it can create connections that you wouldn’t otherwise have. We often miss this today because we are moving so fast.”

Jeanette also admires writers who err on the side of simplicity—stripping out the things that don’t matter. “It helps people get where they are going faster.”

“I was taking a very heavy literature class in university around genocide and the clashes of culture. After weeks of heavy material, my professor began to read a story about a fox farting and creating the world. When he was done, the professor asked: ‘What was the point of that story?’ The students and I began to analyze the story when the professor cut us off and said, ‘I just wanted you to laugh and not forget there is joy in writing and writing for the sake of fun.’

There are opportunities to make someone smile, laugh, or make something a little more interesting. It’s as simple as sending GIFs or bad jokes in an email or document. It’s important to infuse fun and joy in the stuff that we do for eight to 10 hours a day.”

CompanySupporting Nonprofits and NGOs with a Tailored Offering Through 2022

CompanyWrite Confidently on the Go with Grammarly for Samsung Keyboard

CompanyAnnouncing Grammarly for Developers: A Big Step Forward in the Future of Communication

CompanyGrammarly Among Industry Leaders On 2021 Forbes Cloud 100 List
Writing, grammar, and communication tips for your inbox.