4 Things to Avoid When Talking About Mental Health 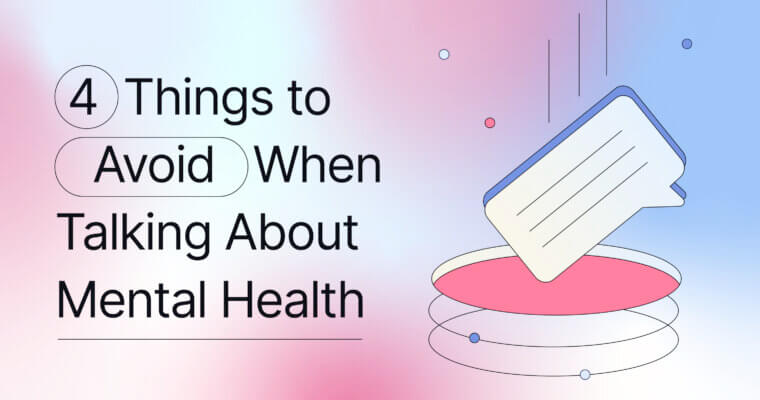 Due to a history of widespread stigma surrounding mental illnesses, insensitive language has reared its head in the ways we talk about mental health, both intentionally and unintentionally. For a lot of people who have experienced mental health issues, this type of speech can feel hurtful and demeaning.

That makes it even more important to try to avoid this kind of language.

“Paying attention to how we talk about mental health can mean the difference between someone feeling affirmed, seen, and heard versus someone feeling dismissed, shamed, punished, and diminished to nothing more than a psychiatric diagnosis or condition,” says Dr. Monica Lyn Thompson, licensed clinical psychologist and founder and clinical director of the mental-health network Therapy for Queer People of Color.

Here are some examples of insensitive language surrounding mental health you should take care to avoid:

The stigma around mental health is so baked into the collective consciousness that insensitive language can easily seep into everyday conversation. There are many terms that could be given a second thought, such as the word “crazy,” which is used so often as a modifier that its meaning, in context, can differ from its original one and therefore be unintentionally hurtful. Similarly, words like “manic,” “insane,” “lunatic,” and “psycho” can depict mental health issues in a negative light.

Another common instance of insensitive language is using diagnoses as exaggerated descriptors. Casually using expressions such as “She had an OCD moment” or “I have PTSD” can unintentionally undermine the experiences of people who do experience these mental health conditions. Likewise, “He’s such a narcissist” or “She’s been acting bipolar lately” neglect to take into account what these mental health conditions actually entail. Nonchalantly saying “I’m so depressed after watching that movie” presents a very different meaning than “I am going through a bout of depression,” and can come off as lacking tact.

“I think there are times of course when people are trying to be malicious, but a lot of times, they’re not. It’s colloquial, it’s what’s on a T-shirt or in a TV show,” notes licensed marriage and family therapist Whitney Goodman. But using these phrases in this context, she adds, shames those who actually have these conditions, so it’s important to steer away from using them in your vernacular.

>>Read More: How to Express Support for People’s Mental Health

Be mindful of toxic positivity

When mental health comes up, sometimes the initial desire is to minimize it by saying that it’s just a matter of changing your outlook. But saying something like “you just need to be more positive,” “look on the bright side,” or “everything happens for a reason” could be harmful as it puts forth an idea that mental illnesses are the fault of those who have them. It’s also unhelpful, overly simplistic advice: Illnesses like these can’t be wished away.

These phrases “can be very dismissive of the broad range of normal human emotion that everyone experiences,” says Thompson. Regardless of whom you’re talking to, it’s a good idea to skip these phrases.

Calling people by their diagnosis—for example, “the bipolar” or “the schizophrenic”—is insensitive because it ignores every other aspect of a person. It implies that the diagnosis is the only thing about them that matters and that they’ll never move past it because it’s all they are.

And if that weren’t enough, referring to people in this way doesn’t even make grammatical sense, as Goodman aptly points out.

“Instead, work on shifting language in a way that identifies the whole person first,” says Thompson. So, for example, you’d say ‘person with schizophrenia’ rather than “the schizophrenic,” or “person with bipolar disorder” instead of “the bipolar.”

In the same vein, words like “victim” and “patient” can be harmful, too, says Dr. Patrick Corrigan, distinguished professor of psychology at the Illinois Institute of Technology. Again, this phrasing is reductive and therefore should be avoided. That’s especially true because, as he points out, recovery is more a rule than the exception.

You don’t have to go back very far in the news cycle to find examples of people recontextualizing violence as the product of mental illness. When mass shootings happen, for example, the conversation quickly shifts from what has happened and who was impacted, to why a person may have done it. Oftentimes, that means speculating about a person’s mental health.

“It’s a natural human reaction. When these horrible things happen, we try to make sense of why, if nothing else, so we can change things, so it won’t happen again,” says Corrigan. But, he adds, mental illnesses are not synonymous with dangerousness. Compounding matters, this approach cements the idea that a person who has a mental illness should be treated as a threat.

Statistically, people with mental illnesses are no more likely to be violent than the general population. In fact, they are ten times more likely to experience a violent crime than someone who doesn’t have a mental health issue.

Avoiding this dangerous link, says Corrigan, “is the biggest way we decrease stigma.”