Discrete vs. Discreet: What’s the Difference?

Homophones are nothing but trouble. They often top the lists of commonly confused words and spelling mistakes. There’s no way of knowing what they mean unless you hear them in context or see them in writing. But even when you see them in writing, many homophone pairs are spelled so similarly that you might not know which is which. “Discreet” and “discrete” is one of these pairs. 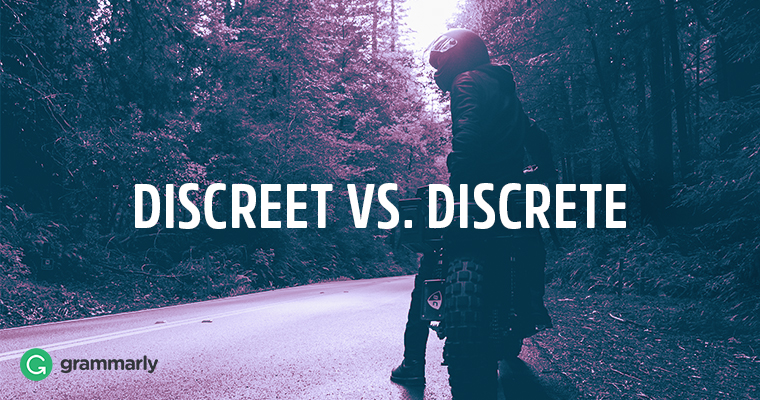 Discreet and Discrete: What’s the Difference?

“Discreet” has the better-known meaning: inconspicuous, proper, private, or unnoticeable. If you were a person who handles problems (especially potentially embarrassing problems) without calling attention to them, you might be considered a discreet person. You can also be discreet about your accomplishments, which would mean that you’re not boastful.

“Discrete,” on the other hand, means separate. If you’re into computers, you might be aware of the difference between discrete graphics cards and integrated ones. Techwalla.com describes a discrete graphics card as a “separate, or discrete, graphics processing unit (GPU) and separate graphics memory.” Sometimes, you can directly substitute the word “discrete” for the word “separate.” For example, if you have to put together a piece of furniture that comes in five separate parts, you could say that the five parts are discrete.

You can use the adjective “discreet” in several ways:

To describe a person with proper conduct, especially with regard to speaking:

To describe a person or a thing that’s not obstructive or easily noticeable:

The Wearable Alcohol Biosensor Challenge was launched by the NIH division as part of its commitment to look for a non-invasive, discreet wearable technology not only for use by the authorities, but also for individuals. —Science World Report

Service is attentive without being intrusive, in keeping with the overall air of discreet, understated elegance in the whole establishment. —Director Magazine

The adverb form of “discreet” is “discreetly:”

No one has asked to recreate any of the receptions in Four Weddings and a Funeral but it could probably be discreetly arranged. —Radio Times

To act with discretion is to avoid causing offense or revealing sensitive information. “Discreetness” is also an acceptable noun form, but it’s less common than “discretion”:

Owners have designed their business around the idea that people will be willing to pay $250 a month to eat, drink and conduct business in a place that promises discreetness in an era when every moment is documented by somebody via cellphones and social media. —Arkansas Online

The adjective “discrete” can be used to describe

A person or object that is not connected with something; a part of something that is individual and separate:

If you’re a casual or mainstream gamer, you don’t need a discrete graphics card, Intel says. Instead, look at integrated graphics, which are getting more powerful by the day, said Gregory Bryant, vice president and general manager of Intel’s desktop clients platform. —PC World

In mathematics, having a finite number of elements: There are two types of variable—discrete and continuous. A discrete variable can only take certain values from a finite set. A continuous variable can take any value. —BBC

The adjective form of discrete is “discretely”:

For the Atrum 2013 and 2014 exploration programs, all coal seams intersected were sampled. Coal plies were sampled discretely on the basis of lithological characteristics and quality. —ABN Newswire

“Discreteness” is the noun form of “discrete:”

Acquiring knowledge almost always serves the public good. Deploying that knowledge is a 50-50 enterprise at best. Recognizing the discreteness of these two elements of science is the surest way to reconcile them. —The Washington Post

You might be annoyed with pair, pare, and pear, but at least discreet and discrete no longer have to annoy you. Discrete means separate, and discreet means “with caution” or “intentionally unobtrusive.” If it is still a little confusing, try to make a mnemonic. For example, the two E’s of discrete are separated by a T, so discrete means separate. What else can you think of to distinguish these two homophones from each other?