Kimberly Joki
Updated on May 20, 2019Grammar 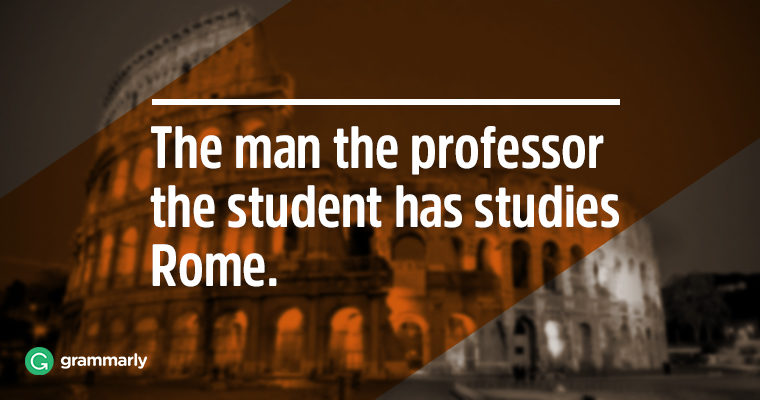 Let’s face it: Sometimes the English language can be downright bizarre. The plural of ox is oxen while the plural of box is boxes, ‘rough’ rhymes with ‘gruff’ even though the two words only have two letters in common, and there are actually more than nine hundred exceptions to the infamous “i before e except after c” rule.

Here’s a tip: Want to make sure your writing always looks great? Grammarly can save you from misspellings, grammatical and punctuation mistakes, and other writing issues on all your favorite websites.
If you’re still not convinced that the English language is full of oddities and conundrums, take a look at these five wacky sentences that are actually grammatically correct.

Well, talk about lexical ambiguity. But as strange as this sentence might sound, it is actually grammatically correct. The sentence relies on a double use of the past perfect. The two instances of “had had” play different grammatical roles in the sentences—the first is a modifier while the second is the main verb of the sentence.

2 One morning I shot an elephant in my pajamas. How he got into my pajamas I’ll never know.

This famous Groucho Marx joke takes advantage of the fact that the same sentence can often be interpreted in more than one way. The first sentence can be read in two distinct ways: A) The man shot an elephant while he was wearing his pajamas or B) The man shot an elephant that was wearing his pajamas. It’s unclear who is wearing the pajamas—the man or the elephant. Most people interpret the sentence the first way and are subsequently startled to read the second part of the joke.

3 The complex houses married and single soldiers and their families.

This is what we call a garden path sentence. Though grammatically correct, the reader’s initial interpretation of the sentence may be nonsensical. In other words, the sentence has taken the reader down a dead-end.

Here, “complex” may be interpreted as an adjective and “houses” may be interpreted as a noun. Readers are immediately confused upon reading that the complex houses “married,” interpreting “married” as the verb. How can houses get married? In actuality, “complex” is the noun, “houses” is the verb, and “married” is the adjective. The sentence is trying to express the following: Single soldiers, as well as married soldiers and their families, reside in the complex.

4 The man the professor the student has studies Rome.

This awkward but grammatically correct sentence is a product of what is known as center embedding. In English, we can typically put one clause inside of another without any problem. We can take “the man studies Rome” and add a bunch of additional information between the noun and the verb. However, the more information that is added, the harder it is to interpret the sentence.

In this particular case, the sentence conveys the following: The student has the professor who knows the man who studies ancient Rome. Each noun corresponds to a verb (the man studies, the student has). But because of the sentence’s syntax, this is hard to decipher. Remember: just because a sentence is grammatically correct doesn’t mean it is acceptable stylistically.

No, your eyes are not playing tricks on you. You read that sentence right—it reads “buffalo” eight times. You see, “buffalo” is a noun that refers to the large, shaggy-maned North American bison, a city in upstate New York, and a verb that means, “to intimidate.” First devised by professor William J. Rapaport in 1972, this notorious sentence plays on reduced relative clauses, different part-of-speech readings of the same word, and center embedding. It’s also a pretty prime example of how homonyms (words that share spelling and pronunciation but have different meanings) can really confuse things.

While it might be hard to parse, the sentence is coherent. If you stare at it long enough the true meaning may even miraculously come to you: “Bison from Buffalo, New York, who are intimidated by other bison in their community, also happen to intimidate other bison in their community.” For further clarification you might also want to check out English indie rock band Alt-J’s song “Buffalo,” which was famously inspired by this conundrum of a sentence and used in the soundtrack of the Oscar-nominated Silver Linings Playbook.

So, in conclusion: English is weird. But in spite of its oddities, it is also a strangely beautiful language. You can do all sorts of crazy things with it without breaking any rules. The bounds of proper English are virtually endless—test them in your writing today!