What Is the Causal Fallacy? Definition and Examples 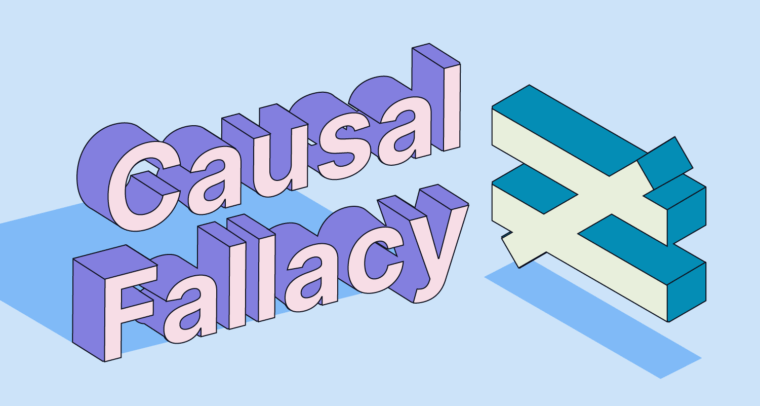 As humans, we naturally want answers to our questions. We want explanations for the situations we find ourselves facing, and we want to be able to understand why those situations worked out the way they did.

But there’s a snag: We aren’t always logical thinkers. And sometimes, in our drive to explain the world around us and the things that happen in that world, we blow past logic in favor of neat, satisfying conclusions. This thought process is called the causal fallacy, which is a type of logical fallacy.

What is the causal fallacy?

Take a look at these examples of the causal fallacy in action:

Logically, none of these can be true. Your outfit on game day has no bearing on your team’s success, and fender benders happen all the time, regardless of a stop for coffee. The fallacy here lies in assuming the relationship between an event and its supposed cause.

When a causal fallacy comes up in discussions, it can mislead listeners. When listeners recognize a causal fallacy, it can also make the speaker look uneducated on their topic or provoke suspicion of them. In other contexts, it can lead to misrepresentations, confusion, and mischaracterizations. What’s more, it can lead to people glossing over and ignoring an issue’s actual cause, which is often more complicated. Causal fallacies often happen in politics when politicians attempt to associate their opponents with negative things, even when this association isn’t accurate.

Causal fallacies in other areas can have similar effects, like blaming an individual for something they had little to do with or pushing people to do things they otherwise wouldn’t. When it’s used this way, the causal fallacy can have effects similar to the slippery slope fallacy.

What are the different types of causal fallacies?

There are a few different types of causal fallacies. While they all hinge on an incorrect view of the relationship between cause and effect, they each present this view uniquely.

You’ve probably heard the phrase “correlation does not imply causation.” When somebody says this, they’re acknowledging this type of causal fallacy and consciously choosing to avoid it.

A correlation is a statistical relationship or connection between two things. When somebody says “correlation doesn’t imply causation,” they’re saying that just because two things appear to be related due to timing, it doesn’t mean either thing is actually influencing the other. A famous example of this is the correlation between shark attacks and ice-cream sales. Buying ice cream doesn’t make an individual more likely to be attacked by a shark, and being attacked by a shark doesn’t make them suddenly crave ice cream. The common denominator here is that both tend to increase in the summer—the shark attacks increase because more people are swimming in the ocean, and the ice-cream sales increase because it’s hot out.

When you notice a correlation and automatically assume there’s causation behind it, you’re making this logical fallacy.

The common factor here is a bookshop, but the new bookshop has nothing to do with the old one. Despite this, the speaker assumes that any place that sells books will overcharge them.

The genetic fallacy can have some overlaps with ad hominem and straw man fallacies. Take a look at how the same subject can be misrepresented through these three fallacies:

Genetic fallacy: Students have gotten injured during fraternity rushes, so in the interest of student safety, it only makes sense to ban fraternities from campus.

Straw man: Fraternities are just groups of partiers who act wild and cause problems, so they should be banned from campus.

Ad hominem: We should ban fraternities from campus because AJ and Dave, two fraternity members, are rude and always late to class.

Fallacy of the single cause

This causal fallacy occurs when a speaker or writer attributes an issue to a single cause instead of acknowledging that it could have many causes. For example, an individual might notice an increase in the number of animals being surrendered to their local shelter. They might assume it’s because their owners adopted them impulsively without understanding how much work goes into pet ownership. However, the reality might be that although some owners are surrendering their animals for this reason, others might be surrendering their animals because increasing expenses are forcing them to move or personal issues have made it impossible to keep their pets.

How to avoid using causal fallacies

Having causal fallacies—and really, any logical fallacies—in your writing can make it appear that you don’t have a strong grasp of your subject. Keep in mind that accidentally making an illogical argument doesn’t make you a bad writer; the best of us might make a red herring or bandwagon argument every now and then. However, knowing how to spot and revise logical fallacies is a big part of being a good writer.

Look for causal fallacies when you read through your first draft. This first round of editing is the stage where you primarily edit your content. As you read your work, take note of the claims you make and match them to your sources. If you find any claims that you can’t back up with primary sources or secondary sources, you might have causal fallacies in your writing. If the claims are paraphrases or direct quotes from your sources, check to see if you’re communicating them accurately in your work. If the claims are conclusions from your own analysis of the sources, make sure you have sufficient evidence in those sources to support your claim. Your original conclusion is your own, but in academic writing, you need to be able to demonstrate the path you took to reach that conclusion.

What is the causal fallacy?

The causal fallacy is the logical fallacy of incorrectly concluding the cause of an event. It comes in many different forms, but in each of these forms, the speaker makes an illogical association between an event and its supposed cause.

What are the different kinds of causal fallacies?

What are some examples of causal fallacies?