Grammarly IRL: How Casandra Lorentson Found Her Voice to Elevate Others 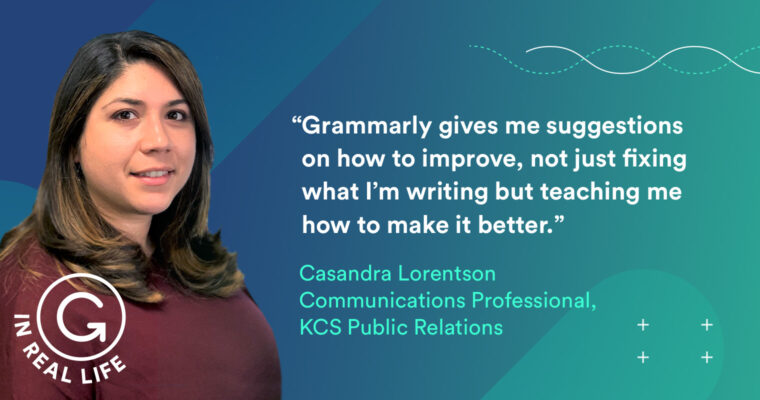 The first thing to know about Casandra Lorentson is that she’s a goal conqueror. Using a process called mind mapping, she plans out what she wants to achieve, then sets up challenges to overcome month by month. So far it’s going pretty well: she was the first person in her family to attend college, graduated in four years, got hired by her alma mater, and now works in strategic public relations. Each one a goal, each one conquered.

But all this self-realization hasn’t been easy. Lorentson’s path from her hometown in San Marcos, Texas, to a thriving communications career in Corpus Christi has required building the skills to feel confident in doing what she loves: raising up other people’s stories.

The science of telling stories

A career in communications wasn’t always Lorentson’s goal. She’d initially come to Texas A&M University-Corpus Christi for an undergraduate degree in biology. After college she turned her love for animals into a career, working with hawks at the Texas State Aquarium and the Peregrine Fund, then for the Padre Island National Seashore to help preserve and protect nesting sea turtles.

After a few years, she started plotting her next goal, wondering how she could best share her love of science with others.

The answer? Going back to school, this time to earn her master’s degree in communications. During her studies, she got her first taste of writing for an audience outside of the science community while interning in the university’s own marketing and communications office. The transition was daunting. “At first, I would do what I was taught in science classes: build my argument up at the top and get to my point down at the bottom,” she recalls. “But then it was flipped on me. My supervisors said, ‘No, you need to tell all the important and exciting stuff in your first paragraph.’”

It was a confidence-shaking experience. “As an intern, I would just sit there and stare at a blank screen,” she says. “How could I put words onto this screen? I had a lot of insecurity about not being a writer.”

But with some good advice from her mentors—“Just put something on the page and then go back and fix it”—she started getting better at putting those words on that screen. And not too long after completing her degree, she was hired full-time to write stories about A&M-Corpus Christi’s science and engineering programs, along with the renowned Harte Research Institute, which studies sustainable use and conservation of the Gulf of Mexico.

The issues were close to her heart. “My whole job was to take these professors’ or students’ research and translate it so that a general audience could be as excited about it as I was—and they were,” she says. “Sometimes I would interview students and I’d think, ‘You’re going to cure cancer.’ Because there were so many smart people with so much passion for the things they’re doing. I’d be amazed, and I just loved telling their stories.”

Good writing is so much more than spelling, grammar, and punctuation. pic.twitter.com/CBLP9XaSmA

Gaining confidence and paying it forward

When she started in her new professional life, Lorentson found that she was responsible not only for writing content but also for that content being grammatically correct and clear to readers.

“I had imposter syndrome,” she says. “But right around then, I heard about Grammarly. I ended up purchasing it for myself, and I noticed that it would catch so many errors and offer so many useful edits. And it wasn’t just that it was offering edits—it was teaching me why.”

In her second year of using the product, she started paying closer attention to the reports she saw in the Grammarly Editor and noticed her readability score kept going up. That was a big topic of discussion in her office: how many people were going to read through an article and finish it. She felt she was improving at making things digestible and understandable, and she remembers thinking, “Grammarly gives me suggestions on how to improve, not just fixing what I’m writing but teaching me how to make it better.” It was a good feeling.

Her writing progress “was like an evolution, starting from learning the basics of grammar, then choosing stronger words—instead of important, picking something else that was more suggestive,” and on and on from there: “learning how to recognize passive voice in sentences that should be active, learning about how your audience is going to read a specific article.”

She even recommended to her interns that they use Grammarly, too, and whenever she saw a Grammarly blog post that seemed relevant, she would forward it along. “It was really cool,” she says. “You could see that they would use the advice instantly in their writing.”

Just like that, Lorentson had gone from staring at a blank page to being a writing mentor herself. She wore the editor mantle well: “I could fix their errors all day, but if they don’t know why the comma needs to go there, they’re never going to get it.”

From how to why

After a few years of feeling confident about her ability to write articles and make them clear, Lorentson wanted to learn more about strategy. Why did organizations tell the stories they tell? So about ten months ago, she began a new phase of her professional life at KCS Public Relations, where the emphasis is on building strong personal connections with clients.

Above all, the agency seeks to build trust. “I use Grammarly in my emails,” she says, “because I’m often working with other communicators who have many years of experience, and I want them to feel confident that I know what I’m doing and they can safely put their projects in our hands.”

Her work now varies wildly from client to client. She might tailor an informal and loose tone in one brief, a formal and straightforward one for a different campaign. From press releases to collateral to one-sheets, she’s doing more writing and editing—with more different people—than ever before.

To ensure anything she touches is the best it can be, she uses her secret weapon. “Recently I was in a situation where we were discussing where to put a comma. Someone wanted it to go behind the and. And I said, ‘No, no, I know this because Grammarly says it’s a conjunction and you’re supposed to put it in front of the and.’ I literally stopped everybody and popped open Grammarly, dropped in the sentence, and we reworked it until Grammarly told me that it was correct. Everybody stood around me, and I said, ‘See, this is why I like it.’”

Lorentson isn’t one to rest on her laurels. While she’s perfecting client messages, she’s also looking ahead to the future. An accreditation in PR is a long-term career goal, and she thinks she might go into falconry one day, maybe after retirement. She’s always got an eye on the road ahead. Luckily, she has company for the journey: her husband, Brian, her two “fur-babies,” a yellow lab named Amber and a pug named Sir Alex Norton.

And they aren’t her only companions. “I think writing and Grammarly are just going to be part of my life going forward,” she says. “Because let me tell you—the comma is just my nemesis, and I always forget it until Grammarly reminds me.”

How Alex Berger Writes His Way Around the World