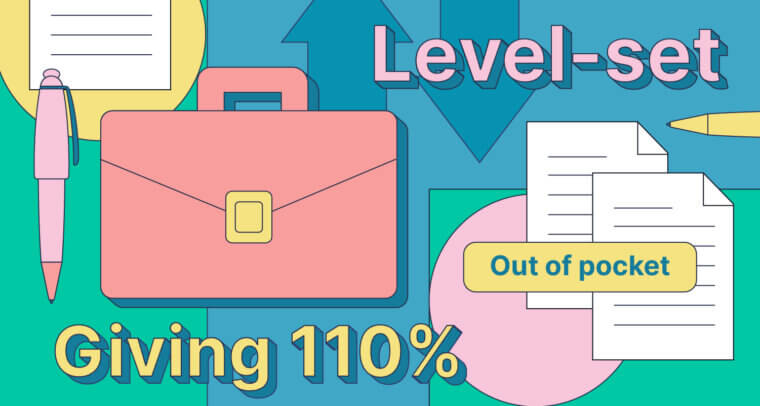 When humans get together in groups, they tend to develop new lexicons specific to the context. Certain Hogwarts wizards complain about “muggles,” high schoolers aspire to “squad goals,” and occasionally a mid-level manager stares fervently into your eyes and tells you there’s an opportunity to “redefine the narrative.”

Indeed, modern business jargon can feel like a tangled mess of lifeless metaphors and stale clichés that confuse more than clarify. But this article is not just for the noble anti-jargon heroes who’ve had enough of “moving the needle,” and “putting ducks in a row.” It’s also for those of us who have cringed inwardly while realizing we’re the ones offering to “circle back.” To be fair, many of us have used more than one (if not all) of these trite business phrases on the regular. We might’ve even unintentionally used them in personal contexts, in spite of our better judgment, because of how habituated we’ve become to them in our day-to-day communication.

So whether you’re a jargon detester or just consider it a bland yet ingrained part of work communication, take a moment to enjoy our list of some of the most common workspeak offenders.

It generally means “to use to a maximum advantage,” but leverage risks giving the impression that the speaker wants to convey more gravitas and business acumen than is necessary. Consider this sentence:

“Leveraging our goodwill with millennials will help us increase sales.”

Now imagine replacing the Jack Donaghy-esque verb at the beginning with plain old “maximizing,” and watch it go from opaque to straightforward.

(Alternatively, if you’re in the market for more opacity rather than clarity, we suggest using the phrase “finding synergies.”)

In a business context, “impact” denotes results or influence. However, it’s used so frequently that its meaning starts to get murky. Someone determined to impact key metrics is bound to have an impact, but if this word appears twice in the same email or slide, we suggest you consult a thesaurus and find another impactful option, lest your audience groan as if their wisdom teeth are impacted.

Are you skipping through an orchard, plucking apples for making pies? Sounds kinda nice! But that’s not what this phrase is even remotely about. Rather, it describes going for the easy win, maybe while the harder stuff gets shoved to the “back burner.” That’s no way to leverage synergy!

This phrase can set off alarm bells when workers don’t interpret it as “going above and beyond” so much as “We’d like you to work fourteen-hour days for the next month for reasons that are arbitrary.” Unless you’re a professional athlete or Little League coach, this phrase probably shouldn’t be a professional mainstay.

This is a particularly curious buzzword, given that learning—not a learning singular or learnings plural—is the more grammatically correct gerund.

“On this next slide, I’ll share my main learnings from the panel discussion.”

You’d be just as on the mark by sharing your insights, takeaways, or, simply put, what you learned instead.

We support you taking some time away from your inbox, but this is a curious way to say “I won’t be available.” Also, if you’re setting an out-of-office message, we have some helpful suggestions.

As in, “Before we get started, I want to level-set everyone’s expectations.” The idea is you’re telling folks roughly how things are about to go, but “level-setting” conjures an image of you turning a dial—perhaps while explaining, “Bad news for those of you who wanted an eight out of this meeting, because you’re getting a five, max.”

This means doing things in a way seen as optimal in a given industry or field:

“We retained an outside consultant to incorporate best practices into the company handbook.”

When possible, it’s best practice to choose wording that sounds, if not more approachable, then at least less fluorescent-lit.

This phrase connotes changing an expectation or parameter of an ongoing project in a way that makes the project more difficult to complete.

“If our client keeps moving the goalposts, we won’t be able to deliver their report on time!”

This is also a great way to cheat at games in your backyard, although, as the nearest younger sibling will undoubtedly point out, “It’s not fair!”

To drill down is to investigate something in detail, synonymous with other trite phrases such as “unpack that” and “peel the onion.” See also:

When used as a verb, you’d think this one is—or at least used to be—meant literally, as in:

“Our podcast listenership is pretty niche, but I was surprised how many people double-clicked our sidebar on Grace Hopper’s pioneering role in programming.”

However, the phrase has awkwardly equated people’s attention with the banal click of a mouse; plus, we can think of plenty of conversational substitutions for the above case, such as “explore,” “discuss further,” or “deep-dive.”

This overused phrase means “to gain popularity or win support.”

“Our newsletter has failed to gain traction; we only have twelve subscribers.”

We’re not sure about gaining traction, but you might broaden your audience by scaling back the biz jargon. Sorry, we said scaling; what we meant to say was, giving 110% to finding more impactful alternatives.

This article was originally written in 2017 by Joanna Cutrara. It’s been updated to include new information.