Shundalyn Allen
Updated on May 20, 2019Grammar 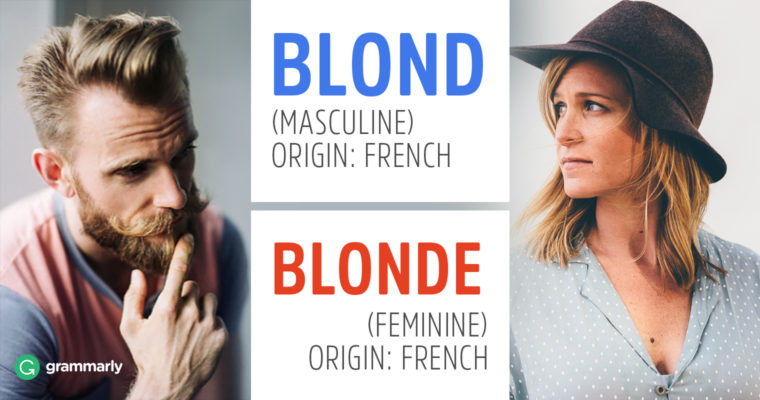 In almost every culture, there are legends about hair. According to ancient Scottish folklore, for example, women could keep their sailor husbands safe at sea by braiding their hair. Loosening their braids could cause a terrible storm on the ocean. In some Native American cultures, warriors attributed a sort of sixth sense to long locks. They felt their tresses helped them to be more alert to danger. The Internet is full of pop psychology articles claiming that hair color influences your personality. Probably the most well-known association is between golden-toned hair and fun. What is that hair color? Blond or blonde?

Though Old English already had the word fair, blond and blonde came to English via French. As English evolved, these terms became more popular than fair to describe light hair color. In French, adjectives can be written in several forms, depending on the gender and number of what is being described. Look at these examples:

Did you notice the four different spellings of the adjective? The French feminine, masculine, and plural endings didn’t catch on for most borrowed terms, but the feminine E of blond survived to present day. When describing males, you would use blond: He is blond. You can add an E to blond when you describe females: She is blonde. This rare persistence of French forms can be confusing for some because English doesn’t usually change the endings of adjectives to reflect gender. Here are two examples of blonde from books. In both cases, you can infer that the subject is a woman.

At first we raced through space, like shadows and light; her rants, my raves; her dark hair, my blonde; black dresses, white. —Francesca Lia Block, Violet & Claire

Eric approached the octagonal nurses’ station, and a blonde nurse looked up from her computer monitor, smiled, and pointed to examining room D. —Lisa Scottoline, Every Fifteen Minutes

In the next two examples, there is no E on blond. Examine the context. Do you agree that the subject being described is a male?

They play in the Meadow. The dancing girl with the dark hair and blue eyes. The boy with blond curls and gray eyes, struggling to keep up with her on his chubby toddler legs. —Suzanne Collins, Mockingjay

What happens if you are describing more than one person? Two flaxen-haired women are blondes, but two golden-haired men are blonds. In the quote below, Alice Munro describes a pair of mixed gender, so she uses blonds (masculine plural).

They are both sly, Hugh and Margaret, they are socially awkward, easily embarrassed . . . Both blond, both easy blushers, both cold mockers.

To add to the confusion, not everyone follows the French pattern for this adjective. Don’t be surprised if you find blond describing a woman or blonde describing a man. Here is an example:

He looked rather pleasantly, like a blonde satan. —Dashiell Hammett, The Maltese Falcon

Not everyone is so happy to use different terms to describe men and women with the same hair color. The American Heritage Book of English Usage warns that referring to a woman as “a blonde” may have sexist undertones. It is common, and not incorrect, to use blond for both males and females. The difference is indistinguishable in spoken English because the E does not change the pronunciation.

In French, inanimate objects have gender. In English, the word blond (and very occasionally, blonde) sometimes describe the color of such objects. Here are three examples:

Birch is essentially a blond wood, difficult for most people to distinguish from maple. —Gerard B. McCabe and James Robert Kennedy, Planning the Modern Public Library Building

There are black flecks of something like mica stuck there too, much smaller than the blond sand grains. —Kim Stanley Robinson, Aurora

One of the most approachable styles, a golden or blonde ale is an easy-drinking beer that is visually appealing and has no particularly dominating malt or hop characteristics. —Craftbeer.com

Do people of a particular hair color really have the most fun? Some people think the legend is true; others swear it’s false. What color is your hair? Whether it’s black, brown, red, or some other hue, you can still have fun! If it’s a shade between golden and light chestnut, you know what to call it. How should you spell it—blond with or without an E? It’s up to you!