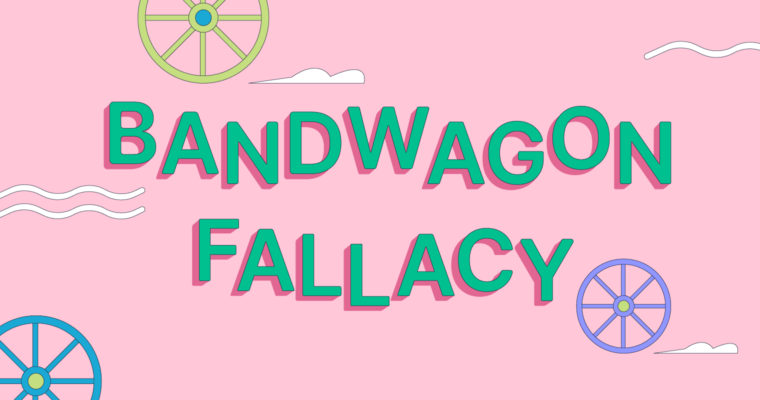 If all your friends read the same book, would you read it too?

Hey, if your answer is “yes,” we get it. Friends are some of the best people to ask for book recommendations because you often have similar interests.

But if you expect to like the book just because they liked it and maybe even find yourself slogging through it despite not caring for it or recommending it to others, there’s a name for what you’re experiencing: the bandwagon fallacy.

What is the bandwagon fallacy?

The bandwagon fallacy, also known as the appeal to the masses or appeal to common belief fallacy, is the logical fallacy of claiming that something is true because everyone believes it. Whether that belief is actually true or not doesn’t matter—if an arguer claims that a position is true because it’s popular, the arguer is using the bandwagon fallacy.

This extends to justifications for specific actions, support for policies, and endorsements. Take a look at these bandwagon fallacy examples:

The bandwagon fallacy gets its name from the nineteenth-century practice of political supporters jumping onto their parties’ bandwagons—literal wagons used to transport musical bands at rallies and parades. A similar phrase, “the bandwagon effect,” refers to individuals joining social movements in response to the movements becoming more mainstream.

The bandwagon fallacy is an informal fallacy, which means that the illogical part of a bandwagon argument is its content, not its construction. In other words, there’s nothing inherently illogical about claiming that something is popular, positive, or effective because it’s enjoyed by many. The fallacy lies in the claim that because something is popular, it must be effective, true, or otherwise positive.

Categorizing it further, the bandwagon fallacy is a fallacy of relevance. That means it’s illogical because the “proof” that something is true—its popularity—has no actual impact on whether it’s true. Other fallacies of relevance include the ad hominem fallacy and the red herring fallacy.

The bandwagon fallacy is often used to justify or normalize a specific position. It can also be used to make a position seem more appealing by exaggerating its popularity.

How does the bandwagon fallacy work?

Essentially, the bandwagon fallacy makes listeners and readers question any opposition they have to the position being discussed. Human beings have a drive to conform to group behaviors. In fact, the Solomon Asch conformity experiment found that this drive is so strong that people will actually choose incorrect answers to simple questions after watching others make the same incorrect choices.

This is also the principle that drives us to succumb to peer pressure. It makes decision-making easier by eliminating the need to think critically about the topic at hand. Your brain sees other people doing something and goes, Hey, everybody else is doing it—that many people can’t be wrong, can they?

This isn’t the only way the bandwagon fallacy works. It can also provoke FOMO, or the fear of missing out, in readers and listeners. When it’s employed in advertising, it often pushes consumers to buy a product this way. Here’s a quick bandwagon fallacy example meant to create FOMO:

And sometimes, all it does is spread misinformation. Remember, a belief’s popularity doesn’t make it true. Think about how Galileo’s work supporting Copernicus’s heliocentric model of the universe was initially met with criticism for going against the widely accepted geocentric model. Or consider how quickly factually incorrect memes make their way around social media.

The bandwagon fallacy and other logical fallacies

Another name for the bandwagon fallacy is appeal to the masses. You might notice the similarity between this and a few other fallacies, like appeal to emotion and appeal to authority. With all of these types of argument, the arguer attempts to get the other party to agree with their position through a strategy other than communicating the position logically. For example, the appeal to authority fallacy claims something is true because an authoritative source supports it, even though that authoritative source is either not qualified to make statements about the subject or that source’s expertise is overstated. Here is an example of the appeal to authority fallacy:

It shares similarities with the circular argument fallacy and, in some cases, the straw man fallacy. With the latter, an arguer might combine a straw man and the bandwagon fallacies in an argument to convince others not to support something:

In many cases, a bandwagon argument is also a hasty generalization. When you make a hasty generalization, you jump to a conclusion without sufficiently considering the relevant data. For example, you might hear that some employers in your field are seeking bilingual candidates and, in response, decide to minor in a foreign language.

Any time you make an assertion in your writing, back it up with a legitimate source. If that source is a statistic about a belief’s popularity, cite it in your bibliography. Sometimes, you might find yourself discussing a belief’s popularity or how it became widespread—discussing topics like this objectively isn’t using the bandwagon fallacy. Only when you’re presenting a subjective or overtly incorrect statement as fact and citing its popularity as the reason why it’s fact are you using the bandwagon fallacy.

Reworking sentences to avoid fallacies can make them longer and more complex, so be careful to prioritize efficient writing. Otherwise, you’ll end up with a long-winded, potentially drawn-out final draft. As you revise your work to avoid logical fallacies, also look for grammatical and syntax mistakes. Grammarly’s Essay Checker can help with this.

What is the bandwagon fallacy?

The bandwagon fallacy is the logical fallacy of claiming that a belief’s popularity means it’s correct.

How does the bandwagon fallacy work?

The bandwagon fallacy works by arguing that because so many other people hold a specific belief, that belief can’t be wrong. It makes the listener or reader second-guess any doubts they have about that belief and potentially wonder if they’re the one with the misinformed opinion.

When should you use the bandwagon fallacy?

If you are writing an advertisement, the bandwagon fallacy can be a powerful way to make your product or service more appealing. Otherwise, it’s a flawed way to support a claim.

GrammarWhat Are Filler Words, and How Do You Cut Them?
Writing, grammar, and communication tips for your inbox.