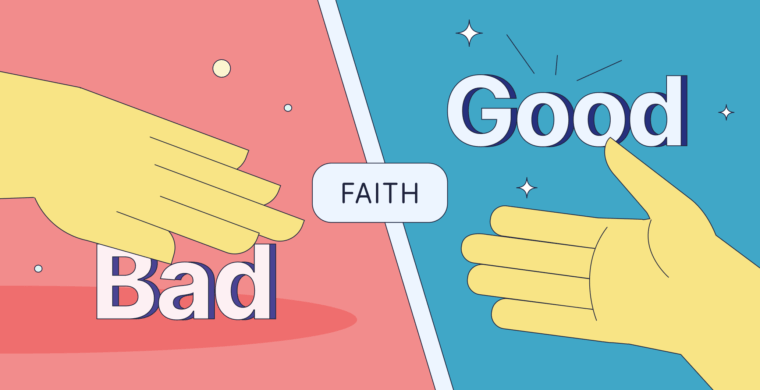 You may have noticed that we mention “good faith” and “bad faith” arguments somewhat regularly on this blog, especially in our posts on logical fallacies. Being able to distinguish between them makes you a more effective writer, reader, and debater.

There’s a lot of nuance to good faith and bad faith definitions, so we’re going to give a clear overview of both. That way, you’ll understand how to spot them and how to avoid making a bad faith fallacy in your next piece of writing.

What is a bad faith argument?

Essentially, a bad faith argument is an inauthentic argument. By this, we don’t necessarily mean a factually incorrect argument. Rather, an argument that the arguer doesn’t believe in themselves.

Many philosophers have written about bad faith arguments. Jean-Paul Sartre’s view was that any position denying humans’ free will is held in bad faith. In other words, a position one holds because of social pressure, rather than a genuine examination of the issue, is a bad faith position. Others have said that an unethical position presented as an ethical one is a bad faith argument. In this same vein, Sartre and Simone de Beauvoir connected the idea of bad faith to the concept of authenticity. They argued that if an individual isn’t lying to themselves when making a statement, that individual is speaking in good faith.

A bad faith argument boils down to whether the arguer genuinely believes the claim they’re making.

In negotiation, bad faith refers to behavior where someone claims to want to reach a fair settlement, but they actually want an outcome that favors them and their interests. Instead of compromising, they might employ delay tactics to make the negotiation drag on and become more expensive for the parties involved as a way to drive the opponent to settle for their terms, or they might demand concessions without offering concessions of their own.

What is the goal of a bad faith argument?

An individual might make a bad faith argument to undermine their opponent’s position or otherwise “win” a debate. Undermining an opponent might mean pushing them to defend an unrealistic, inaccurate version of their position in an attempt to derail a discussion, change the discussion’s topic, or bait the opponent into an argument. The opponent might be pulled into a position where they look ridiculous to their readers or viewers or be forced to debate their opponent on the opponent’s terms.

Student A: Your plan to eliminate merit-based scholarships punishes high achievers by removing their incentive to work hard. Why don’t you value academic achievement?

Student A: But then if there’s no incentive to work hard, nobody will take their studies seriously. You’re against our university’s core values.

See how Student A ignored Student B’s clarification of their position and doubled down on their inaccurate claim? That’s a bad faith argument.

What is a good faith argument?

In a good faith discussion, both parties agree to an honest, respectful dialogue. Both enter it interested in learning more about the other’s position and helping their opponent understand their own position. An individual might change their position following a good faith discussion, or they might respectfully disagree with their opponent. By contrast, if an individual enters a discussion with “an agenda,” a specific position they plan to push on their opponent regardless of the facts supporting the opposing position, they’re entering the discussion in bad faith.

What’s the goal of a good faith argument?

Student A: Your plan to eliminate merit-based scholarships removes the incentive for high achievers to work hard in college. Have you considered this outcome?

Student B: I have, but I believe there are many other incentives for students to work hard academically, like stronger employment and grad school prospects after graduation, privately funded merit-based scholarships, and a personal sense of accomplishment. I think our university should reserve its institutional scholarship funds for students with financial need, who might not otherwise have the opportunity to attend college.

In this version, Student A asks Student B to explain their position, rather than assuming their reasons for holding it.

How to spot a bad faith argument in writing

In academic writing, you’re obliged to ensure that your work is honest and factual—to the best of your ability. When you find facts from credible sources that contradict your position, the academically honest action is to acknowledge these facts in your writing and change your position in light of the facts. There’s nothing wrong with being proved wrong, but when you continue to push or defend a position that you know is flawed, you’re in bad faith territory.

As you read your own writing, check that your arguments are logically sound, and that you can support them with credible sources. If you come across a claim you can’t support or a fact that’s been disproved—or can’t be proved in the first place—remove it when you revise your work.

Being able to spot a bad faith argument also makes you a stronger reader. In essays and other pieces of nonfiction, a bad faith argument can tip you off to the author’s goals. In some cases, it can help you contextualize the work by showing you which political or industry groups funded it.

Bad faith arguments don’t appear only in editorials and other persuasive and argumentative writing. They appear in fiction, too. As a reader, recognizing a bad faith argument in a character’s dialogue can help you better understand that character and their world. For example, a character might have no knowledge of the world beyond their small town at the beginning of a novel, and out of frustration, they might make bad faith arguments when presented with facts contrary to what they’ve been taught. By the end of the novel, they might be able to recognize their past ignorance.

What is a bad faith argument?

A bad faith argument is a position that can be factually disproved, yet its proponent continues to adhere to it. If the individual knows they are being dishonest or unfair with their position, it’s a bad faith argument.

What is a good faith argument?

What are examples of bad and good faith in literature?

In the play Othello, Iago deceives Othello into believing his wife has been unfaithful. Othello becomes enraged and kills both his wife and himself.

In The Catcher in the Rye, Holden Caulfield espouses many ideas about society and individuals throughout the book. Although readers can see that these ideas are objectively wrong, they can also recognize that they come from Caulfield’s naivete. Because Holden genuinely believes the claims he’s making, he’s making them in good faith.