Grammarly
Updated on
May 27, 2019Company 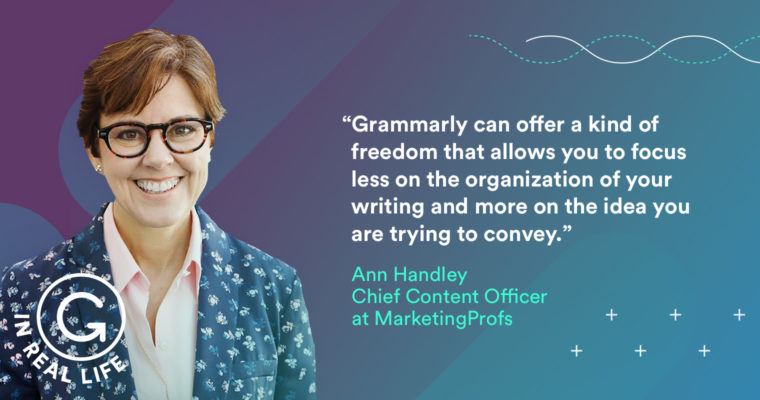 Ann Handley and Grammarly already agree on one thing: We’re all writers. We all write — emails, texts, social media posts, letters — and Handley wants to make clear writing easy. She even wrote a Wall Street Journal bestseller about it, called Everybody Writes.

Handley has been in writing and marketing for 20 years. She started in journalism at the Boston Globe, founded the online publication ClickZ, and is currently Chief Content Officer at MarketingProfs. She also has a long-running biweekly newsletter where she shares personal marketing and writing tips.

But like all of us, Handley wasn’t born an expert writer.

Handley has always loved to write. When she was a kid, she wrote a newsletter that she distributed to her neighbors’ mailboxes every week. As she grew older, Handley was drawn to journalism.

But the facts and figures required for news reporting weren’t really her style — she was always looking for details that the news doesn’t need. Her editor put her on features, where her talents could really shine.

This was on the cusp of the widespread use of the internet, and she saw the opportunity. That was the start to her career in content marketing.

Handley often says, “I’m a terrible writer, but a great editor.” Many of us may feel this way — the hardest thing about writing is often just writing. When Handley writes a first draft, she says, “I often think, ‘This is horrible. Why do I put myself through this? Who cares?’”

It’s fine to have those feelings while you write your first draft, she says — the most important thing to do is get something on paper. After that, you can do as much refining as you need. Don’t rush your ideas out the door, either.

When Handley sees poor writing, she finds that it’s usually a problem of execution. “The ideas are often good, but they’re presented poorly. If the writer had set it aside and come back to it later, the piece would be ultimately more successful.”

“It’s a struggle for a lot of writers — and when I say writers I mean communicators, which includes the marketers I’ve worked with for the past 20 years.”

Another widespread problem for writers is not thinking about their audience.

“A lot of people stop at what they want to say and stop before really considering if this will be understood by the audience,” says Handley. Something may sound great in your head, but that’s only the first step. The next is to express your idea in a way that makes people connect with it.

Over her years as a writer, editor, and marketer, Handley has developed a distinctive writing style.

“If I don’t see my name on something, I want people to recognize my voice,” she says. To that end, she keeps her personal writing voice consistent.

“The way I write a blog post is the same way I craft a birthday card for my daughter,” says Handley. “The same personality is there.”

Another important tip? “Don’t write and publish on the same day. It’s like a hard avocado on the countertop. Give it a day to ripen.”

And of course, Handley uses Grammarly.

“Grammarly can offer a kind of freedom that allows you to focus less on the organization of your writing and more on the idea you are trying to convey,” she says. It helps catch things like punctuation, spelling, grammar, word choice, and more, so you don’t have to.

That way, when you come back to your piece for a second run, you don’t have to sweat the smaller stuff.

“A lot of your voice and color that gives your writing personality comes on a rewrite,” says Handley.