Grammarly IRL: How Alex Berger Writes His Way Around the World 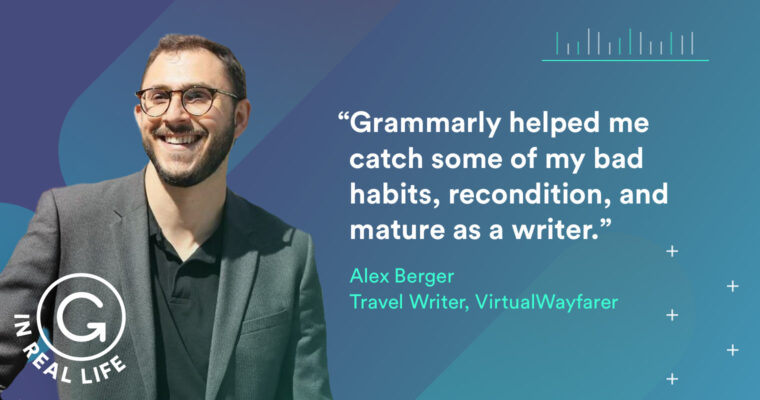 When Alex Berger was eleven, his parents pulled him and his eight-year-old brother out of school in Arizona to take a family trip around Europe. The adventure lasted almost a year, and it acquainted the future travel blogger with a wide world. It was “an early exposure,” he recalls, “to other ways people live, speak, think, and behave.”

His interest only grew from there. “Everything else I’ve done since has been built from this curiosity in cross-cultural communication,” he says.

Today, more than two decades after that European odyssey, Berger remains in motion. He publishes his writing about travel and technology on his blog, VirtualWayfarer, and he lives in Copenhagen. It’s a good life for someone who loves to experience new things and share them with readers. But finding—and refining—his writing voice was a journey of its own.

From fantasy to reality

Born in Colorado and raised in Arizona, Berger grew up in a household that valued creative learning. His father had traveled to twenty-two different countries in the 1970s to study school systems around the world as part of his Ph.D. dissertation in education—a trek Berger calls “spectacular and deeply inspiring.” Together his parents co-founded Crow Canyon Archaeological Center, a “living classroom” that teaches Native American history.

The educator parents sent their son to a Montessori school, which follows the theory that each child has their own path of development. The method makes for a great hands-on education, Berger says, and “inspires a lot of great writers.”

But his writing mechanics had to catch up with his love for long, complex books, particularly fantasy novels. On their European trip, the Bergers even read J.R.R. Tolkien’s Lord of the Rings trilogy together as a family. “All the world-building, the verbiage, the description—it was all very influential,” Berger says.

Much of his early writing came through a gaming interface. In his teens, Berger enjoyed massively multiplayer online games, which require rapid and consistent communication. “I type extremely quickly,” he says. “Accuracy was less of a priority. Sometimes my typing would get ahead of my thoughts.” This led him to appreciate the support of in-product spell checkers and other tech tools—they let him focus on the thoughts themselves.

Soon after Berger earned his bachelor’s degree in communication from Arizona State University, he decided to start sharing his thoughts in a more official capacity. While working full time as an analyst and marketer, he launched VirtualWayfarer, which focused initially on e-learning theory, workplace issues, and musings about technology.

A few months later, he decided to go on a trip through Europe—this time solo—and figured he would post about his travels instead of writing mass emails. VirtualWayfarer was reborn as a travelogue.

It didn’t take long for Berger to feel the need for a more lasting change of scenery and pace, and he decided to uproot himself and pursue his master’s. After some research, he found a school in Copenhagen, where he’d always wanted to live. With the idea that he would leave after he finished his two-year degree, he moved to Denmark.

Over the eight years since coming to Copenhagen, Berger has learned a few things. For one: He isn’t moving back to Arizona.

Another: Cross-cultural communication requires research. Even though VirtualWayfarer became one of the most widely read English-language travel blogs in the world, the name is “not a good one for a global footprint: w’s and v’s are very difficult in large chunks of Europe.”

Berger started to use Grammarly when the blog really took off. The ability to use the in-browser extension on the go was “super useful.” He admits to being “guilty, like most people, of the old it’s/its reversal,” and came to appreciate the “second set of eyes” on his blog and social media posts. “Grammarly helped me catch some of my bad habits, recondition, and mature as a writer,” he says.

He also encountered new writing struggles, finding it hard to avoid using what he calls “crutch words.” “In travel content,” he says, “the first five posts are really easy. But from there it starts to get really difficult—because you’ve landed in another ‘amazing,’ ‘incredible,’ ‘beautiful,’ ‘spectacular’ place and are eating another ‘delightful,’ ‘delicious,’ ‘succulent’ dish. Very quickly you realize that your word choice gets limited, no matter how over the top you go.”

So being a travel writer doesn’t get easier the more you do it? Not necessarily, says Berger. “It becomes harder to tell similar stories without sounding like you’re saying the same thing over and over and over again. At a certain point, you start to realize you could almost copy-paste how you’ve described a place, just swapping out the name.” The challenge becomes not just to find synonyms and alternate phrasings but to mature in your writing and get more specific, more descriptive: “the brush strokes.”

Eventually, Berger managed to take VirtualWayfarer professional, but getting paid for the blog “didn’t deliver everything I thought it might.” Doing his own sales and marketing, as well as relying on the blog’s income, was affecting his writing. Being constantly on the go was harming his relationships. So he went back into marketing, taking a job at a digital advertising agency in Copenhagen.

VirtualWayfarer continued. But Berger was also ready for a new and bigger challenge—a book.

Searching for ideas, he started reading through his birthday posts, in which he had examined what he calls “the big three elements of life: business, relationships, and culture.” Those posts had resonated with his readers and gave him “an opportunity to speak to my younger self—to process what I was learning.” He started compiling, revising, and building a manuscript.

Keeping himself to a consistent schedule, Berger completed a draft a few months later. He then used Grammarly Premium to catch errors—but also to push back against his writing tendencies. “I use a lot of passive voice,” he says. “Maybe my life would be better without it, but often I kind of like it.” Regardless of whether he accepted a suggestion or kept his original wording, the process of reviewing Grammarly’s checks “helped a lot in being able to identify tendencies and at least ask myself, ‘Is that really what you want to do?’”

Grammarly’s plagiarism search function helped him to see when he had repurposed his own content. And it allayed his fears about having accidentally presented an idea he’d read elsewhere as an original thought. “The classic heavy reader’s dilemma,” he calls. “Having the ability to double-check was really nice.”

In November 2017, only a few months after starting on the manuscript—and with just a little bit of editing help from his parents—Berger self-published Practical Curiosity: The Guide to Life, Love, and Travel. It became a best seller in multiple categories on Amazon.

Since then he’s been balancing VirtualWayfarer with his marketing work and trying to keep his English fresh while living in Denmark. Grammarly, he says, helps keep him consistent as he goes from mode to mode—business to travel, marketing deck to blog post, always in motion. “It takes different brains,” he says. “Right?”