What Is an Adjective Phrase? 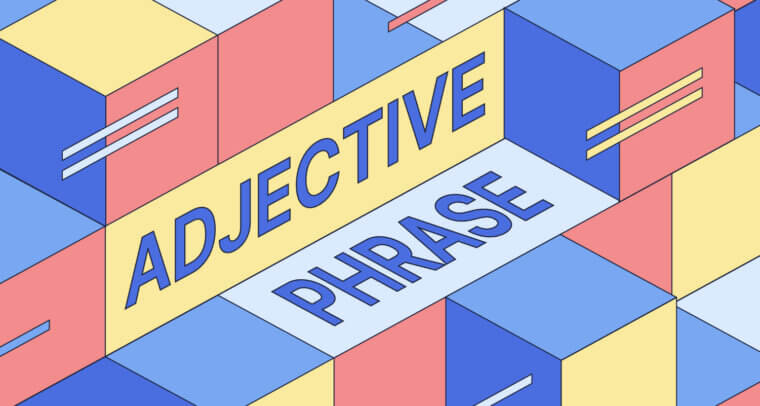 What is an adjective phrase?

To really understand what an adjective phrase is, let’s break it down.

A phrase is a group of words that’s not quite a sentence but expresses a coherent idea. They fit into sentences to provide context and clarity. Here are a few quick examples of phrases:

An adjective is a word that describes a noun. Adjectives include:

As you see in these examples, an adjective phrase can go before or after the noun it’s ultimately describing.

How to identify adjective phrases

When you need to pick out an adjective phrase in a sentence, look for the noun first. Identify who or what the sentence is about. Let’s use this sentence as an example:

After shopping around for months, I finally found a reliable, yet affordable, used truck.

There are two nouns in this sentence: the speaker and the truck. Next, look for adjectives—the words that modify these nouns. In our example sentence, only one noun, the truck, is described: It’s a used truck.

We could delete this adjective phrase, and the sentence’s meaning would stay the same: After months of shopping, I finally found a used truck. But by including the full phrase, we’re more deeply describing the exact kind of truck the speaker wanted, giving context for why they shopped around for so long.

Look for phrases that could be cut from their sentences without changing their meaning, but remain because they provide valuable context. Here are a few more bolded adjective phrases that serve this purpose:

By design, an adjective phrase contains multiple words. As you can see from the examples above, more than one of them may be adjectives. When you’re looking for an adjective phrase in a sentence, look for words that follow the Royal Order of Adjectives, the standard order English adjectives follow in sentences. Although you might not consciously think about the order adjectives need to follow in a sentence, you’ll notice when they’re out of order because the sentence will sound wrong.

Adjective phrases come in many different forms. Some incorporate comparative and superlative adjectives, such as these examples:

Compound adjectives are often part of adjective phrases, too:

And they can incorporate prepositions:

Sometimes, an adjective phrase is just a series of adjectives:

No matter what an adjective phrase contains or where it appears in a sentence, it always makes the sentence more descriptive without changing the sentence’s core meaning.

What’s the difference between adjective phrases and adjective clauses?

Here are a few examples of adjective clauses bolded within sentences:

In contrast, here are these same sentences with adjective phrases swapped in for the adjective clauses:

What is an adjective phrase?

An adjective phrase is a phrase that’s headed by an adjective and provides context, clarity, or details that support that adjective.

How do you identify an adjective phrase?

To find an adjective phrase within a sentence, locate the adjective and then determine which words are describing or adding meaning to the adjective.

What is an example of an adjective phrase?

Whether you’re communicating verbally or through writing, you want to be confident that your words are accurately expressing your ideas. Grammar mistakes and an inappropriate tone detract from your intended meaning, potentially undermining your credibility and causing others to misinterpret your message. Grammarly can help you catch any mistakes you might have missed and suggest ways to bring your tone in line with what you’re aiming to communicate.