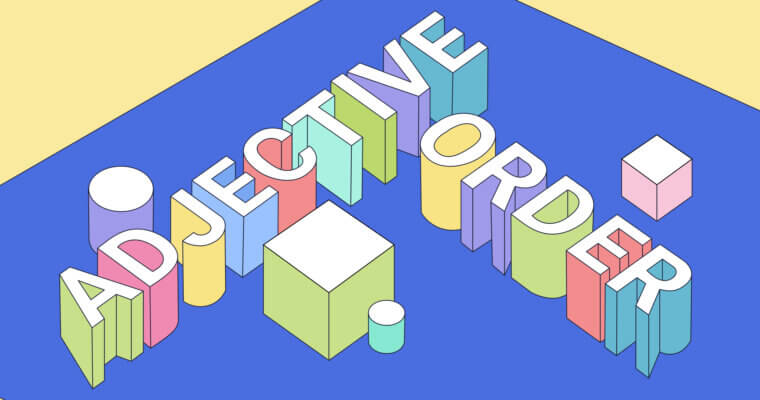 “Every Sunday, my grandma makes an Italian big meal,” said no one ever.

Why? It’s technically correct—it’s a big meal, it’s Italian food, and your grandma makes it. But it doesn’t sound quite right, and that’s because the adjective order in that sentence isn’t correct.

Most students aren’t taught about adjective order in school and instead learn it through listening and reading. In English, the rules regarding adjective order are more specific than they are in other languages; that is why saying adjectives in a specific order sounds “right,” and deviating from that order makes a statement sound “wrong,” even if it’s otherwise grammatically perfect.

Although you might not have ever seen the proper adjective order listed like this, you may have picked up on it and used it without even realizing what you’re doing. You could naturally follow this order any time you use more than one adjective to describe a noun, no matter where those adjectives fall within the Royal Order.

Take a look at this chart to see how different noun phrases illustrate the Royal Order:

See how even when you don’t use an adjective from every category, you still follow this order?

However, even with a specific adjective order to follow, there are circumstances where you need to change the order to communicate your message clearly. One of these circumstances is when one of the adjectives in your sentence is part of a compound noun. Take a look at this example:

According to The Royal Order of Adjectives, this sentence should read “She moved into a tiny brand-new house,” right? If you’re describing a smaller-than-average new house, yes. But if you’re specifically referring to a tiny house, the answer is no. There are a lot of ways English can be confusing and in some of those cases, there’s a hidden logic as to why.

Why do adjectives need to be in this order?

It’s an unsatisfying answer, but it’s the only answer: We don’t really know. However, there are a few theories. One is that the closer an adjective sits to its noun, the more vital it is to the noun’s description. For example, referring to a house as a “brick house” is more specific than referring to it as an “old house” or a “beautiful house.” But this theory doesn’t always hold up. To use another example, compare “small dog” to “black dog.” Is a black dog really a more specific description than a small dog?

Like other English language quirks, adjective order is one you just have to roll with.

When you have more than one adjective in a sentence, some need commas and some don’t.

It’s actually not that bad—there’s a logic to this one.

When two or more adjectives come from the same category, they need to be separated by commas:

When your adjectives come from different categories, they aren’t separated by commas:

And you never use a comma between the final adjective and the noun it’s describing.

You also never put a comma between a noun’s determiner and its adjectives. A determiner is a word at the beginning of a phrase that communicates how many and which noun is being described. For example:

Add some adjectives into these phrases and you get:

If you’re stuck on whether to use a comma or not, here’s an easy trick: if you can add the word “and” between the adjectives and reverse the adjectives’ order without losing the sentence’s clarity, you don’t need a comma.

In a sentence, adjectives go before the noun they’re describing or modifying. Usually.

Take a look at this sentence:

In this sentence, they follow the verb (“to be,” which is in its past tense here: was).

The sentence can easily be rewritten as:

Both are correct. But when your adjectives follow your verb as in the example above, they don’t follow the same comma rules as they would when they precede your noun. When the last word in the phrase, clause, or sentence is an adjective, it needs to follow “and”:

And when you have three or more adjectives, comma placement depends on whether your style includes the Oxford comma, otherwise known as the serial comma. If you don’t use the Oxford comma, each adjective before the second-to-last one needs to be separated by a comma:

If you do use the serial comma, each adjective needs to be separated by a comma: