2018: The Year of AI-Powered Communication 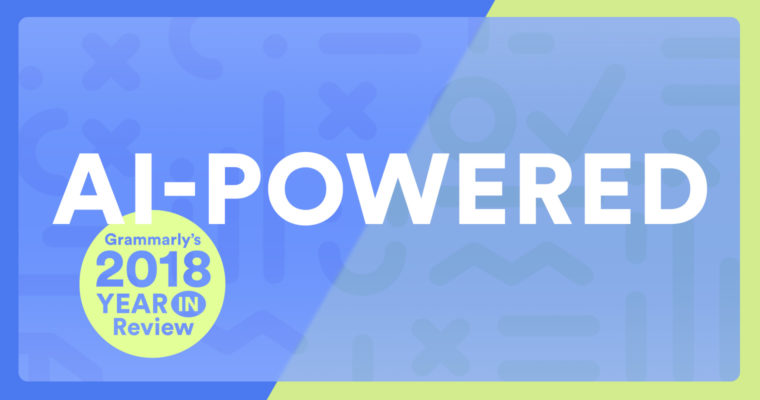 Every year brings with it new innovations to be mastered and new challenges to tackle. This year was no exception: From big tech’s various trials at Capitol Hill to the ever-increasing union of written and visual communication, there were a lot of tabs to keep open. But when it comes to writing technology, this is clear: It was a year of artificial intelligence-powered tools and features.

That said, it’s difficult to understand the full scope of the technology that’s been developed of late.

“As a whole, AI is so misunderstood that people almost have this sci-fi mentality. When they hear AI, they think the things they’ve seen in the movies and that’s the stuff that’s hyped up,” says Paul Roetzer, founder of the Marketing Artificial Intelligence Institute. “Like, that’s not real, the real stuff is these very narrow uses of AI that are built to be very specific things, like improving the content you’re writing or devising subject lines.”

And for that kind of AI, which is sometimes referred to as machine learning, it’s been a time of rapid growth. Here’s an overview of the biggest writing-technology trends from the past year:

It used to be that writing an email meant starting from scratch or using a canned response when appropriate. But now, thanks to things like G Suite’s new smart compose feature, you don’t even have to devote much energy to craft quick replies. You start typing, and words and phrases automatically populate, thereby saving you time. It’s one of those effortless features that is a basic function of AI. But this kind of effortlessness can have consequences, especially when the tech is relatively new.

“The balance between what we write and what we think is changing,” says Dr. Naomi Baron, professor of linguistics emerita at American University and author of “Words Onscreen: The Fate of Reading in a Digital World.” And that change, she says, may not be for the best since it can get people stuck in vocabulary ruts, a phenomenon that’s amplified on devices like smartphones, where that kind of AI has been a standard feature for years.

“We’re doing an increasing amount of our writing on smartphones. But if you’re working on a smartphone, you write less. It’s not worth the effort. And it limits us in our attempts to say something that’s different. When I’m traveling, I will send a response to a text or to an email, and I know they’re shorter than what I would do if I’m sitting at my computer,” says Dr. Baron. Near-human AI performance If you’re a fan of the “Star Trek: The Next Generation” series, you may be thinking about the android, Data, right about now. (And if not, he’s like a super-sophisticated, mechanical version of Pinocchio.) But, again, the real-world advances been more about AI that can be integrated into the tech you already use rather than of the tech of your Jules Verne-loving dreams.

“One of the really exciting things, in the past year especially, is that there have been a lot of advancements where you have these models that are achieving near-human performance on things like translating from English to Chinese in news articles, and it’s really spectacular,” says Courtney Napoles, a research scientist at Grammarly.

Though perhaps that futuristic image isn’t as far off as you might think, as she adds, “We’re almost at this point where we’re about to make the next great leap.”

Whether you work in marketing, where chatbots are a major trend, or not, you’ve probably come across a few in recent memory. (And in case you’re wondering what a chatbot is: Think that annoying little paperclip that Microsoft Word used to have, but for websites.) This sudden ubiquity is not a coincidence: Chatbots are growing in both popularity and usability.

“We’re seeing conversational and intelligent marketing chatbots—not chatbots where the human has written all the branching logic, but chatbots where they’re actually trying to predict the needs of a customer or someone visiting the website,” says AI expert Roetzer. Of course, not every chatbot you come across is using AI, which can be confusing for the average user.

But for those that do use AI, they’re not only becoming more independent, they’re getting smarter and chattier, too.

“This past year has seen really incredible developments in conversational agents, including chatbots that you can talk to in more natural ways to conversational robots that act like a personal assistant and make restaurant reservations for you—and have the same intonation and pauses as a real person speaking,” says research scientist Napoles.

There are so many ways to say the same thing. Take the phrase, “thank you,” for example. You could say “much appreciated,” or “thanks,” or if you’re feeling uber-zen, and are amongst friends who get you, you could say “peace, love, gratitude.” With many options come a plethora of ways for things to go wrong. So the context of the conversation is the key factor to avoid communication missteps.

When it comes to machine learning, the ability to contextualize the style of your message and tailor it to your audience has made huge advances in 2018. That means the software or tech you use can now do things like suggest more formal or polite language in a work email so that you end up looking like the smart and savvy working professional you are. That’s huge when you’re constantly fielding emails or Slack messages from co-workers and clients.

(P.S. That feature is also available in Grammarly.)

Pushes to diversify tech, on all fronts

If you happen to be someone who falls outside of the straight-white-male category (or you follow tech news), you’ve probably heard about or noticed the inherent biases in algorithmic models, and, more broadly, within the tech industry itself. It has, after all, been an issue for years.

Thankfully, however, it’s been a top-priority topic in 2018, and there have been efforts to do things like increasing the diversity of the researchers and engineers who create the various tools we use every day, both within and outside of the realm of AI and writing, according to research scientist Napoles.

“It’s one thing to be trying really hard to have less bias in your models, but it’s another thing to have people who represent different worldviews and different experiences to actually be developing them,” she says. One example: Gender. According to Napoles, in the past, there had been attempts to do things like identify gender based on text.

“Now, you don’t see people talking about identifying gender based on some latent textual characteristics because there’s a better understanding or acceptance that gender isn’t necessarily this binary label,” she says. “These things aren’t going to change overnight, but there’s a lot of talk about demonstrating the biases that exist in the research community. It’s an ongoing process, but this past year has been really exciting.”

This year has been, in a word, impressive. From the increasing ease and user-focused AI features to chatty chatbots and tech-industry changes, it’s enough to make you feel like you live in the future. And though there’s still work to be done, there’s also reason to be optimistic about the future of writing technology.

The only question is: What will writing look like in 2019?