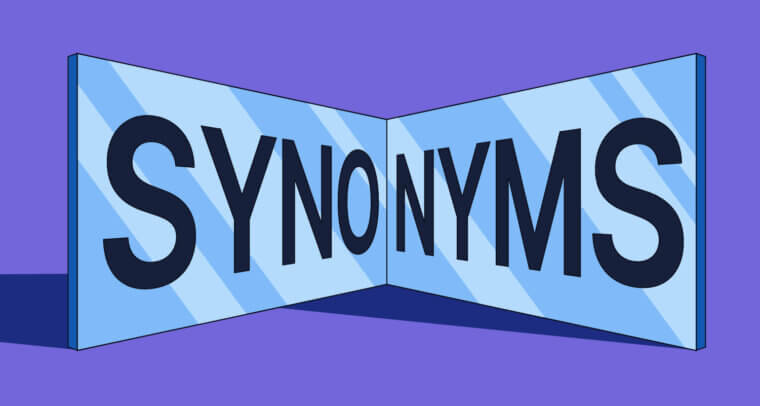 A synonym is a word that has the same meaning as another word (or nearly the same meaning). For example, beautiful and attractive are synonyms of each other because they both refer to someone or something that looks good.

Synonyms are a common part of every language, but they’re especially useful when writing, whether you’re writing a novel or a work email. Below, we explain how synonyms work and when to use them, along with the different types of synonyms. But first, let’s take a more detailed look at this question: “What is a synonym?”

What is a synonym?

Synonyms are different words that have the same or similar meanings. They come in every part of speech, including nouns, verbs, adjectives, adverbs, and prepositions.

As a synonym example, let’s look at synonyms for good. As one of the most commonly used words, good has a lot of synonyms that mean the same or almost the same thing: fine, excellent, satisfactory, wonderful, superb, etc.

Notice how the meanings are not always identical; for example, excellent is a high degree of good, while satisfactory is more like a minimal amount of good. Still, the central idea is the same: All these synonyms refer to something that is positive and not bad.

What’s the purpose of synonyms?

What are synonyms for? What’s the point of having two words with the same meaning when one is enough? There are two main uses for synonyms, which we’ll explain in detail below:

First, synonyms are crucial for choosing the perfect word. While some languages have only one word for one meaning, English uses a variety of words to convey a single meaning, each with its own unique and subtle distinction. This variety of words is partly thanks to English’s usage of loan words, or words from other languages.

Choosing the precise word is essential to writing well. The differences between good, fine, and excellent can affect communication, so if you say a meal was “fine,” it has a slightly different meaning than if you say the meal was “excellent,” even though they’re synonyms.

In short, the more synonyms you know, the better you’ll be at choosing the best word for what you want to communicate. That nuance is a significant part of all writing—especially persuasive writing, where you’re choosing words that connect with a specific type of reader.

The second main use of synonyms is to avoid using the same word over and over again. Repeating a specific word can be a problem when your writing focuses on a single topic—as writing often does—and most of your sentences involve words related to that topic. Alternating synonyms for the sake of variety is known as elegant variation.

For example, let’s say you’re writing a research paper about dogs. If every sentence used the word dog, your writing would become repetitive, and your reader might lose interest.

In this case, you’d want to alternate your sentences with synonyms of dog: You could use general synonyms like hound or canine, or if you’re talking about a particular type of dog, you could use words like puppy or mutt. You could even use slang like doggo, pupper, pooch, or furball if your writing is casual.

By alternating synonyms for each new sentence or clause, your writing becomes more interesting and dynamic. This holds the reader’s attention and makes reading your work more enjoyable.

What are the types of synonyms?

As mentioned above, some synonyms have the exact same meaning, while others have meanings that are nearly exact. With that in mind, there are three different types of synonyms, based on how similar the words’ meanings are.

Absolute synonyms are words that mean exactly the same thing; there is no difference in meaning. You can use absolute synonyms interchangeably; one synonym can replace another without changing the message.

Partial synonyms are words that mean almost the same thing, and the differences are only slight. What separates them can be a degree or amount, such as the difference between good and excellent, or one word can be a specific type of a more general word—the way a puppy is still a dog.

If you replace a word with its partial synonym, the meaning changes a little, but the main message remains the same.

Near synonyms are words that have different meanings, but their meanings are still related. These words cannot be used interchangeably; if you replace a word with a near synonym, the message becomes different. However, because they’re related, a near synonym could be a better and more accurate word choice than the original.

Synonyms get their name from synonymy, which is when different words have the same or similar meanings. But synonymy is often confused with other types of word relationships: polysemy, homonymy, and contronymy. To clear things up, let’s take a closer look at what those terms mean.

Polysemy is when one word has different meanings. For example, the word sound can sometimes mean “noise,” but other times it can mean “healthy.” The only way to tell the correct meaning is by context; if someone says they “heard a sound,” you know the meaning is noise because you can’t hear healthy.

Homonymy is when words have different meanings but either the same spelling or the same pronunciation (or both). There are two types of homonyms: homophones and homographs.

Contronymy is even rarer than the others. A contronym is a type of homonym where the words are spelled and pronounced the same, but their meanings are opposite. For example, the verb buckle can mean “to connect something”: The man buckled his belt. But it can also mean “to break a connection”: The chair buckled under the man.

Synonyms are words with the same or similar meanings. For example, a synonym of teach is educate; both words mean the same thing even though they’re different.

When should synonyms be used?

Synonyms have two main uses. First, synonyms help in word choice to find a more accurate match to the meaning you’re trying to communicate. Second, they help you add more variety in your writing and avoid using the same word too much.

What are the types of synonyms?