Which Grammar Rules Are Dying? 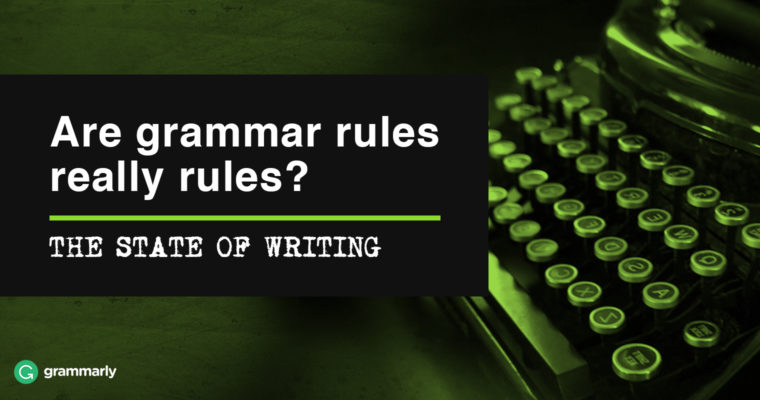 We all make mistakes. Sometimes, we even embrace them.

Such is the case with language. The words you’re reading right now are the product of centuries of slang, corruption, amalgamation, and lazy habits. The writers of today gently nudge future evolutions of English by choosing which mistakes will be acceptable tomorrow. (For instance, where you use verbs like “stung” and “stunk,” experts believe future writers may instead opt for “stinged” and “stinked.”)

At Grammarly, we’ve helped our users catch and fix millions of mistakes, ensuring their prose reads as deliberate and professional. But sometimes, writers bend the rules. And we’re not here to sneer – we’re all about putting grammar snobbery to bed!

Still, it’s fascinating to think that the rules people tend to ignore might someday not be rules at all. Here are the corrections we’ve noticed our users reject most often – which may give us some hints about changing usage and what kinds of mistakes are becoming more acceptable.

The old-school utility of the ellipsis (plural: ellipses) comes when leaving something out. Say you wanted to quote the U.S. Constitution’s protection for free speech; it’s part of the First Amendment, which fully reads:

Congress shall make no law respecting an establishment of religion, or prohibiting the free exercise thereof; or abridging the freedom of speech, or of the press; or the right of the people peaceably to assemble, and to petition the government for a redress of grievances.

That’s one hefty sentence. For the sake of brevity, you might use a couple of ellipses to winnow down the germane pieces thusly:

Congress shall make no law . . . abridging the freedom of speech, or of the press . . .

That’s when the ellipsis is working as a buttoned-down professional, anyway. In less formal contexts, it can also show points where speakers pause or trail off, like so:

In text messaging, where some conversations are never-ending, it’s that last use where the ellipsis might be coming to reflect how such exchanges also tend to trail off rather than reach a clear-cut stopping point like “goodbye.”

Another potential factor driving an uptick in off-label ellipsis use might be a shifting interpretation of the staid and serious period – which in certain contexts may now be read as a flash of passive aggression.

More than 10 percent of users faced with compound-subject problems ultimately rejected their suggested corrections – but wait, what does “compound subject” even mean?

A compound subject uses a conjunction to connect more than one noun phrase, as in “The hero and her golden retriever rescued three kittens.”

While the nouns in compound subjects aren’t typically separated by commas, they can be offset as such in cases where the second item is parenthetical: “The hero, and her sidekick, saved the kitties from a fire.”

Compound subjects can sometimes trigger subject-verb confusion. (If you find yourself tripped up by irregular verbs, know that compound subjects are always plural, as in “Onlookers and the cats’ owner were elated and grateful.”)

What this means for the evolution of language remains to be seen. But that Grammarly users often reject such corrections may suggest some inclination to sound conversationally natural, as in “The mayor says the girl’s courage and quick thinking is an inspiration.”

Hyphens tie words together. They most often come in handy when you have a compound modifier for a noun, like “rainy-day music” or “leopard-skin pill-box hat.”

But proper hyphenation can also feel deceptively complex. Hyphens are used to write out certain numbers (e.g., “twenty-three”) but they don’t apply to adverbs (“truly exciting”).

That Grammarly users don’t always opt to tweak their hyphenation (or lack thereof) may suggest a future where, sometimes, compound modifiers just feel clear enough on their own, without help from ancillary punctuation.

Grammarly users frequently opt not to capitalize the first-person pronoun, I, instead going with the lowercase, as in “i think this is peachy.” And indeed, in casual venues like social media, it’s often fine – a stylishly unkempt affectation akin to shredded jeans or untamed hair, perhaps.

One of the main factors that steers which direction language drifts is whether a given convention is easily understood; confusing or unwieldy ones are quickly abandoned. But lowercase i isn’t complicated or difficult to parse, so while it’s most likely not a stellar choice when you’re drafting a cover letter, it’s probably not about to go away, either.

A list of several items in a sentence puts the ever-industrious comma to work like so: “The author argues guns, germs, and steel all played parts in the conquest of the continent.” But that last comma, known as the Oxford comma or the serial comma, isn’t always crucial, as in this example: “The singer pleaded for his father to send help in the form of lawyers, guns and money.”

The case for the Oxford comma is that sometimes it’s essential for clarity, as in this sentence: “I’m fond of my dogs, Bertrand Russell and Ada Lovelace.” Unless you’ve selected truly erudite names to call your pets (in which case, bravo) you might want an Oxford comma to help clear that sentence up.

Still, we’ve found that Grammarly users frequently ignore suggestions to use the Oxford comma. One reason may simply be that it’s not always vital. Another may owe to its detractors; the Associated Press Stylebook, for instance, generally advises reporters and editors to skip the Oxford comma. All the same, it comes in quite handy from time to time, suggesting it’s most likely not about to disappear altogether.

In certain contexts, some prepositions just work better than others. Consider this: “Try your best out there – I believe at you.” Feels funky, doesn’t it?

Grammarly spotted some 26 million issues along these lines in users’ writing. And more than 6 percent of those who looked at potential remedies then decided “nah, I prefer it my way, thanks.”

As we ponder the ways English might change in subsequent generations, this might be worth keeping . . . in mind? Indeed, let’s stick with in, at least for now.

Why do some people write perfectly reasonable questions that end with periods instead of question marks. And what does this portend about the evolution of English?

Well, as with the ellipsis, this convention may owe something to the ubiquity of text messaging. In texts, some questions aren’t really asking for any particular piece of information or response. For instance, consider “I have an urgent deadline, can we reschedule lunch.” In this example, I’m not posing a question at all; I’m informing you that I can’t make it to the cafe today, so we’ll have to meet another time.

And while, eventually, we will assuredly hash out a new lunch plan, there’s no question mark because right now I’m not eliciting your immediate input. It’s just not something I really want while facing a looming deadline.

As to this trend’s long-term ramifications for the question mark – well, who’s to say.

Although this one might sound arcane, the challenge with subordinate clauses really just has to do with comma errors that can crop up in sentences like this one. Although the term “subordinating conjunction” may sound intimidating, it really just means words like the “although” at the beginning of this sentence here.

Subordinate clauses may sometimes make subject-verb agreement confusing, particularly when it comes to matters of singular and plural. If that’s you, don’t feel bad; we tallied almost 2 million instances where this came up. And if you were among the many thousands who shrugged and decided to stick with what you originally wrote, you may just be in the vanguard of a bold new linguistic convention.