Litotes: Definition and Examples of This Literary Device 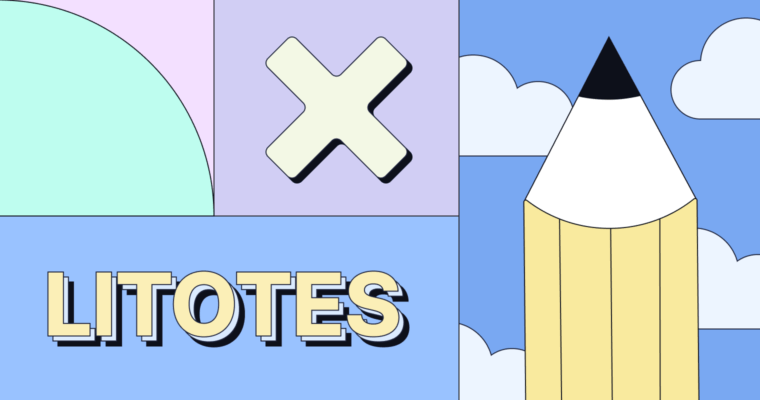 Your teacher asks to speak with you after class because your grades “aren’t exactly inspiring.” Maybe the material has been complex, so you tell her that chemistry “isn’t the easiest thing to learn.” You are both speaking in litotes (pronounced LIE-tuh-teez), understated phrases that use a negative to express a positive. Litotes are a useful figure of speech for writers to soften a statement, avoid an issue, or create a humorous understatement.

What is the definition of litotes in writing?

The definition of litotes sounds more complicated than its actual use: They are phrases that express an affirmative by denying its opposite, usually through understatement.

Some examples of litotes that you might find in everyday speech are:

You can’t say I didn’t warn you.

Meaning you did, in fact, warn them.

That wasn’t half bad.

Meaning it was actually quite good.

They’re right (though maybe you don’t want to admit it).

What are the rules for using litotes in writing?

Litotes aren’t the most straightforward way of writing. In fact, they can be pretty convoluted. If you’re not careful, this might confuse or frustrate a reader who just wants to know what the character thinks. Here are some tips for using litotes to enhance your writing:

Always include a negative: One of the defining factors of litotes is that it utilizes a negative to create a positive. This is what separates it from other forms of understatement (like meiosis). For example, if the temperature outside has dropped below freezing and an icy wind has picked up, an understatement would be something like “It’s chilly out there” (when it’s much colder than “chilly”). A litotic version, which includes a negative, would be “It’s not warm.”

Litotes are obvious: Litotes work better when they involve some exaggeration or hyperbole. For example, “I’m not going to freeze to death” is a way of using litotes to express that you will be extremely cold. A less dramatic statement, “I’m not going to be cold,” might accidentally be taken literally.

What is the purpose of litotes in writing?

Litotes have a variety of purposes, including rhetoric, emphasis, and avoidance.

The main purpose of rhetoric is to be motivating or persuasive. The less alienated readers feel from the rhetorician, the more closely they can identify, and the more likely they are to buy the message. Litotes can be a useful tool for rhetoric because their ambiguity is more inclusive.

A writer might choose to use litotes to compare a situation to its opposite extreme, thereby emphasizing how far away the two things actually are. For example, to say that a painting is “not a Picasso” emphasizes just how bad of a painting it is. By invoking Picasso, or any master artist, the gap between the present painting and the potential of painting is made clear. Similarly, the phrase “He’s no Prince Charming” draws out the differences between someone and the fairytale version of an ideal man.

The vagueness or ambiguity of litotes can be used deliberately. For instance, if your character does not want to express their true feelings about a subject, then litotes can help them skirt around it. This is similar to the literary function of euphemisms, expressions that soften an unpleasant situation. Say your character doesn’t want to get too into their politics but wants to politely express they have a different view. They might say something like “It’s not exactly who I would have voted for” and leave it at that. Context can be used to reveal that the character actually has strong feelings against that candidate but needs, in that moment, to appear diplomatic.

Frequently litotes use hyperboles to make their message more obvious (see “emphasis” above), but litotes and hyperboles are different literary devices.

Hyperbole is language that has been clearly exaggerated in order to overstate something’s value, and it doesn’t rely on negation. For instance, “This pasta is the best thing I’ve ever eaten” is probably a hyperbole, meant to illuminate a very tasty dish. Litotes uses exaggerated language to the opposite effect, in order to understate something, and does rely on negation. For example, “It’s not the worst thing I‘ve eaten” means that it probably tastes pretty good.

Examples of litotes in everyday speech

Examples of litotes in literature and poetry

Charlotte Lucas: “Miserable he may be, but poor he most certainly is not.” —Jane Austen, Pride and Prejudice

Charlotte is saying that he is, in fact, quite wealthy.

But though I have wept and fasted, wept and prayed.

Though I have seen my head (grown slightly bald) brought in upon a platter, I am no prophet—and here’s no great matter. —T. S. Eliot, The Love Song of J. Alfred Prufrock

The narrator points toward his own humanity, and the relative triviality of the situation, by negating a “prophet” and a “great matter.”

not failed to annoy us with messages.” —William Shakespeare, Hamlet

The opposite message here seems clear. He has, in fact, succeeded in annoying them with messages.

Litotes is a phrase that uses negation to create an affirmative understatement. For example, “That wasn’t half bad” uses negative phrasing to indicate that something was actually very good.

What is the purpose of litotes?

Litotes are used in writing to create more inclusive rhetoric, provide emphasis, or avoid a subject.

How are litotes different from hyperboles?