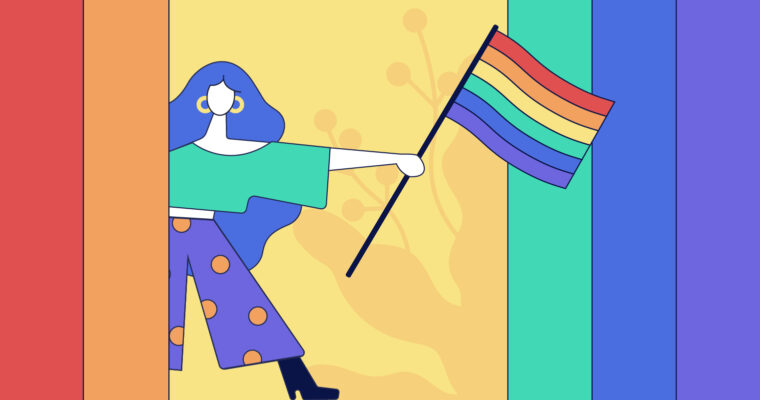 Pride Month holds a special place in Grammarly’s heart because it provides an opportunity to highlight understanding one another. We firmly believe language exists not to confuse, but to clarify, and that the education and understanding that language provides can bring us closer together and foster deeper empathy. We compiled a list of inclusive terms to help build that bridge.

Of course, while Grammarly and the queer colleagues who worked on this list are not the final word on the language of Pride (we recommend GLAAD and PFLAG for further resources), we wanted to provide a primer for anyone interested in understanding the complexity of identity and using inclusive language accordingly. Here are the terms we think are important to know if you’re looking to know more about gender and sexuality this Pride Month and beyond.

This acronym, constantly being updated, refers to all of the identities commonly associated with gender and sexual identities that are outside of the heterosexual, cisgender norm. This iteration stands for Lesbian, Gay, Bisexual, Transgender, Queer, Intersex, Asexual, and more.

This term refers to the concept of interconnected areas of oppression, how they overlap and combine, and the idea that social justice doesn’t exist in a vacuum. Read Merriam-Webster’s entry to learn more about the term’s history and usage.

Your sexual orientation is how you describe the way you experience physical attraction. Lesbian, gay, bisexual, pansexual, and asexual are all examples of these.

How you describe the way you experience emotional attraction. This may line up with your sexual orientation, but it may not. Panromantic and aromantic are examples of these terms.

This term refers to a woman who is sexually and/or romantically attracted to other women.

This term refers to a man sexually and/or romantically attracted to other men. It’s also sometimes used as a blanket term to refer to any person who is interested in the same gender as their own.

Similar to bisexual, a person attracted to many genders (usually more than two or any gender). Someone may consider themselves bisexual and pansexual, or just one or the other.

A term used to refer to someone who is not sure what their gender identity or sexual orientation is, and who is in the process of figuring it out.

Your sex is the biological combination of your bodily organs, hormones, and chromosomes. Sex and gender are associated, but not the same nor interchangeable.

Your gender expression is how you present yourself to the outside world, and how that links to the way you experience your own gender.

A set of gender-neutral pronouns used by some nonbinary or genderqueer people to identify themselves in the third person. See more about gender-neutral third-person pronouns in our blog on the subject.

This is the gender that gets assigned to you when you’re born, based on your sex organs and chromosomes.

Your experienced gender aligns with the gender you were assigned at birth.

Your experienced gender is different than the one you were assigned at birth.

Your experienced gender doesn’t align with either traditionally assigned gender, only lines up with one of them sometimes, or aligns with both and more. The terms genderqueer and agender can have similar but more nuanced associations.

Gender nonconforming is broader than nonbinary. It means your gender expression doesn’t correspond to your biological sex. You may still identify as a woman, but you may dress only in men’s clothes, for example, or you may present in a way that doesn’t align with society’s idea of male or female.

You experience no attachment to any gender.

Your sexual organs don’t fall within the sexual binary. Read more about what it means to be intersex from the Intersex Society of North America.

The act of misgendering someone is the act of deliberately or accidentally referring to someone by the wrong gender assignation.

Transition, for a trans person, could start and end with coming out as a new gender—or it could mean a life of gender-affirming hormone replacement therapy and surgery. Transition is a process, and it’s different for every trans person. No one needs to complete a specific set of steps to have transitioned.

Native American identity in which one person contains female and male spirits within them. Learn more about the history of two-spirit identity.

The feeling of expanding in your gender experience beyond current notions of gender identity, and not wanting to limit your identity to one or another.

The feeling of your appearance or outside perception of yourself not matching your gender identity. This can be treated through transition, but trans people could experience this in different ways for their whole lives.

Coming out is a unique process for every LGBTQIA+ person. It’s not a requirement for any person to come out in public. Coming out, like all things, is a process—often the first time you come out to is yourself—and you may come out multiple times in your life as you meet new people and learn more about yourself.

Living openly is the choice to live as your authentic self—to live as an LGBTQIA+ person in spite of harassment and oppression.

The practice of revealing someone else’s sexuality or gender identity without their consent.

Someone who supports the rights of the LGBTQIA+ community through action. Find out more about how you can take action to support your LGBTQIA+ loved ones here.