Bale of Hay or Bail of Hay

If someone were to read this article to you, the sentence “John had to bale out of his convertible because a bail of hay was about to fall on it” would sound perfectly fine. Even if you were to read that sentence yourself, it’s possible you could miss the two spelling mistakes in it. This is because bail and bale are homophones—they sound the same, and you can usually figure out their meanings from the context in which they are used. But when it comes to writing them, people are very often confused about which spelling should be used for which meaning.

In the sentence where John was about to learn that hay fever isn’t the worst thing hay can do to you, we’ve used bail and bale incorrectly. Or did we? Here are the most common uses of the words: Bale is a large bound stack of material, such as hay or leather; Bail is the security deposit that’s paid if someone who’s been temporarily released from jail pending a trial doesn’t appear in court. 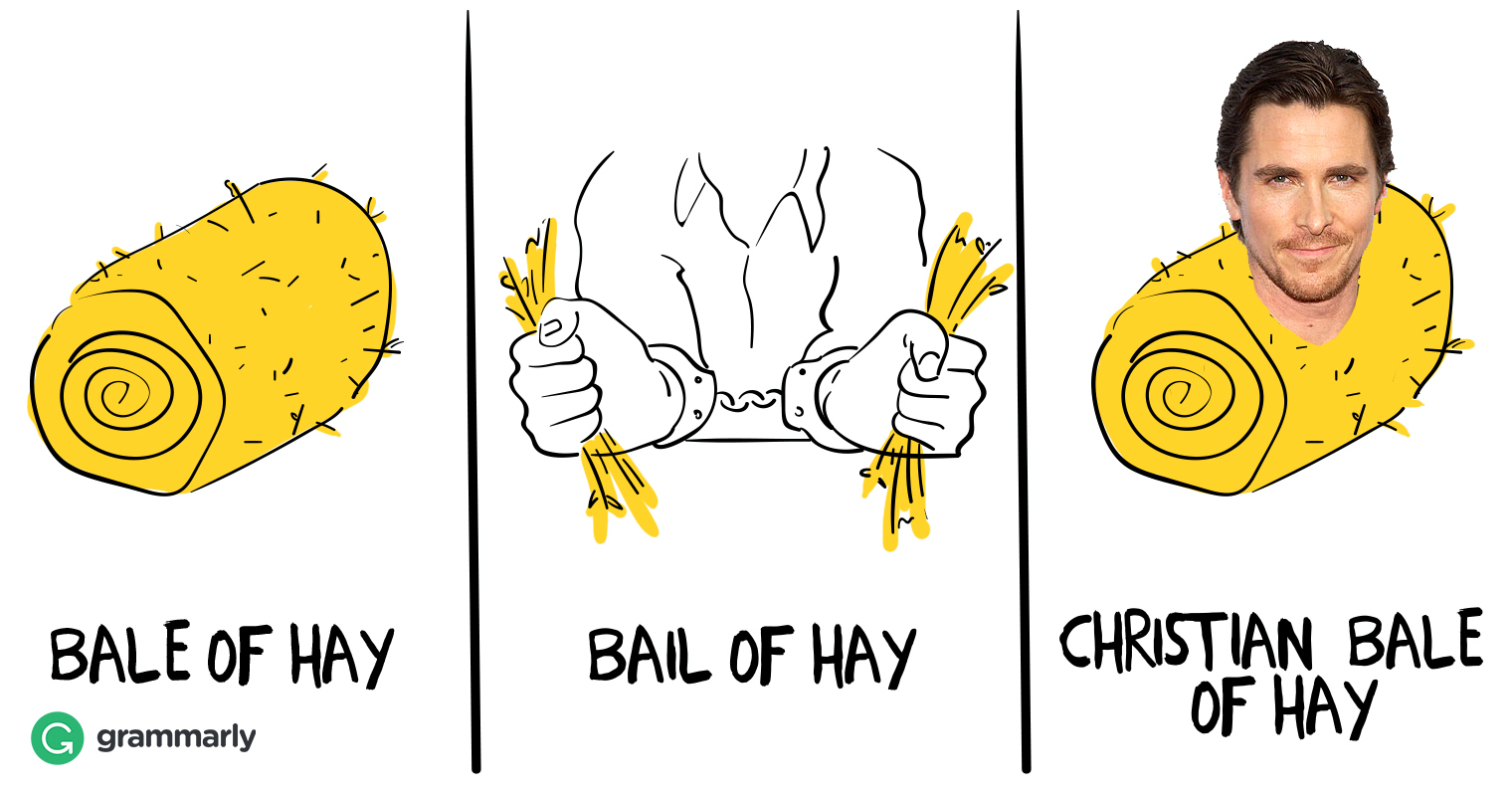 While bale and bail don’t share many of their meanings, they do overlap in one sense—the phrasal verb “bail out.” If you wanted to say that someone had to jump out of an airplane using a parachute, run from a dangerous situation, or help someone in need, you could write “bale out” instead of “bail out” if you were using British English.

Bale and How to Use It

The word bale, as we know and use it today, is what you get when you take a large quantity of material, such as hay, and bind it together:

One day Samuel strained his back lifting a bale of hay, and it hurt his feelings more than his back, for he could not imagine a life in which Sam Hamilton was not privileged to lift a bale of hay. —John Steinbeck, East of Eden

The verb we use for the process of binding material to create a bale is also bale:

Typically, knives need sharpening every 500 to 1,000 bales, depending on the material baled, and it is important to sharpen them correctly if they are to stay the course. —The Irish Independent

In the past, bale was also a noun that meant great evil, woe, or sorrow. The traces of that meaning can still be found today in the adjective baleful:

For the enemy is not Troll, nor is it Dwarf, but it is the baleful, the malign, the cowardly, the vessels of hatred, those who do a bad thing and call it good . . . —Terry Pratchett, Thud!

In British English, bale can be used instead of bail in the phrasal verbs “bail on” or “bail out:”

Wünsche’s plane was hit and he baled out, surviving with burns and leg injuries and returning to active service the following year. —The Guardian

Bail and How to Use It

The most common use of the word bail as a noun has to do with temporary release from custody of a person who is accused of a crime, in which money can be deposited as a guarantee that the person will appear in trial:

A Kenyan court granted bail on Thursday to a British business executive charged with the murder of a Kenyan woman, his lawyer said. —Reuters

Bail can also be used as a verb in the same sense:

Alleged Brit hacker Lauri Love, who is accused of compromising US government servers and faces extradition to America, has been bailed by a UK court. —The Register

While bail has many other meanings, both as a verb and a noun, the one that’s most interesting is the one that overlaps with bale in British English. It is derived from the archaic use of the noun bail for a bucket that’s used to remove water from a ship. This is where we get the verb bail, which refers to removing water from a ship with a bucket or removing water in general:

And if my choice is to sit graciously in my best robes and accept the inevitable or to bail a sea with a bucket, give me the bucket. —Robin McKinley, Chalice

In that sense, the phrasal verb bail on is used when we want to say that we let someone down or skipped something:

After one designer bailed on an assignment, I gave her a 3. —Fortune

And we also use the verb bail out for jumping out of an airplane with a parachute in a dangerous situation, or generally for removing ourselves from tough situations, or helping others in tough situations:

Brazil’s federal government plans to bail out the state of Rio de Janeiro with 2.9 billion reais ($849 million) as it struggles with a fiscal crisis less than two months before the Olympic Games begin. —The Wall Street Journal