What’s an Ellipsis? Definition and Examples 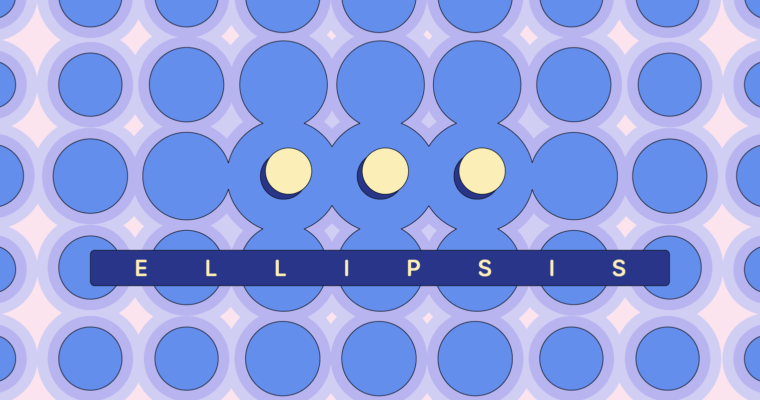 An ellipsis, or ellipses in the plural form, is a punctuation mark of three dots (. . .) that shows an omission of words, represents a pause, or suggests there’s something left unsaid. Known casually as dot, dot, dot, the ellipsis is a favorite tool of writers because it can symbolize silence in text, but it’s also used more practically to show that a direct quote has been altered.

Ellipses can be powerful tools for writing . . . if you know how to use them. Below, we give a more thorough ellipsis definition and explain how to use those three dots in writing. We also clear up the ellipsis vs. ellipses debate and share plenty of ellipsis examples to demonstrate its use.

What is an ellipsis?

The ellipsis (pronounced il-LIP-sis) is a type of punctuation that represents a pause or that something has been intentionally left out. Specifically, it shows that words have been cut from a direct quote, so the reader knows the original passage has been modified.

In form, the ellipsis is three dots or periods. Different style guides have different regulations for ellipses, but we prefer the version with spaces between the periods (. . .) from The Chicago Manual of Style.

In formal writing and journalism, the ellipsis is placed between brackets when used within a quote [. . .] to show that the editors added the ellipsis, not the original speaker.

When it comes to usage, the ellipsis resembles a couple of other punctuation marks: the dash and the colon.

While the ellipsis and the dash both represent breaks in text, the dash—or more precisely, the em dash—represents an abrupt interruption. The dash can also be used to represent a pause, but a more emphatic one than the “soft” pause of an ellipsis.

The colon also represents a break in text, although for much more deliberate reasons. Colons are used to introduce a list, quote, or explanation of what precedes it. However, unlike ellipses and dashes, they do not represent silence.

Furthermore, neither the dash nor the colon can represent omitted words; only the ellipsis can do that.

There’s a lot of confusion over ellipsis vs. ellipses, but the truth is that they’re the same word. Ellipsis is singular, and ellipses is plural.

Even this can be confusing because there are three dots involved. So to be clear, a single ellipsis is one group of three dots, while multiple ellipses are two or more groups of three dots.

When to use an ellipsis, with examples

While there are many types of ellipses in linguistics, an ellipsis in writing carries out four main duties:

In writing, ellipses are used to show the reader that words have been removed, typically from direct quotes. More often than not, this is done to cut out parts of the quote that aren’t relevant to the topic or to make the quote more succinct.

For example, if you want to include what a speaker said at the beginning and the end of a quote, but there’s a part in the middle that’s unnecessary, you can remove that middle part and replace it with an ellipsis.

It must be obvious, from the very start, that there is a contradiction in wanting to be perfectly secure in a universe whose very nature is momentariness and fluidity.

[QUOTE WITH AN ELLIPSIS]

It must be obvious [. . .] that there is a contradiction in wanting to be perfectly secure in a universe whose very nature is momentariness and fluidity.

When using an ellipsis to omit part of a quote, be sure to pick the right spot. It’s best to remove a part that leaves the remaining sentence grammatically correct, as if nothing had been cut at all. In the ellipsis example above, the part removed came between two commas, so the sentence still works fine without it.

Though it’s less common, an ellipsis can also come at the beginning of a quote to show that the earlier part of a speech or conversation has been cut off. This is an effective way to open a scene in the middle of a dialogue, where the reader must guess at what the characters were talking about beforehand.

“. . . and you wouldn’t believe the smell! We spent the rest of the afternoon cleaning it up.”

2 Pause for dramatic effect or suspense

An ellipsis can also be used to depict a small pause or silence in text, which is ideal for a dramatic effect. Often, the ellipsis comes before an anticipated part, like the punchline of a joke. The idea is to build suspense before a big reveal.

With sweaty palms, I reached out for the knob and threw the door open to reveal . . . a lost puppy.

3 Trailing off into silence

In speech, we sometimes leave sentences unfinished for a variety of reasons. Maybe we forgot what we wanted to say, or maybe our listeners already know what we’ll say, so we don’t need to say it.

In writing, this occurrence is represented by an ellipsis. When an ellipsis comes at the end of a sentence or quote, it means that the speaker has trailed off before finishing.

This can be a great storytelling tool in the right spot. It essentially challenges the reader to imagine what will happen next, heightening their anticipation and engaging them more deeply. It works best for cliffhangers and other endings, but be sure to use it sparingly so you don’t waste its effect.

What is an ellipsis?

An ellipsis is a punctuation mark of three dots (. . .) that shows an omission of words, represents a pause, or suggests there’s something left unsaid.

How does an ellipsis work?

When should you use an ellipsis?