What Is an Oxymoron? Definition and Examples 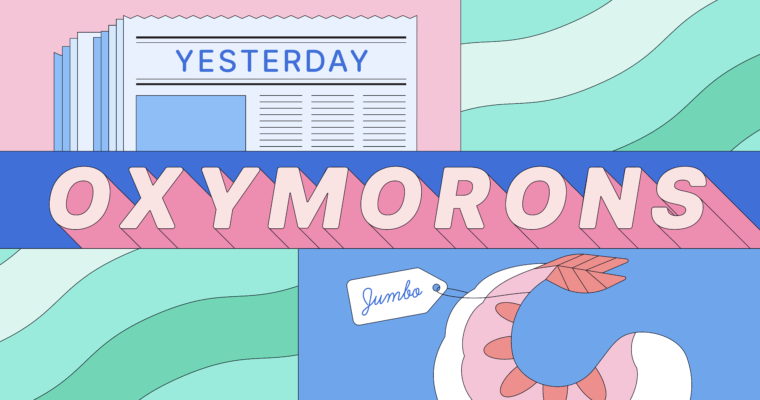 An oxymoron is a figure of speech that combines contradictory words with opposing meanings, like “old news,” “deafening silence,” or “organized chaos.” Oxymorons may seem illogical at first, but in context they usually make sense.

Oxymorons can be clearly confusing (see what we did there?), so this article explains everything you need to know. We’ll provide oxymoron examples and provide guidance on how they’re used, but first, let’s look at a more thorough oxymoron definition.

An oxymoron is a literary device that juxtaposes contradictory terms. Oxymorons are often used poetically as a way of bringing out a fresh meaning in a word or phrase. Like a paradox, an oxymoron is what’s known as a “contradiction in terms,” although oxymorons and paradoxes are two different things, as explained below.

The word oxymoron is an ancient Greek word, which translates most closely to something like “sharply dull” or “cleverly stupid.” In other words, the oxymoron definition is itself an oxymoron.

Oxymorons have been used for millennia. More than a few have even become commonplace expressions in modern-day English, such as these oxymoron examples:

What is the purpose of oxymorons?

As with other literary devices like metaphor, onomatopoeia, and hyperbole, oxymorons have a few different purposes in writing, all of which are quite useful in the right situation:

As a contradiction of terms, an oxymoron both stands out and also elicits critical thinking. The reader must momentarily pause to comprehend and process the meaning—in other words, oxymorons make the reader think.

Oxymorons tend to have deeper meanings and be more memorable than noncontradictory words, so they work great at key points in your writing for boosting reader engagement. They also occasionally work well with figurative language to compound the power behind certain words.

Oxymorons present an ideal opportunity to be clever or funny. The inherent setup of contradictory words works great for jokes and other witty statements. Consider these oxymoron examples:

“I am a deeply superficial person.” —Andy Warhol

Present words in a new way

Placing contrasting words next to each other makes each one stand out more, just like placing contrasting colors together. Highlighting their differences accentuates their meaning and the words come across stronger. That makes oxymorons a serious option in word choice.

Consider the oxymoron example deafening silence. On its own silence is fairly neutral—it can be calm or tense, depending on the context. But pairing it with deafening gives silence a very distinct meaning, comparing it to a loud noise that draws extra attention. This presents the word silence in a unique way that’s particularly expressive.

As rhetorical devices, oxymorons have been used in many different mediums from political speeches to novels to stage plays. (One, in particular, is in Romeo and Juliet by William Shakespeare, wherein “combining things that contrast” is an ongoing theme.) Here are some of the more famous oxymoron examples from historical literature:

“All the pain he had endured was as nothing compared with the exquisite agony of this.”

—Jack London, The Call of the Wild

With loads of learned lumber in his head . . .” —Alexander Pope, “An Essay on Criticism”

“Of melancholy merriment, to quote.”

“His honour rooted in dishonour stood,

“Parting is such sweet sorrow.”

“A damned saint, an honorable villain!”

What is the difference between oxymoron and paradox?

Oxymorons are often confused with paradoxes—after all, both are textbook contradictions of terms. Despite the similarities, however, oxymorons and paradoxes are two different types of literary devices, each with their own special usage.

We already gave an oxymoron definition above, so here let’s talk about paradoxes. A paradox is a statement that technically contradicts itself but remains true nonetheless. It may seem illogical or unrealistic, but, upon reflection, it’s based in reality and stems from valid reasoning. Consider these paradox examples:

“You have to spend money to make money.”

“Slow and steady wins the race.” “I can resist anything but temptation.” —Oscar Wilde

An oxymoron is a figure of speech that places contradictory terms next to each other in a word or phrase. As a literary device, it is used to make certain word combinations more thought-provoking to stand out.

What are some oxymoron examples?