A metaphor is a figure of speech that describes an object or action in a way that isn’t literally true, but helps explain an idea or make a comparison.

Here are the basics:

If you’re a black sheep, you get cold feet, or you think love is a highway, then you’re probably thinking metaphorically. These are metaphors because a word or phrase is applied to something figuratively: unless you’re actually a sheep or are dipping your toes in ice water, chances are these are metaphors that help represent abstract concepts through colorful language.

Remember to check your knowledge at the end with our Metaphor vs. Simile Quiz. 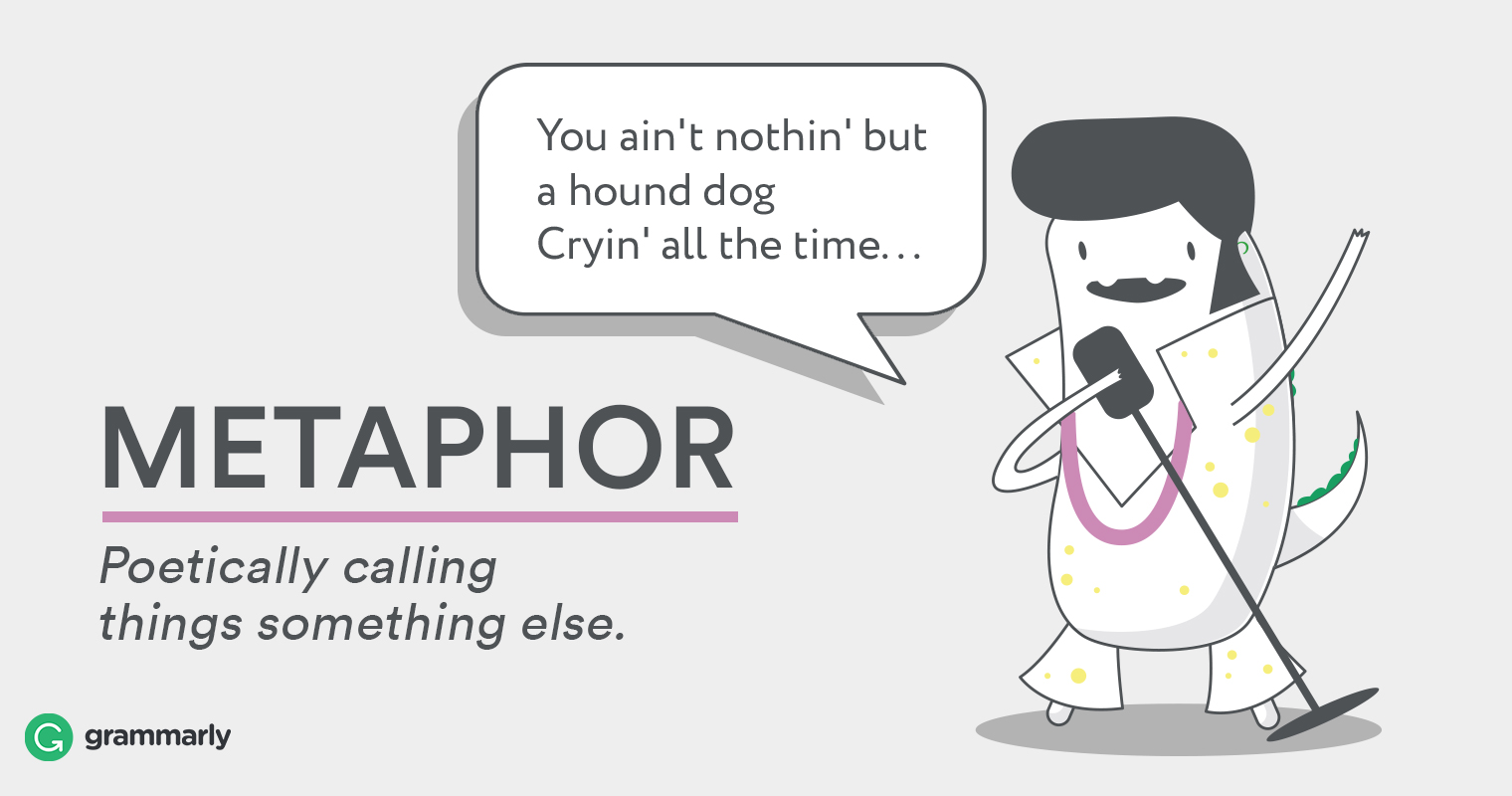 Those are the uses of metaphor, and this is the official definition:

Metaphors are a form of figurative language, which refers to words or expressions that mean something different from their literal definition. In the case of metaphors, the literal interpretation would often be pretty silly. For example, imagine what these metaphors would look like if you took them at face value:

Love is a battlefield.
Bob is a couch potato.
Baby, you’re a firework.
I am titanium.

Once you get past the image of going on a date armed with a battleaxe or David Guetta made out of corrosion-resistant metal, the result is a much more powerful description of people or events than you’d get with phrases like “love is difficult” or “I’m very strong.”

Metaphors show up in literature, poetry, music, and writing, but also in speech. If you hear someone say “metaphorically speaking,” it probably means that you shouldn’t take what they said as the truth, but as more of an idea. For example, it’s finals period and after exams, students are saying things like “That test was murder.” It’s a fair guess they’re still alive if they’re making comments about the test, so this is an example of speaking metaphorically or figuratively.

Metaphors can make your words come to life (or in the case of the exam, to death). Often, you can use a metaphor to make your subject more relatable to the reader or to make a complex thought easier to understand. They can also be a tremendous help when you want to enhance your writing with imagery. As a common figure of speech, metaphors turn up everywhere from novels and films to presidential speeches and even popular songs. When they’re especially good, they’re hard to miss.

All the world’s a stage, and all the men and women merely players. They have their exits and their entrances.
William Shakespeare
America has tossed its cap over the wall of space.
John F. Kennedy
Chaos is a friend of mine.
Bob Dylan
A good conscience is a continual Christmas.
Benjamin Franklin
You ain’t nothin’ but a hound dog, cryin’ all the time.
Elvis Presley

If you’re trying to tell the difference between metaphors and similes, the more obvious comparison in similes makes them easier to identify as figures of speech.

While someone might actually think that Elvis Presley has a hound dog who happens to be particularly noisy, imagine if his lyric went “You’re like a hound dog,” or “You’re as whiny as a hound dog.” In these cases, Elvis would be using a simile, which makes it a bit clearer that he’s not actually singing to a sad puppy. But on the flip side, the rhythm wouldn’t be quite as catchy.

Read up on similes, and check out these examples to get a taste for how they work:

She’s as cute as a button.
It’s like shooting fish in a barrel.
He’s as nutty as a fruitcake.
Ogres are like onions.*

*That one’s from Shrek.

Let’s rewind to the definition of a metaphor as a figure of speech. Another example is that catchy tune, “You are my sunshine.” Although you aren’t literally a ray of light, you probably have a similarly uplifting effect on the speaker.

But the definition of metaphor is actually broader than that. Often, metaphor is used loosely to mean any kind of symbolism. In literature, there are are many other types of metaphors, too: implied, sustained, dead, and others.

Here’s a tip: Implied metaphor departs from the “thing A is thing B” formula and allows you to make a more sophisticated and subtle type of comparison through—you guessed it—implication.

Jordan got his courtship cues from the peacock. In a room full of ladies, Jordan simply fans his feathers.

In both sentences, we are comparing Jordan to a peacock. In the first sentence, the comparison is overt: the peacock is mentioned directly. But in the second sentence, we imply that Jordan is the peacock by comparing his behavior (fanning his feathers) to something peacocks are known for doing. That isn’t meant to suggest that Jordan actually has feathers, but that he is behaving in a showy and flirty way to catch the attention of the ladies.

Here’s a tip: A sustained metaphor is carried through multiple sentences or even paragraphs. Because it is used and developed over a longer section of text, a sustained metaphor can be a powerful literary device that provides strong, vivid imagery in the reader’s mind.

This kind of metaphor is often found in songs and poetry. In a famous example from Shakespeare, Romeo compares Juliet to the sun over several lines.

But soft! What light through yonder window breaks? It is the East, and Juliet is the sun! Arise, fair sun, and kill the envious moon, Who is already sick and pale with grief.

Kind of puts “You are my sunshine” to shame.

Here’s a tip: A dead metaphor is a cliche that has become so commonplace that the imagery has lost its power. Examples of dead metaphors include: “raining cats and dogs,” “throw the baby out with the bathwater,” and “heart of gold.”

With a good, living metaphor, you get that fun moment of thinking about what it would look like if Elvis were actually singing to a hound dog (for example). But with a dead metaphor, the original image has already receded into the background. Using too many dead metaphors will cause your reader to lose interest. Reach a little further for an original image, or think about ways to use a familiar metaphor in an unconventional way.

Watch Out for Mixed Metaphors

Another reason to avoid dead metaphors is that it’s easy to mix them up.

Mixed metaphors can be pretty funny; the great Yogi Berra was famous for his “Yogi-isms,” which often contained bewilderingly mixed metaphors that still managed to get his point across:

Even Napoleon had his Watergate.

But if you’re not trying to be funny, mixed metaphors can come off as awkward or even undermine the point you’re trying to make.

How to Come Up with a Metaphor

You don’t need anything but your imagination to come up with a good metaphor, but some added flair can go a long way. Remember, metaphors often represent something that is hard to take literally. Think of the metaphor “rule with an iron fist” as an example. Outside of the world of George R.R. Martin’s Game of Thrones, it would be a bit difficult to find a person with an actual hand made of iron. However, we are still able to interpret that metaphor as meaning someone who is hard and heavy-handed on governance.

Here’s a tip: When you are coming up with your own metaphor, stick to concepts that people are familiar with but wouldn’t necessarily associate with a person.

Here is a simple example:

It’s been a real circus at home since Mom went on vacation.

You wouldn’t typically refer to your house as a circus, but this sentence implies that things are wild, full of excitement, and maybe a bit chaotic with Mom out of the house.

The next time you think your writing could use some energy, try giving it a jolt with a well-crafted metaphor. It’s sure to be a lightning bolt for your writing.

Metaphors are often confused with similes because they serve similar functions. Take our short quiz to check your understanding of metaphors and similes. 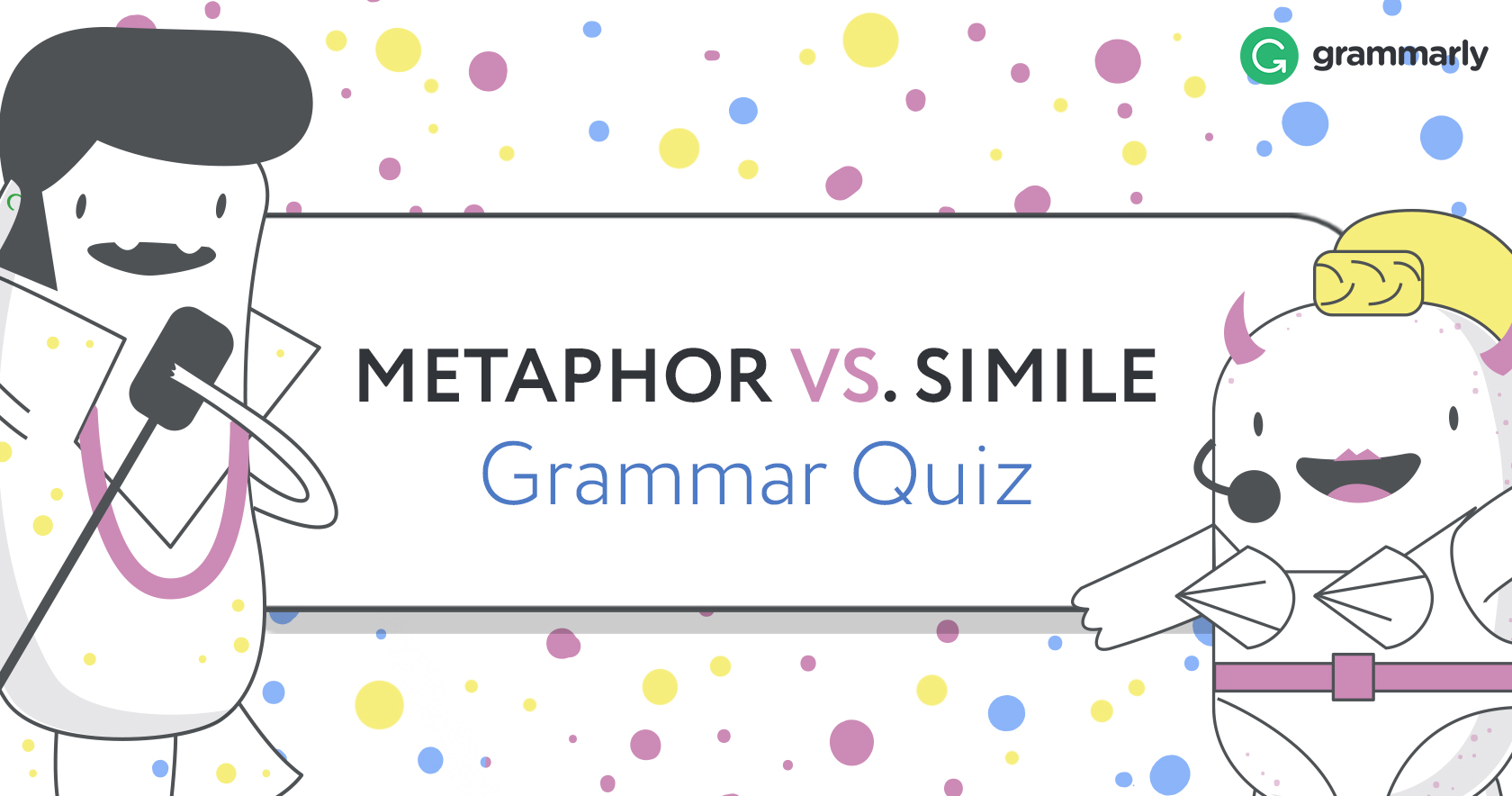