Business Advice from CEOs You Should Consider 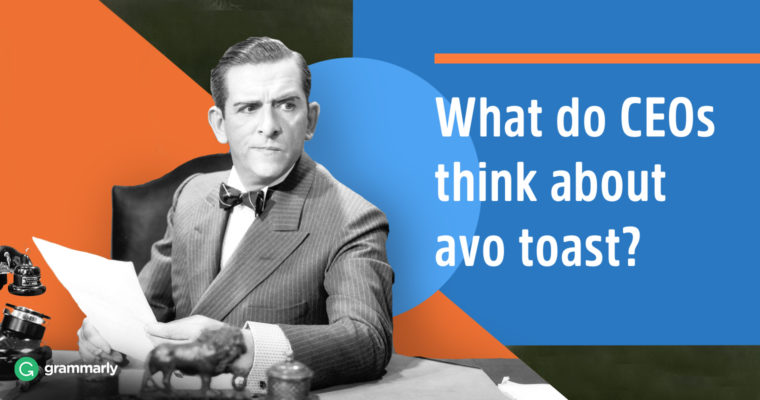 Do you like avocado enough to trade your house for it?

Some people face this choice every day, according to one prosperous CEO, Tim Gurner. In an interview with an Australian news show, the thirty-something millionaire blamed avocado toast and fancy coffee for this generation’s lack of funds.

“When I was trying to buy my first home, I wasn’t buying smashed avocado for $19 and four coffees at $4 each,” Gurner said.

The Internet responded with a roar of protests, from passionate defenses of the health benefits of avocados to calculations—forfeiting twice-weekly avocado toasts every month for five years will earn you an $11,000 dream palace.

To those millennials, here’s a promise: No avocados, or other superfoods, will be maligned in this article. If you are unwilling to give up your favorite snacks, let’s look at some of the best business advice that we found from other successful CEOs.

“When you innovate, you’ve got to be prepared for everyone telling you you’re nuts.”

This suggestion comes from billionaire Larry Ellison, the co-founder and former CEO of Oracle, a multinational computer technology company that is responsible for many platform services and cloud applications.

While working for IBM, computer scientist Edgar F. Codd invented relational database systems, but he concluded that the premise would see “no commercial potential.”

Ellison, on the other hand, saw the potential and ran with the idea all the way to the bank. He didn’t worry about the people who didn’t share his vision and neither should you.

Don’t be discouraged if you catch flak from doubters; you’re in good company. And what a story you’ll have to tell when you achieve your goals!

Is a definition in order? Probably so . . . Something fungible is replaceable or interchangeable with an identical item. You can thank Larry Summers, former U.S. Secretary of Treasury, for this wisdom.

Working in the treasury must have made Summers an expert in fungibility. Money, you see, is fungible. If you loaned twenty dollars to someone, you wouldn’t expect the debtor to return the exact bill you lent. Any twenty dollar bill will do, right? To advance in your career, however, you want to stand out from other employees.

Summers doesn’t leave you in the dark about how to differentiate yourself from a crowd of coworkers: “Have a distinctive expertise or perspective,” he said.

What’s your strength? Identify it as Summers noted, and let it shine!

“I don’t think it matters how small or how big the task is, if you can do it just a little bit better than what is expected, you will be noticed and rewarded.”

You don’t feel uniquely talented? Then, work harder than everyone else like Jeffrey Katzenberg, the co-founder of DreamWorks. Katzenberg’s production company is responsible for wildly popular films, including The Boss Baby, Shrek, and Kung Fu Panda.

According to Katzenberg, the mission of every DreamWorks film is to exceed the audience’s expectations. On your next project, ask yourself, “What you can do to take it to the next level?”

Don’t be discouraged if you don’t wow your colleagues every time. Even Katzenberg admits that not every movie is as successful as they’d like them to be. However, building a reputation for going the extra mile will ensure that people will want you on their team for the long run.

Meg Whitman of Hewlett Packard offers sage advice for anyone who feels inadequate or ill-prepared for a job because of gender or any other reason. Rather than avoiding challenging tasks, you should seek them. By doing so, you give yourself an opportunity to learn new skills, and you also learn more about yourself. Perhaps you are underestimating yourself! Of course, some abilities may lie beyond your scope. But you won’t know what your boundaries are until you push them. What goal can you stretch toward next? A good rule of thumb is to reach out just a little beyond what you’ve already accomplished for each objective.

The money you probably save on doctor’s visits and medicine alone makes it worth the effort.

To be fair, Gurner admits it wasn’t only evading the temptation of smashed avocado toast with feta crumble that paved his way to property ownership. His boss invested in his first place, and he combined the profits from that place with a loan from his grandfather to fund his next venture.

What he really means to say is that you have to work hard and avoid unnecessary excesses if you want to save for a home or business. Let’s cut the guy a break and take inspiration from his counsel.

Smash your (preferably home-grown) avocados yourself and limit your discretionary spending. Soon after, you’ll be the one offering sage business advice as a CEO of a high-profile company.

WorkplaceHow to Measure Your Goals as a Writer and Business Professional

WorkplaceHave a Great Boss? Capitalize on It to Boost Your Career