5 Writing “Rules” That Are Really Guidelines 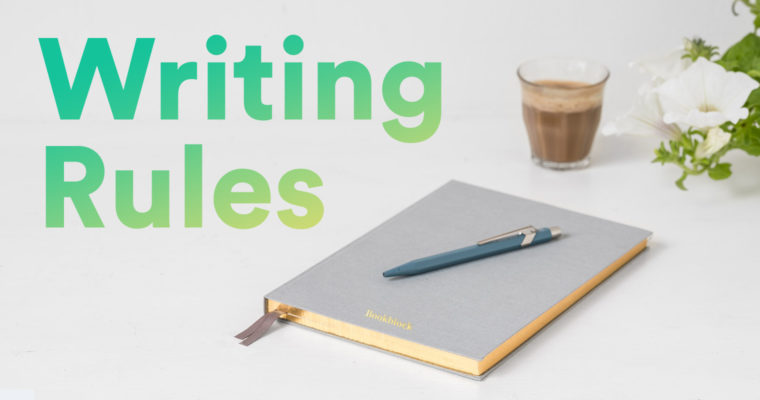 If you go in search of rules about writing, you’ll find plenty. Some rules you come across will be quite specific, like whether or not to use a comma with a conjunction, and others will be broad, like Strunk and White’s brief but vague directive to “omit needless words.” But when it comes to great writing, not all rules are created equal. In fact, some rules are really more like guidelines. Here are five pieces of good writing advice that you can and should ignore once in a while.

Use the active voice

For example, sometimes it just isn’t important or helpful to specify who performed the action you’re talking about. Here’s an example where the passive voice is the better choice: This house was built in 1960. Rewriting the sentence in the active voice would not only require you to dig up information you may not have, it would also bog down the sentence with an unnecessary detail. A development company built this house in 1960. Does it really matter who built the house? Probably not, unless someone has specifically asked for that information.

Adverbs get a bad rap because it’s so easy for writers to rely on them to pad out a sentence full of bland verbs. “Don’t write ran quickly,” goes the classic advice. “Write sprinted instead.” It’s true that sprinted is more precise and interesting than ran quickly.

F. Scott Fitzgerald said that using an exclamation point is like laughing at your own joke. Maybe that’s true in some situations. After all, when you need to make an important point in an essay or you’re trying to add excitement to your novel, you can’t just rely on punctuation marks.

But now that most of our remote communication takes the form of texts, emails, and instant messages, exclamation points have emerged as an important tool for conveying tone. If you want to risk sounding sarcastic, go ahead and write Congratulations on your new job. How wonderful.

If you were taught that a sentence fragment is a grammatical error, you’re not alone. But the truth is, sentence fragments are an important technique for creating voice and tone in your writing.

Not convinced? There are a few of them sprinkled throughout this article. There’s one in this very paragraph, in fact! They help lend a casual, friendly tone to a piece of writing. The trick is to avoid going overboard. Too many fragments will make your writing choppy and confusing. And of course, sentence fragments that show up in the wrong context—say, a term paper or a formal business document—can come across as sloppy or too informal.

There are a lot of variations of this “rule” floating around out there. In school, many of us learned that a paragraph requires a topic sentence, several supporting sentences, and a concluding sentence. When you’re first learning to organize your thoughts on paper, this formal structure gives you a tried-and-true template to follow. But as your writing skills grow, staying chained to this rule will limit your ability to write effectively.

Particularly when you’re writing online, short paragraphs of just one or two sentences are often the best way to help your reader absorb your point quickly.

Remember, to be a good writer, you need to learn the rules of writing. But to be a great writer, you also need to learn when to break those rules. The most important thing to remember is that writing is about communicating. When a rule gets in the way of what you need to say, sometimes the best decision is to toss that rule out the window—temporarily, at least!