Grammarly
Updated on May 16, 2019Grammar 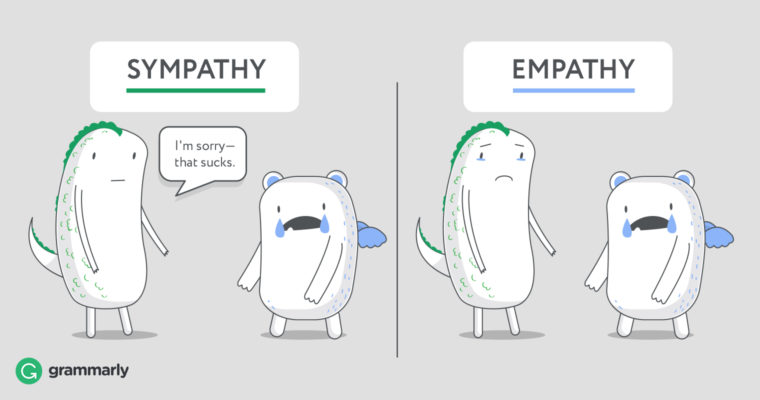 In 1855, Walt Whitman described his reaction to a person in pain in his poem “Song of Myself.”

My hurt turns livid upon me as I lean on a cane and observe.

What did the poet mean when he said that he would “become the wounded person?” Would his transformation be an example of empathy or sympathy? What’s the difference between empathy and sympathy? The words are easy to confuse. They are both derived from Greek, and the spelling only differs by a couple of letters. It’s almost as if they were made to be used as synonyms. But they weren’t.

The difference between sympathy and empathy

Of the two words, empathy is the more recent entry into the English language. Sympathy was in use for almost 300 years before empathy’s first written record in the nineteenth century. You might notice that both words contain -pathy, and that’s what makes them sort of similar – they share the same Greek root word pathos, which means “feelings” or “emotion,” but also “suffering” or “calamity.” But while both words deal with emotions, they are still very far from being synonyms.

Sympathy derives from Greek words meaning “with feeling.” The word is most commonly used to describe the way we share someone else’s feelings, especially feelings of sorrow or trouble. Hence, greeting cards given to mourning families are called sympathy cards. Sympathy can also refer to the sense of harmony between people with the same tastes, disposition, or opinions. When a person feels sympathy toward a cause or an organization, he has feelings of approval, loyalty, or support.

The Greek phrase that lends empathy its meaning is “passion from feelings or emotion.” Most people know empathy has to do with understanding and sharing the experiences, feelings, and emotions of another person. However, empathy can also refer to using imagination to ascribe your feelings or attitudes to an object, such as a painting or a natural object.

Examples: sympathy and empathy in sentences

Which quality was Whitman illustrating in his poem? Empathy. By becoming “the wounded person,” he vicariously experiences their suffering. Is it possible to completely understand how someone else feels? Most people have to content themselves with feeling sympathy—the quality of caring about someone’s misfortunes or the feeling of emotional or intellectual accord with another individual. Neil deGrasse Tyson proposes that since “humans aren’t as good as we should be in our capacity to empathize with feelings and thoughts of others . . . maybe part of our formal education should be training in empathy. Imagine how different the world would be if, in fact, [we learned] ‘reading, writing, arithmetic, empathy.’” But if you finished your schooling, maybe these examples might help you understand the difference between sympathy and empathy:

A Canadian woman has criticised a “disgusting” sympathy card sent by two “ambulance chasing” estate agents offering their services following the death of her mother.

So I have to say that my sympathy for Tyrone would be fairly limited.

From an evolutionary standpoint, empathy is a valuable impulse that helps humans survive in groups.

People with a higher level of empathy learn to help others more quickly than their more hard-hearted peers, scientists say.