16 Types of Wordplay, with Definitions and Examples 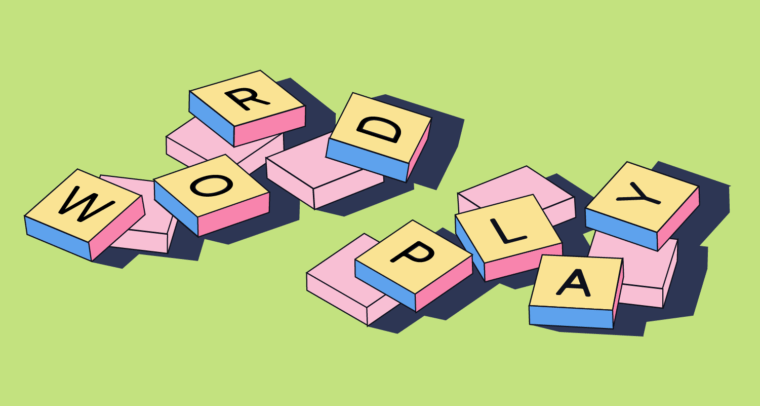 As writers, words are our raw materials. We use them to write convincing essays, create new characters, and build entire worlds. We can also manipulate words to function in new or surprising ways. We do this through wordplay.

Wordplay is a way for a writer to draw attention to their writing, typically for the sake of entertainment. If you’ve ever paused on a clever turn of phrase, like a pun or a metaphor, then you’ve encountered wordplay.

Wordplay is a literary device that authors use to draw attention to their writing, be it a detail, plot point, or character, through some clever arrangement of letters, words, or phrasing. There are many ways to incorporate wordplay into your writing, and doing it well can have various effects on a reader. Wordplay is most often used for levity—to generate a fun, entertaining, or playful atmosphere. But wordplay can also be employed in more serious situations if you want your reader to stop and think.

Are there any rules for wordplay?

There aren’t any formal rules when it comes to using wordplay. You can insert as little or as much as you’d like. It can be subtle or obvious, and it can be humorous or serious. The main objective of wordplay, as its name suggests, is to play with your words.

Examples of wordplay in literature

Some authors rely heavily on wordplay to create a playful or clever tone in their stories.

In A Series of Unfortunate Events, Lemony Snicket hides the letters “VFD” throughout the stories to signal that the main characters are in danger (which is pretty much all the time). This is a clever use of initialism because every time the reader sees three words beginning with those letters (for example: Volunteer Feline Detectives, Vinegar-Flavored Doughnuts) the reader experiences a sense of fear. Even the author’s name, Lemony Snicket, is a pseudonym, or a fake name, which itself is a kind of wordplay.

Examples of wordplay in poetry

Poetry is a great place to find wordplay. You’ll find many literary devices that are considered wordplay in poetry, such as alliteration, rhyming, and tautogram. In the poem “Washington Crossing the Delaware” by David Shulman, every line is an anagram of the poem’s title. That means if you take every letter from any line, you can rearrange them to spell “Washington Crossing the Delaware.”

16 types of wordplay with examples

Acronyms are words formed by the first letter or letters of a term. Acronyms are an important part of slang or “internet speak”—BAE, FOMO, YOLO, and even GIF. They are also found commonly throughout business, government (SCOTUS, MEDICAID, SNAP), and other sectors.

Example: In the Harry Potter series, Hermione wants to start the Society for the Promotion of Elfish Welfare (SPEW). The name is later changed to the House-Elf Liberation Front (the House-ELF).

An acrostic is a composition where specific letters form a new word or words. You’ll find acrostics in some crossword puzzles, where certain letters are circled to form a clue to the puzzle.

Example: The poet Edgar Allen Poe wrote a poem simply titled “An Acrostic.” The poem was about a woman named Elizabeth, and the letters that begin each line, when read vertically, spell “ELIZABETH.”

Alliteration is the repetition of an initial consonant sound in words that are in close proximity to each other.

Example: “And churlish chiding of the winter’s wind, / Which, when it bites and blows upon my body.” —As You Like It by William Shakespeare

Anagrams take the letters from a specific word or phrase and scramble them to create something new.

Homophones are words that sound the same but have different meanings. The most commonly used homophones are “to,” “too,” and “two.” But homophones can be used deliberately in writing to create confusion or humor.

Example: “You see the earth takes twenty-four hours to turn round on its axis—”

“Talking of axes,” said the Duchess, “chop off her head!”

Malapropism is the incorrect placement of a word or letter, resulting in a comical, nonsensical sentence.

A mondegreen is what happens when you mishear or misunderstand a phrase in a way that creates a new meaning. This happens often with song lyrics.

Boom! Crack! Pow! Onomatopoeias are words that sound like what they mean.

Oxymorons are phrases that use two contradictory words. You can use oxymorons for entertainment or for dramatic effect.

Palindromes are words that read the same backward as they do forward. These can be fun to come up with but tricky to spot.

Example: A man, a plan, a canal: Panama.

Pangrams are sentences or phrases that display all 26 letters of the alphabet.

Example: The quick brown fox jumps over the lazy dog.

Portmanteaus are two words blended together to make a new word. The word “motel” is a portmanteau combining “motor” and “hotel.” As wordplay, writers can use a portmanteau to create a new concept that hasn’t been put into words yet.

Example: In Through the Looking Glass by Lewis Carroll, Alice comes across the word “slithy,” which stumps her. Humpty Dumpty explains to her: “Well, ‘slithy’ means ‘lithe and slimy.’ ‘Lithe’ is the same as ‘active.’ You see it’s like a portmanteau—there are two meanings packed up into one word.”

Puns are one of the most familiar forms of wordplay because they’re found in spoken language just as often as in written language. Puns are jokes that rely on homophones, or two words that sound similar with different meanings. Particularly witty puns may raise eyebrows; lousy puns get an eyeroll.

The repetition of identical sounds at the end of two or more words.

Example: If you’ve been on this earth for any amount of time, then chances are you’ve seen a rhyme.

Spoonerisms happen when two letters in a word or phrase are switched, like calling a “butterfly” a “flutter by.” It’s what happens when you talk too fast and your brain doesn’t have time to keep up.

Tautograms are texts where all the words start with the same letter. Note that these are different from alliterations because in the case of tautograms, the sound doesn’t matter as long as the letters are the same. With alliteration, the letters don’t matter as long as the sounds are the same. Tautograms are most often used in poems.

Wordplay is all the ways a writer can manipulate words to create a new or surprising meaning.

How does wordplay work?

Wordplay works by tripping its readers on words they think they know. When a reader encounters wordplay, they will want to pause and think about the words being used. This helps readers notice the words themselves as well as holds their attention for a few extra seconds.

What is the purpose of wordplay?

Most often, wordplay is used to create a sense of amusement or entertainment for the reader. That’s why the word “play” is part of its title. However, wordplay can also create more serious or complex undertones if used deliberately. Metaphor is one example of wordplay that has a range of effects on its reader.