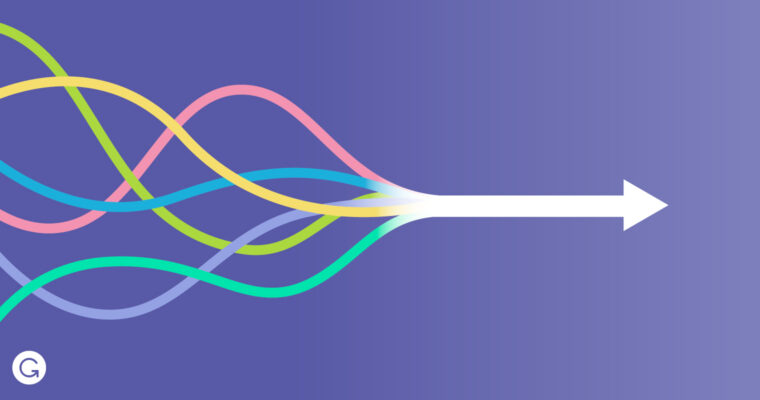 Code is much like a conversation, and misunderstandings can happen when assumptions aren’t stated upfront. It brings to mind a quote (perhaps apocryphal) from the Enlightenment philosopher Voltaire: “If you wish to converse with me, first define your terms.” Though he is unlikely to have anticipated how this advice might apply to computer science, it rings true when considering the code development process. Misunderstandings lead to bugs—which our team found out when working with our iOS text manipulation logic.

Think about characters, strings, and string indices: If you write code, you probably use these terms often and intuitively, rarely worrying about how to define them. It might be surprising, then, to consider the fact that expectations around these terms will differ widely across languages, OSes, and programmers.

We’ll show what happens when these different definitions become more than just philosophical and cause mistakes in code. We’ll also share how we found and fixed these issues in our Swift app with a trick we call “index type safety.” It’s a technique that could be useful anywhere your code depends on terms that might be overloaded but aren’t strongly typed by the system.

Grammarly provides users with a wide variety of language and communication suggestions in iOS, which means we’ve become familiar with the tricky terrain of the iOS keyboard. Since most iOS developers don’t write keyboards, we’ll begin with an overview.

The keyboard runs as a separate process in iOS, and the system provides a proxy object for accessing the text field. Due to cross-process communication and privacy considerations, the system-provided API is sparse (memory is also quite limited, but that’s a discussion for another time). Here are some of the methods involved:

Since we’re going to be talking about manipulating text, here’s an example of how you could write a domain model struct to describe an edit operation in an app:

To transform text, we first move the cursor to the position where we want to start editing. Then we delete the old text. Next, we insert the new text. And finally, we move the cursor back.

What can go wrong

While manipulating text seems straightforward, we encountered surprising bugs that looked something like this:

Here’s a hint for debugging this code: Apple’s APIs do not define what a character means. To decipher what happened here, let’s introduce some terms—which, unlike “character” and “string,” do have standard definitions (according to the of Glossary of Unicode Terms).

Grapheme cluster: Grapheme base together with any number of nonspacing marks

A grapheme is the smallest unit of text in a language; it’s what most people would think of as a character. A nonspacing mark is something attached to the character, like an accent mark or the components of an emoji.

Represented as a grapheme cluster, 👩🏼‍🏫 is equivalent to 👩+ skin tone modifier + ZWJ (zero-width joiner, used to combine emoji into a new form) + 🏫

Code point: Any value in the Unicode codespace—that is, the range of integers from 0 to 10FFFF16

Code unit: The minimal bit combination that can represent a unit of encoded text for processing

This framework helps us understand what went wrong in our text editing example. By default, Swift represents strings as a collection of grapheme clusters, and that’s what Apple’s deleteBackward method uses to index. But Apple’s adjustTextPosition method uses UTF-16 code units to index.

Even though the indices in those methods were both integers, they weren’t the same kind of integer, and it was a mistake to use them interchangeably. It’s as if two people took a measurement but one counted by feet, while the other counted by meters: Of course the numbers didn’t match up.

A brief survey of text encodings

Text encoding differs across OSes and languages because its history is as old as computer science itself—from basic 8-bit ASCII in the 1960s, to the introduction of 16-bit Unicode in the 1990s, to the latest developments in representing emojis and other rich text, which can use wide 32-bit or complicated variable-width UTF-8 encodings. Here are some of the differences to be aware of if you write code that manipulates text: 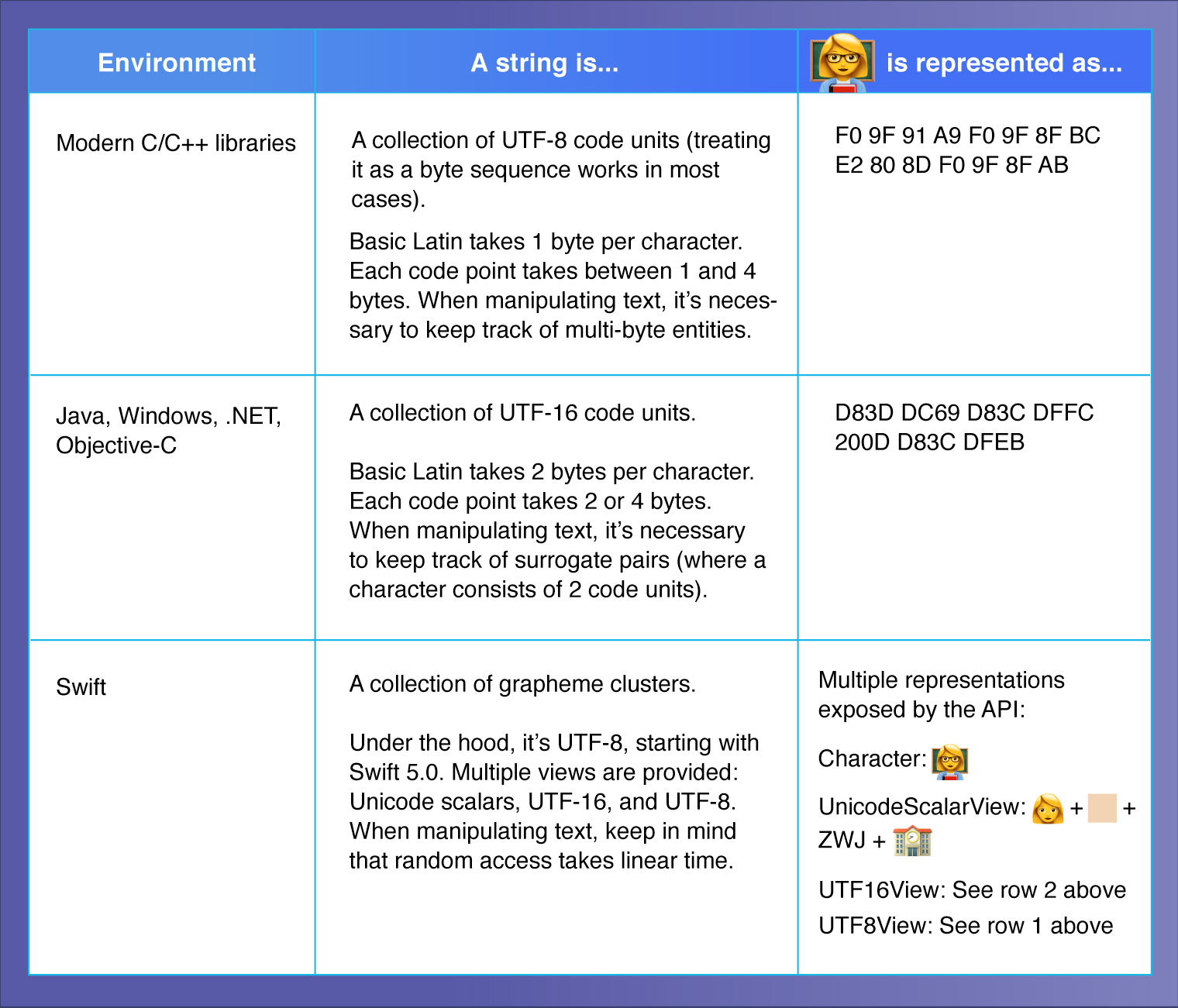 To provide Grammarly’s writing suggestions, different technologies across our back-end and front-end use and keep track of string indices. While developing our iOS keyboard app, we had a class of issues resembling the previous example. It was too hard to tell one kind of string index from another and too easy to use an index out of context, for the wrong type of text encoding.

We weren’t going to get our different technologies to agree on a single definition for “character.” But we could bring the underlying assumptions into the light, and know which definitions we were applying. For example, we could clearly differentiate between UTF-16 and grapheme cluster indices.

The solution we developed was to leverage the type system and create stronger types for string indices. Stronger typing enforced consistency, making our string-manipulation code both safer and more readable.

Here is the wrapper for the index that counts by grapheme clusters (which is what the Character type represents in Swift):

Next, we made a wrapper for the index that counts by UTF-16 code units:

One generic to wrap them all

A lot of copying and pasting is usually an indicator that there’s a better solution. And there was: We found we could make our wrapper generic over all kinds of collections.

To do so, we used the concept of a phantom type (a type that is not used to store any data, just to satisfy the type system). We made the wrapper type generic, and put the collection type as a generic parameter:

We refined the Collection protocol to support a typed index:

Finally, we conformed existing collections to the new protocol:

Note that String and Substring are different types in Swift, with the substring containing a reference to the original string (this avoids duplication). The indices are compatible, so to handle substrings, we defined a custom implementation referring to String:

Index type safety helps us avoid the bug in our previous example:

We can check for index type safety to prevent bugs:

Notice that the type system prevented us from using the default `offset(_:by:)` API—we had to write our own implementation with the correct index conversion baked in.

Finally, we can update our APIs to use indices in a type-safe way:

It’s hard to have a productive conversation, much less a well-functioning program, when you haven’t defined your terms ahead of time. We used type safety to define our string indices and avoid some of the pitfalls of developing for the iOS keyboard in particular, and for text manipulation in general. We hope something in this discussion is applicable to your own work, wherever underlying assumptions might be lurking. If you’re interested in helping solve problems like this one at Grammarly and helping to improve lives by improving communication, come join our team—check out our list of open roles.