Top 5 Most Frustrating Writing Mistakes (and How to Avoid Them) 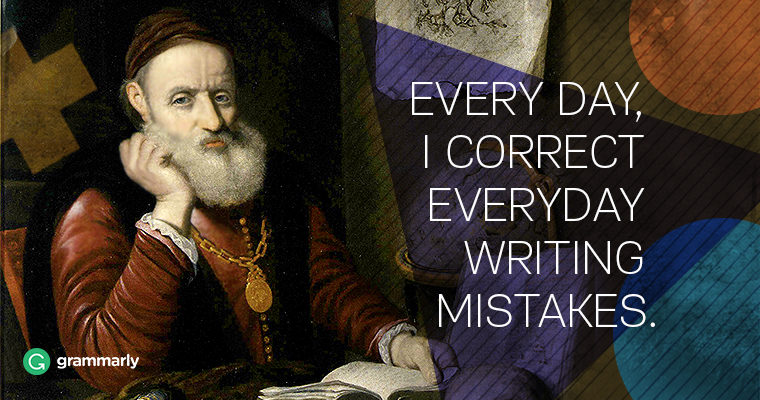 Recently Grammarly asked its social media communities which writing mistakes were the worst kinds of errors. Our fans tend to find substantive grammatical trip-ups, like verb errors, far more frustrating than typographical errors and “stylistic” errors, such as homophone misspelling and preposition placement. 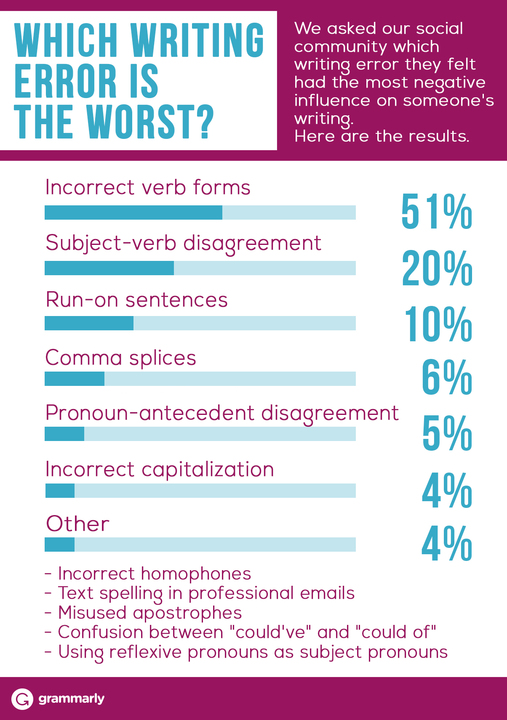 Here are the top five worst writing mistakes and how to avoid and correct them.

Irregular verb forms are one of the most difficult grammar concepts to master, even for native speakers—many of whom use incorrect irregular forms without realizing it. While these “mistakes” are part of English dialects all over the world, these non-standard forms carry a stigma that can significantly damage your credibility if used in formal settings, like business or school. Here are the most common verb conjugation mistakes:

I been vs. I have been

We was vs. we were

In many languages, it is important that the subject of the sentence aligns correctly with the verb conjugation in terms of number and gender. Since English does not conjugate verbs to reflect the gender of the subject, you only need to pay close attention to the number of the subject—is it a singular or plural noun?

The struggles that the horse experiences while climbing the mountain is intense.

Here the subject the struggles does not align with the verb “is.” Because struggles is plural, the verb should be are.

The struggles that the horse experiences while climbing the mountain are intense.

Jane and Mark are running a marathon this month.

According to Grammarly’s research, run-on sentences are among the top grammar mistakes made by writers worldwide. A run-on sentence contains two or more independent clauses (a group of words that contains a subject and a verb and that can stand alone as a sentence) that are not connected with correct punctuation. Though there are different kinds of run-on sentence errors, most often writers neglect to use a comma before a coordinating conjunction (and, but, or, etc.).

To splice means to connect or join. When a writer joins two independent sentences with a comma instead of separating them with a period or a coordinating conjunction, that’s a comma splice.

The comma has its own jobs to do, but connecting two independent sentences isn’t one of those jobs. Besides, the period gets testy when his sister, the comma, steals his thunder. Periods have their jobs, and so do commas, but never the twain shall meet—unless it’s in the form of a semicolon. Semicolons can also take the place of a coordinating conjunction, such as “and,” “but,” or “so,” among others.

When you use the pronouns “her” or “him,” readers need to know to whom those pronouns refer. A pronoun without a clear antecedent is ambiguous.

In our example sentence demonstrating an ambiguous pronoun, the reader is unsure who the second “he” is. Was John in the way, or was there another “he” involved? As noted in the corrected example, the pronoun “he” refers to Tim, who is card-blocking Helga. Always be sure your pronouns refer to a specific antecedent.

Additionally, 5% of respondents said that the worst error was not listed in the poll. Participants listed homophone, apostrophe, and contraction spelling errors as the most frustrating, while others cited using textspeak in professional settings and plagiarism as the most egregious writing mistakes.

What do you think? We love hearing from our community.

Share this infographic on your blog by copying and pasting the following embed code to your blog editor.