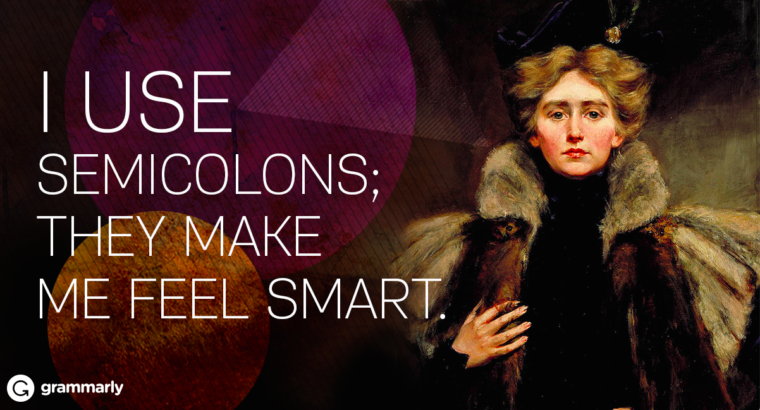 What Is a Semicolon?

Semicolons (;) are as basic as a period stacked on top of a comma. Does that mean you can use it like either one? Don’t get your hopes up. But don’t let this punctuation mark get you down, either. After all, that sly emoticon winky eye can’t be all bad. 😉

Write with confidence.
Grammarly will make sure your writing is clear and mistake-free.
Get Grammarly

How to Use a Semicolon Correctly

The most common use of the semicolon is to join two independent clauses without using a conjunction like and.

We can go to the museum to do some research; Mondays are pretty quiet there.

Remember, semicolons are not interchangeable with commas or periods. Instead, they’re somewhere in between: stronger than a comma but not quite as divisive as a period. Sounds pretty cunning to us.

Here are the rules for using semicolons correctly; we hope you’re taking notes.

I ordered a cheeseburger for lunch; life’s too short for counting calories.
Money is the root of all evil; I don’t believe the reverse is necessarily true.
Martha has gone to the library; Andrew has gone to play soccer.

Notice that the letter following the semicolon is not capitalized. The examples above are both made up of two complete, grammatically correct sentences glued together. Yes, that means there are six total sentences up there—and thanks to the semicolon, only two capital letters. That’s exactly why you can’t substitute a comma for a semicolon. Using a comma instead of a semicolon in the sentences above would result in a comma splice. And there’s nothing as painful as a comma splice.

2. Delete the Conjunction When You Use a Semicolon Between Two Independent Clauses

A semicolon isn’t the only thing that can link two independent clauses. Conjunctions (that’s your ands, buts, and ors) can do that too. But you shouldn’t use a semicolon and a conjunction. That means when you use a semicolon, you use it instead of the ands, buts, and ors; you don’t need both. Here’s a hint: if you used a comma and an “and” to link two related ideas, think of the period (you know, the top part of the semicolon) as a replacement “and.”

You need a comma plus something to avoid a comma splice. That something can either be the right conjunction or the period that turns a comma into a semicolon. If semicolons can link independent clauses that would otherwise have a period or a conjunction between them, that means they can demonstrate contrast, too. This is part of the same rule, but the conjunction in question is “but” instead of “and.” In other words:

This is part of the same rule; the conjunction in question is “but” instead of “and.”

To summarize, a semicolon links up two related ideas by narrowing the gap between the ideas of two separate sentences or by replacing a conjunction between two related ideas. That goes for showing contrast, too: just because two ideas are opposed or contradictory, that doesn’t mean they aren’t related closely enough to earn themselves a semicolon.

You can use semicolons to divide the items of a list if the items are long or contain internal punctuation. In these cases, the semicolon helps readers keep track of the divisions between the items.

I need the weather statistics for the following cities: London, England; London, Ontario; Paris, France; Paris, Ontario; Perth, Scotland; Perth, Ontario.
My plan included taking him to a nice—though not necessarily expensive—dinner; going to the park to look at the stars, which, by the way, are amazing this time of year; and serenading him with my accordion.

Let’s recap: so far we’ve got semicolons for linking two independent clauses; replacing a conjunction (whether showing similarity, like “and,” or opposition, like “but”); and long, comma-loving lists. Yup, that was one now.

4. Use Semicolons With Conjunctive Adverbs

When you have a conjunctive adverb linking two independent clauses, you should use a semicolon. Some common conjunctive adverbs include moreover, nevertheless, however, otherwise, therefore, then, finally, likewise, and consequently.

I needed to go for a walk and get some fresh air; also, I needed to buy milk.
Reports of the damage caused by the hurricane were greatly exaggerated; indeed, the storm was not a “hurricane” at all.
The students had been advised against walking alone at night; however, Cathy decided walking wasn’t dangerous if it was early in the evening.
I’m not all that fond of the colors of tiger lilies; moreover, they don’t smell very good.

These words sometimes show up in other parts of a sentence; therefore, the semicolon rule only applies if it helps the conjunctive adverb join two independent clauses. (See what we did there?) This conjunctive adverb rule is similar to the conjunction rule. In both cases, check that the two ideas are independent clauses that could stand on their own as sentences. If so, then you’re grammatically good to go as far as the semicolon is concerned.

5. Use a Semicolon to Give a Wily Wink

Emoticons will never replace a solid knowledge of the English language. But they can sure spice it up from time to time. 😉 The semicolon is a good punctuation mark to have in your back pocket. Or on top of your parenthetical smile. So whether you’re using it to whip up a good complex sentence or to give someone a wink, now you know how to do it right.

GrammarWhat Is the Present Perfect Tense?

GrammarWhat Are Modifiers? How to Use Them Correctly, with Examples

GrammarWhat Is a Predicate, and How Does It Work?

GrammarWhat Is a Participle? Definition and Examples
Writing, grammar, and communication tips for your inbox.